At first blush a martial arts black belt and a PhD don’t seem to have a lot in common. One is evidence that you’ve become a stone-cold killer while the other is… well whatever egghead certificate a PhD actually is.  But scratch the surface and striking parallels emerge. I’ve been a PhD for over 20 years and a black belt for a few years but I increasingly see the two as more similar than different. 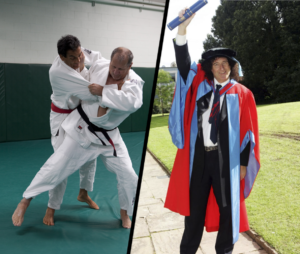 Actor Ed O’Neil is a Brazilian Jujutsu blackbelt under Granmaster Rorion Gracie (in the red belt). On the right, Brian May, lead guitarist of Queen, has a PhD in astrophysics from Imperial.

A PhD and a black belt represent the highest attainment a student can receive in their discipline, be it academia or combat sports.  According to 2013 census data, just under 2% of the US adult population hold a PhD while less than 1% hold a black belt in a recognized martial art from an accredited school (as opposed to a “McDojo”).  One reason they are so rare is that both involve a long (and sometimes gruelling) process that many people begin but very few complete.

To earn a PhD typically requires 3-8 years of schooling beyond the undergraduate level and may include a Master’s degree along the way.  Good critical thinking skills, strong oral and written communication, and a decent overview of a topic area constitute the basic requirements for starting a PhD.  True expertise is then developed during the doctorate as the student explores their research area in greater depth while learning a set of investigative techniques necessary to make their own novel contributions to the field.

Unlike a PhD, there are no requirements before starting a martial art – anyone can do it with no experience necessary.  A basic level of fitness certainly helps, but the student will acquire the physical and mental tools needed during the training.  Strength, flexibility, and conditioning are the core physical aspects, but discipline, mental resiliency, and control are also critical to success.  The training will teach fighting techniques such as striking, wrestling, or grappling and will provide experience in live sparring.  Everyone starts as a white belt (beginner) and the length of time to shodan (black belt) depends on the discipline.  In taekwondo it takes about two years to earn your black belt, while judo and karate normally take four to six.  Brazilian jujutsu famously averages ten years, although exceptionally gifted practitioners have done it more quickly.  Personally, it took me seven years to earn my (Japanese) jujutsu black belt which, by coincidence, was also the length of my PhD.

The final step of the journey is a fairly intense exam designed to showcase the student’s knowledge and skills.  There is an enormous difference between a good research assistant and a PhD or between a brown belt and a black belt, and the final exam is designed to maintain this high standard.  It is the student’s job to thoroughly prepare themselves but it is the instructor’s job to decide when their student is sufficiently ready that they will make a respectable attempt.

For PhDs, the exam is known as the viva voce (commonly called the viva, or defence).  Some vivas include a public presentation of the work but the main component is an intense, private defence of the student’s research to senior colleagues (i.e. professors) who will grill them for several hours on all aspects of the thesis work.  This oral examination typically covers everything from the rationale for doing the work to the fine details of the research, through to its real-world impact and significance.  In the process they will test not only the understanding of the material and techniques, but also critical thinking skills and the ability to perform under pressure.

Most martial arts require a similar test for promotion to black belt. There are typically three parts to the grading: a fitness stage, a demonstration of techniques, and the kumite (pronounced koom-ah-tay), or series of fights, designed to test conditioning, skills, and fighting ability, respectively.  These gradings often last several hours and end with the kumite, essentially hand-to-hand combat against a series of opponents, most of which are more skilled fighters than the student.  Winning all the fights isn’t necessary but keeping going without losing control demonstrates skills, ability and heart, the most crucial elements.

Many people do not pass their viva or kumite the first time.  It’s hard precisely because the standard is high.  There is no such thing as an easy PhD or black belt.  Of course the difficulty varies from person to person, but no one gets a free ride; the student has to truly earn the degree, making it a genuine accomplishment.

Albert Einstein lecturing at Lincoln College on the left. Rickson Gracie, on the right, teaching a seminar at his academy.

You really don’t understand something until you can teach it to others.  Is a newly frocked PhD or black belt ready to teach? Probably not.  Even the most gifted researchers or the world’s top fighters do not necessarily make the best teachers – although a few exceptional people excel at both.  Being expert in a field is not sufficient to be a good teacher; it also requires outstanding communication skills, an appreciation that people learn differently, and a facility for organizing information to match the needs of the students. In other words, knowing the material is a necessary, but not sufficient, qualification for teaching.

The transition from PhD to Assistant Professor is a sharp one unless one’s had the opportunity to gain teaching experience along the way.  Generating a curriculum, lectures, readings, practicals, and on-line materials can be daunting without sufficient preparation.  As a result, it is now common practice for academic staff to get additional training in teaching.  In the UK, the Higher Education Academy (HEA) offers teaching accreditation to supplement the PhD’s specialist knowledge and facilitate their ability to share their expertise.  In fact, many universities require HEA accreditation for all new academic staff to help ensure they offer high quality teaching.

Martial arts instructors go by many different titles. In Japanese arts such as karate, judo and jujutsu, instructors are called Sensei (“one who has gone before”), while in the Chinese arts such as kung-fu they are called Sifu (“skilled person”). Brazilian jujutsu has adopted the title Professor for their instructors in a direct parallel to the academic path.  Whatever the title, newly frocked black belts are not immediately ready to teach.  Normally, they gain experience volunteering as an assistant instructor at an existing club for several years before starting their own.  This not only provides teaching experience, it also affords additional time for their own martial skills to continue to develop and improve.  Some disciplines supplement this informal guidance with teacher-qualification courses to explicitly train their people on how to be a good instructor.

It is worth noting that the majority of people who receive a PhD do not go on to teach; instead they use their degree to open doors in industry, media, government or the charity sector.  It is estimated that roughly 25% of all PhDs go on to become professors with even smaller numbers of black belts becoming instructors (under 10%).  Those who do become teachers often do it in order to give back to the community that supported them through their own journey towards mastery.

Most people will see the PhD or black belt as demonstrating mastery of your field – s/he is now a boffin or brawler extraordinaire! A very different view exists inside the community, however, where the recent promotion can be best summarized as “a good start.”  Celia Sells, a long-time martial arts instructor, says:

Having a black belt is generally understood, among serious martial artists, to be the point at which you can say “I’m a serious student now. I have the basics down, I’m learning to really use my body, and I know how to learn this style.” It does not mean you are invincible, either against random bad guys or against martial artists (either of your own style or other styles).

Exactly the same perspective exists in academia.  The PhD indicates that the student has obtained all the necessary skills to become a good researcher.  They have learned enough to know how to learn and this marks the beginning, rather than the end, of the academic journey.  Those who continue in their discipline find that they learn more quickly and efficiently as they gain experience.

The idea that a PhD or a black belt is at best a “good start” is probably the most difficult concept to convey to people who see them as ends in themselves.  The founder of judo, Jigoro Kano, created the black belt to signify completion of the first step of training.  The belt itself is nothing more than an over-priced strip of black cotton just as the PhD diploma is an over-priced piece of vellum.  They are, however, significant indicators that the student has begun an important journey and shown considerable potential with the first steps.