Taking care of our environment

We're very proud to be recognised by UCL as the greenest department (9 years in a row and working hard to make that 10!) and we're on a mission to improve the impact of UCL's estate, build community and further research. 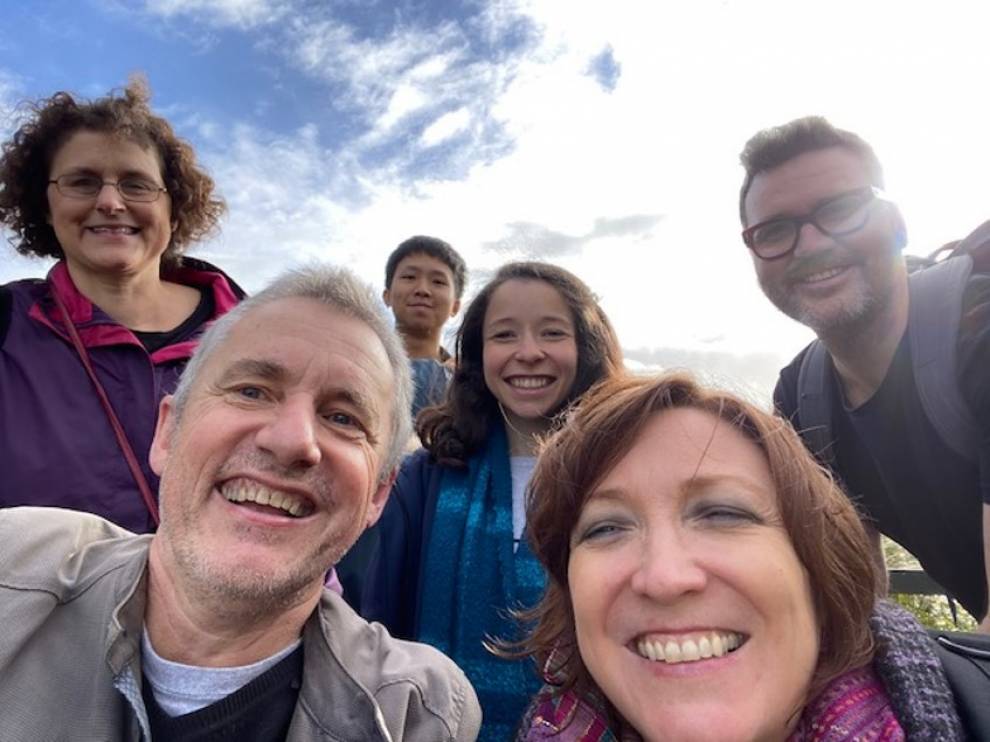 The PALS Green Impact Team visited the London Wetland Centre. Find out what team have been up to and what their plans are for 2022-23.

Preparing future psychologists for the impact of the climate crisis

A new UCL module is equipping Psychology & Language Sciences (PALS) students with the knowledge and skills they will need in their future careers to engage with the threat posed by the climate crisis.

“The climate crisis poses an existential threat to the natural environment and human societies alike,” argues Professor Kate Jeffery, who co-founded and organised the module with Jona Leka, a  PALS PhD student who is the graduate teaching assistant on the course, along with John Draper, head of administration at PALS and a long-time champion and innovator in green initiatives at UCL. Kate adds “It is fundamentally a problem of human psychology and behaviour, with profound consequences for current and future wellbeing. Therefore, it is an important topic for psychologists to engage with, and this course aims to equip students with the knowledge and skills with which to do this.”

Within the module, now led by Fred Dick and Jeremy Skipper at PALS, students on the Psychology of Climate Change module are taught about the causes and consequences of climate change. These include lectures on the physics of climate change and the emergence of the Anthropocene, as well as sessions using interactive simulations of climate change mitigation. Students are especially benefitting from an interdisciplinary approach that has been supported by lectures and interaction with academic staff in other UCL departments, particularly Geography.

The module also explores how people make sense of climate change cognitively and emotionally, including why some people deny facts about climate change, as well common emotional reactions, such as anxiety, grief and hopelessness, or resilience, campaigning and activism.“We ask them to consider factors that enable or impede pro-environmental behaviours, as understanding these changes can improve the success of initiatives to change behaviour,” adds Professor Jeffery.

On Wednesday we welcomed Bill McKibben to discuss the psychology of destroying a planet. For those of you who do not already know him, Bill is an internationally acclaimed environmentalist and climate activist, currently at Middlebury College in Vermont, USA. Among other books, he wrote The End of Nature (1989), considered the first general audience book on global warming. He also regularly writes for magazines such as the New Yorker and Rolling Stone, is a fellow of the American Academy of Arts and Sciences and has honorary degrees from 20 colleges and universities. Bill has been awarded the Gandhi Peace Prize and Right Livelihood Award. He also helped found 350.org, the first global grassroots climate campaign.

A recording of Bill's Seminiar will be added at a later date. PALS started a vegetarian food only initiative in 2019, and since then, much of UCL has adopted it. As a University, we are now providing over 95% vegetarian food for all hospitality events. What an achievement for the PALS Green Impact Team – well done! Find out more about our 100% Veggie initiative here. We won gold in the Green Impact, LEAF lab, and Outstanding Sustainability Plan categories! The PALS Green Impact Team also recieved a special award in recognition of their unique initiatives, such as 'PALS No Fly Zone' and 'Powered by Plants', which continue to inspire other departments and lead the way on sustainability at this University.

Sustainable UCL have planted 8 'trees for life' in PALS' name at the UCL Grove (located in the Scottish Highlands) *(one tree can consume approximately 60kg of CO2 from the atmosphere). They also handed out award certificates printed on seeded paper, which the PALS Team have planted in the Bedford Way Common Room.

Well done to all the other winners & participants, and thanks to Sustainable UCL for hosting the awards. Find out more about our Faculty's sustainability pledges here. 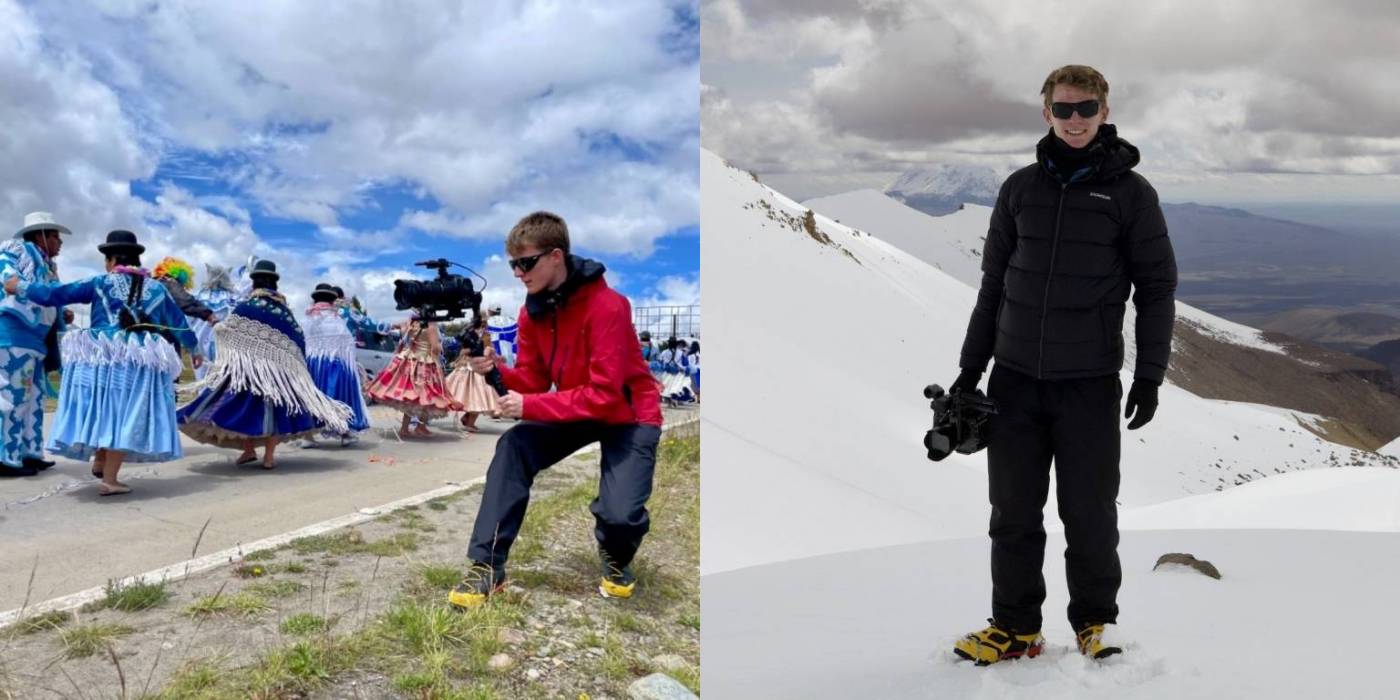 Toby Nash is a filmmaker and 1st-year UCL PALS psychology student who has just started filming his 1st feature-length documentary in the Andes Mountain Range.
He is using the 5000km journey as a vessel for important messages about sustainability. Find out more here. 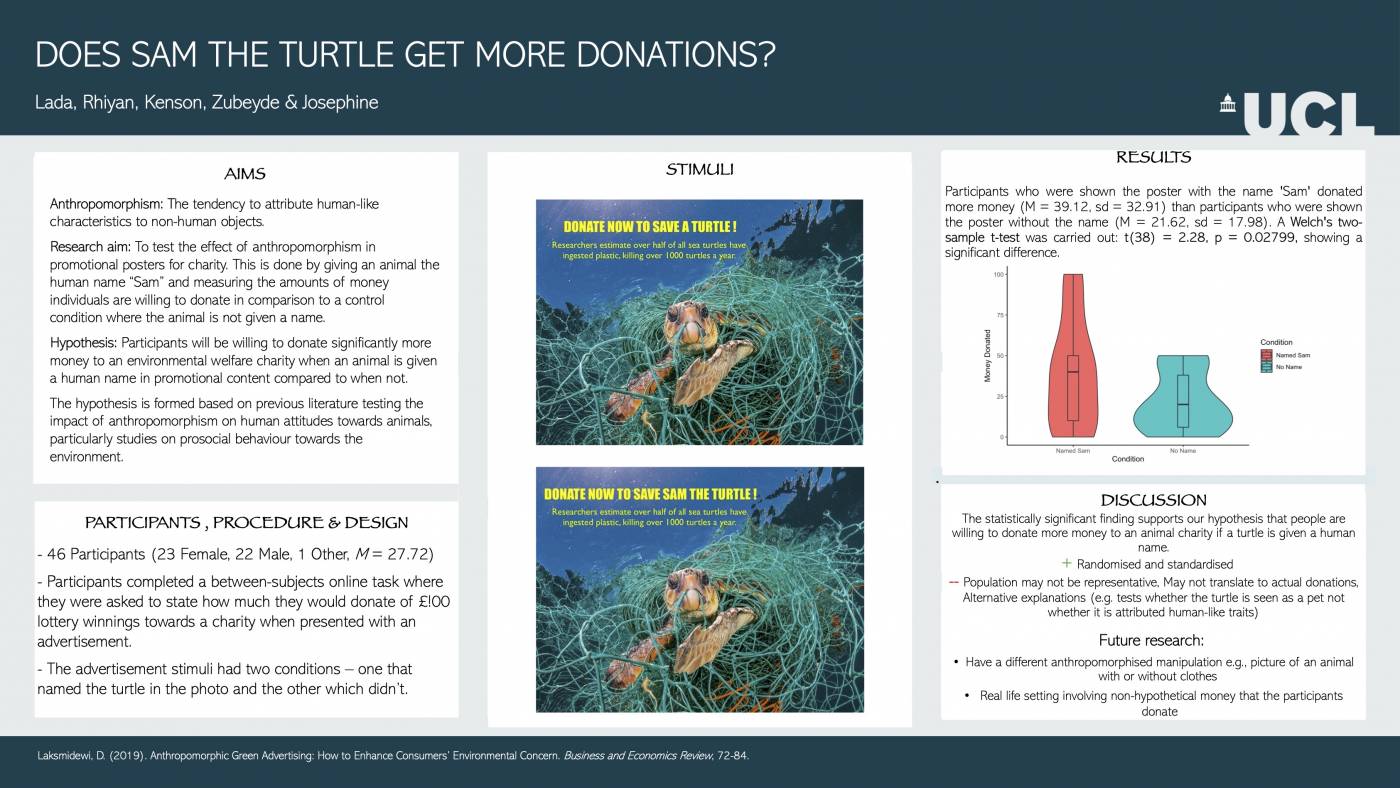 PALS 1st Year Sustainability Poster Competition: This year, students presented their research on the question: "What makes people donate to charity?" The idea was to encourage the UCL PALS student community to think about environmental charities. At the end of the online experiment, participants were directed to the “PALS Green Team Fundraiser” JustGiving page where they donated a total of £396. This sum was matched by the Division of Psychology and Language Sciences to make a total of £792. Find out more here. 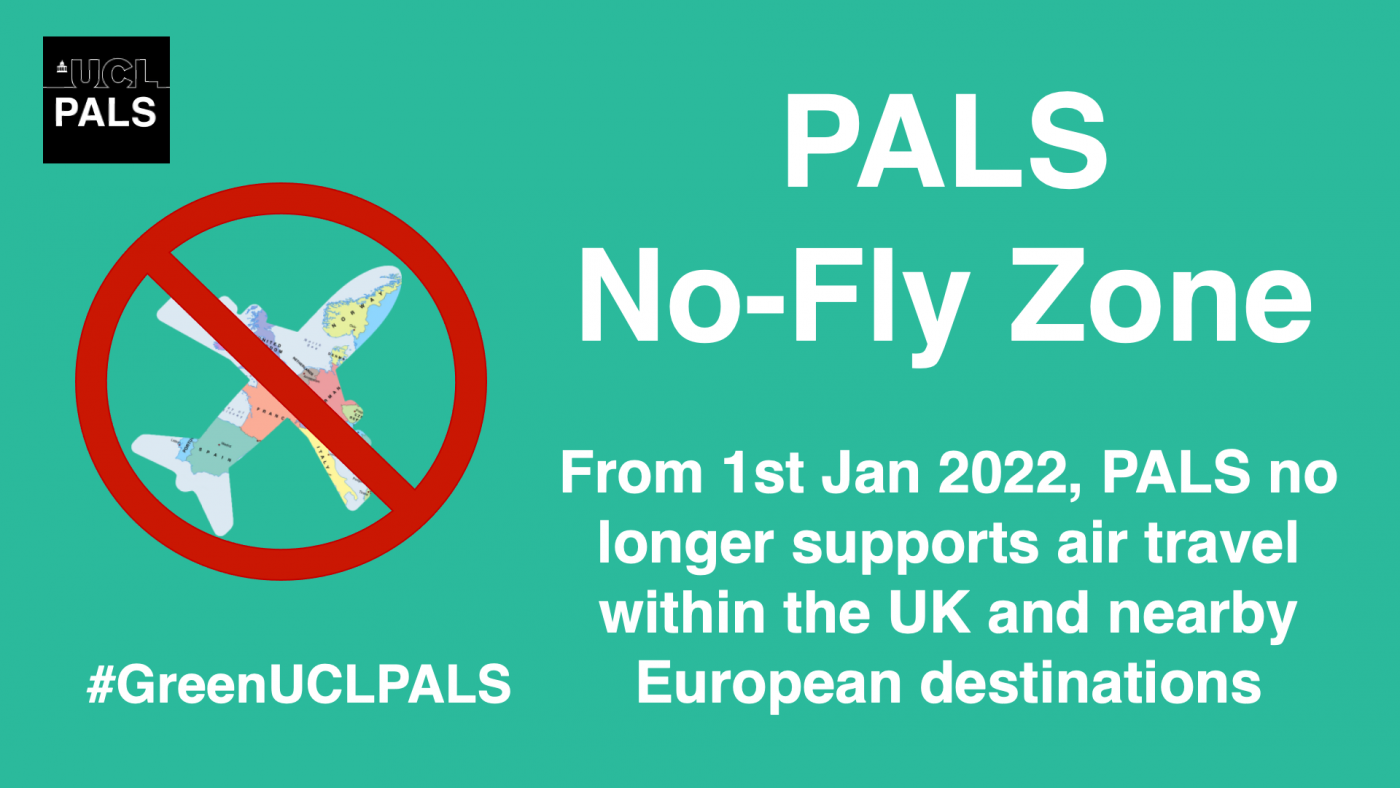 We are thrilled to announce that from 1st January 2022, PALS launched the 'PALS No-Fly Zone' initiative - where we no longer supports air travel within the UK and nearby European destinations. Find out more here.

Congratulations to the UCL PALS Green Impact team for their outstanding success at UCL's 2021 #UCLSusAwards Ceremony. We won gold in the Green Impact Award categories and LEAF lab awards, and were especially commended for our Sustainability Plan which included a UCL-high of 20 sustainability excellence projects which in effect recognises us as UCL’s greenest department for the 8th year in a row!  Well done to all the other winners & participants, and thanks to Sustainable UCL for hosting the awards. UCL PALS Green Impact Team Visit Hackney Marshes: On 9th November 2021, 11 members of the UCL PALS Green Impact Team walked 6 miles in Hackney marshes to visit 3 of its wildlife reserves, a Sustainable Spices Initiative (SSI) and a park with an amazing collection of trees. The idea was to see how the area has been impacted by humans throughout history whilst COP26 was taking place. Find out more here. 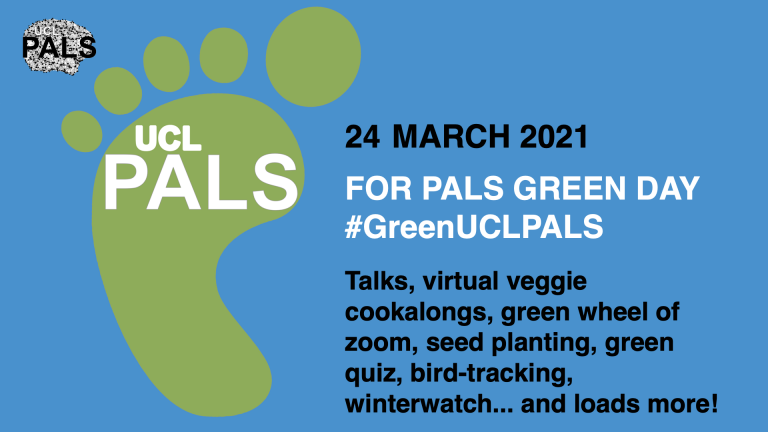 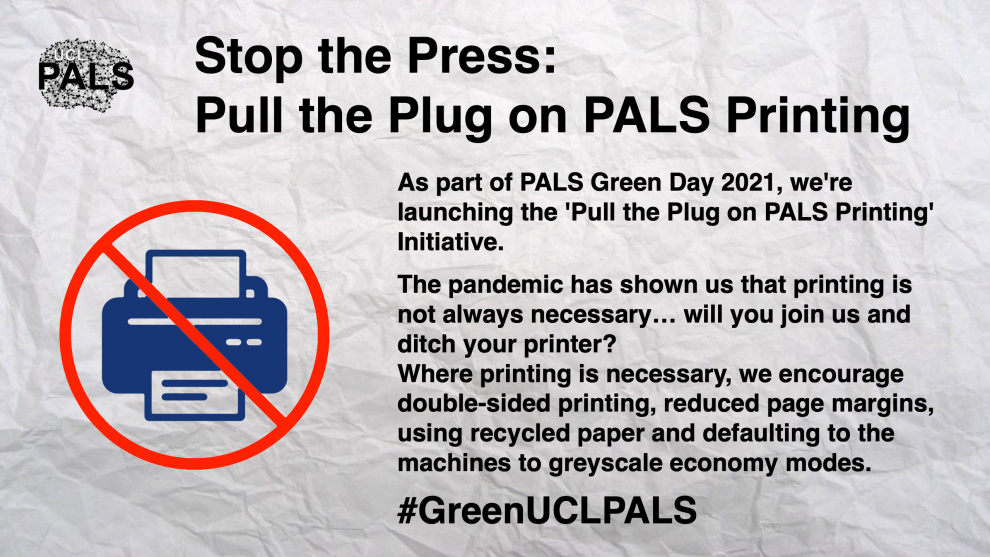 As part of PALS Green Day 2021, we launched the 'Pull the Plug on PALS Printing' initiative. The pandemic has shown us that printing is not always necessary… will you join us and ditch your printer? Where printing is necessary, we encourage double-sided printing, reduced page margins, using recycled paper and defaulting to the machines to greyscale economy modes. Find out more here. 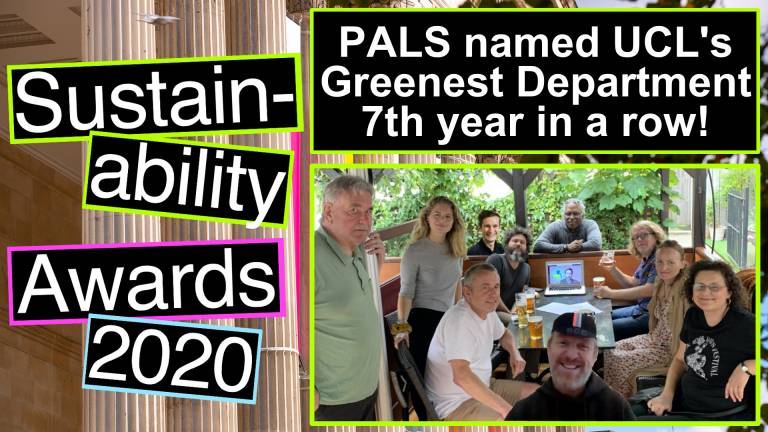 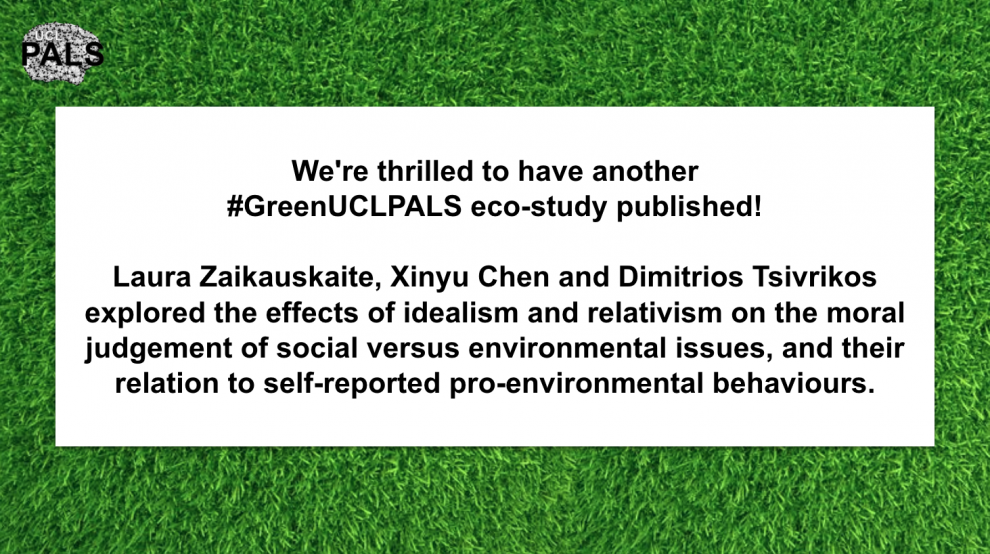 We're thrilled to have another #GreenUCLPALS eco-study published!  Laura Zaikauskaite, Xinyu Chen and Dimitrios Tsivrikos explored the effects of idealism and relativism on the moral judgement of social versus environmental issues, and their relation to self-reported pro-environmental behaviours. Find out more and download the paper here. 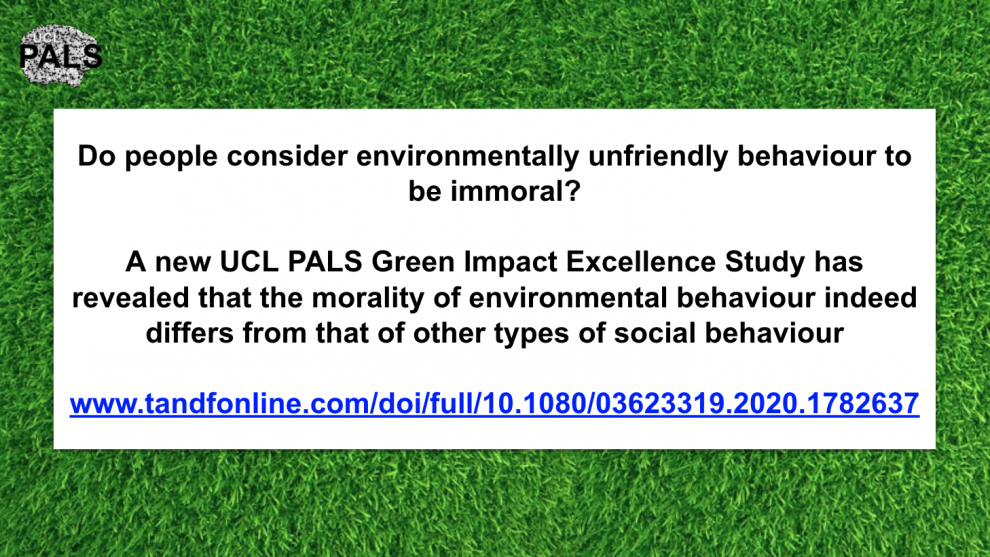 Do people consider environmentally unfriendly behaviour to be immoral? A new UCL PALS Green Impact Excellence Study has revealed that the morality of environmental behaviour indeed differs from that of other types of social behaviour. Read the paper here. 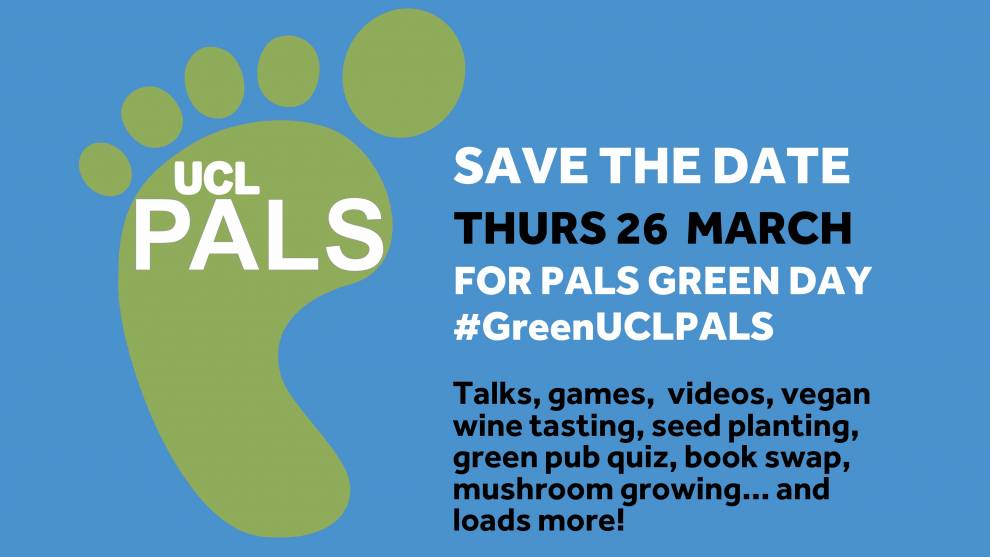 We are delighted to announce this year’s UCL PALS Green Day #GreenUCLPALS. We have a green-packed programme of events across our various PALS sites (Bedford Way, Chandler House and Alexandra House) including the infamous green feet, seed-planting, sustainability talks, green-themed films, vegetarian food, vegan wine tasting... and loads more. We will keep this webpage updated with the latest information about the event: ucl.ac.uk/pals/pals-green-awareness/pals-green-day-2020 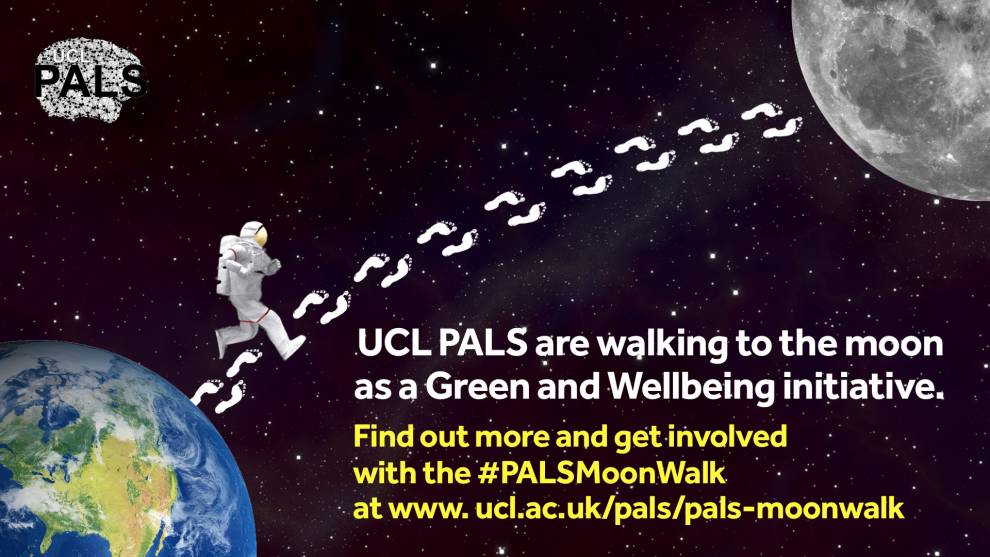 UCL PALS are walking to the moon as a Green and Wellbeing initiative.

Find out more and get involved with the #PALSMoonWalk at www. ucl.ac.uk/pals/pals-moonwalk 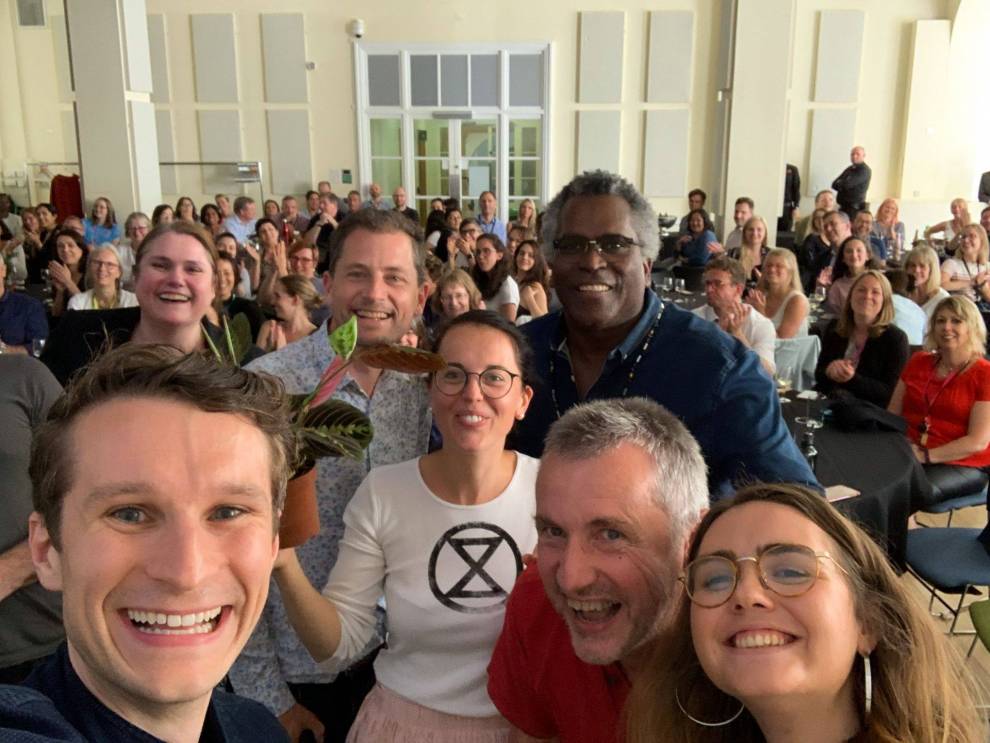 Congratulations to the UCL PALS Green Impact Team who picked up numerous awards at the 2019 UCL Green Sustainability Awards. We’re UCL’s greenest department for the 6th year in a row and John Draper won a Lifetime Achievement Award for all his amazing green impact work over the years. 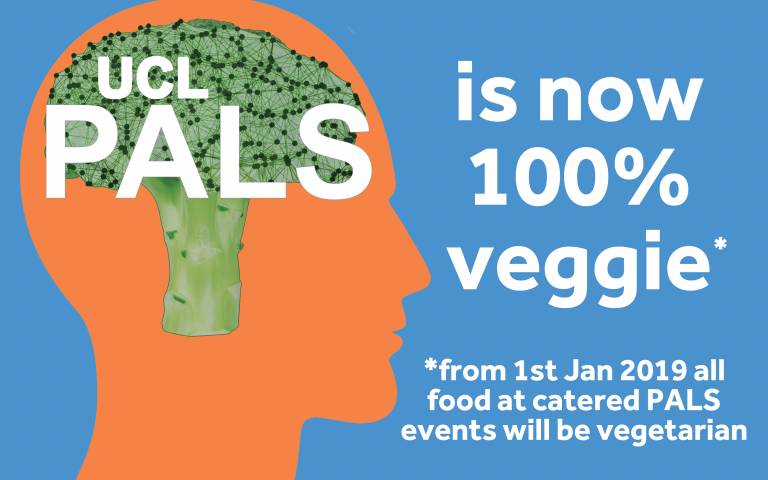 We are thrilled to announce that from 1st January 2019 all food provided at catered UCL PALS events will be 100% vegetarian. Find out more about our 100% Veggie initiative here.

The UCL PALS Green Impact Team hosted an Extinction Rebellion talk "Heading for extinction & what to do about it" as part of #PALSGREEN19. Watch the talk, featuring Professor Kate Jeffery, here. 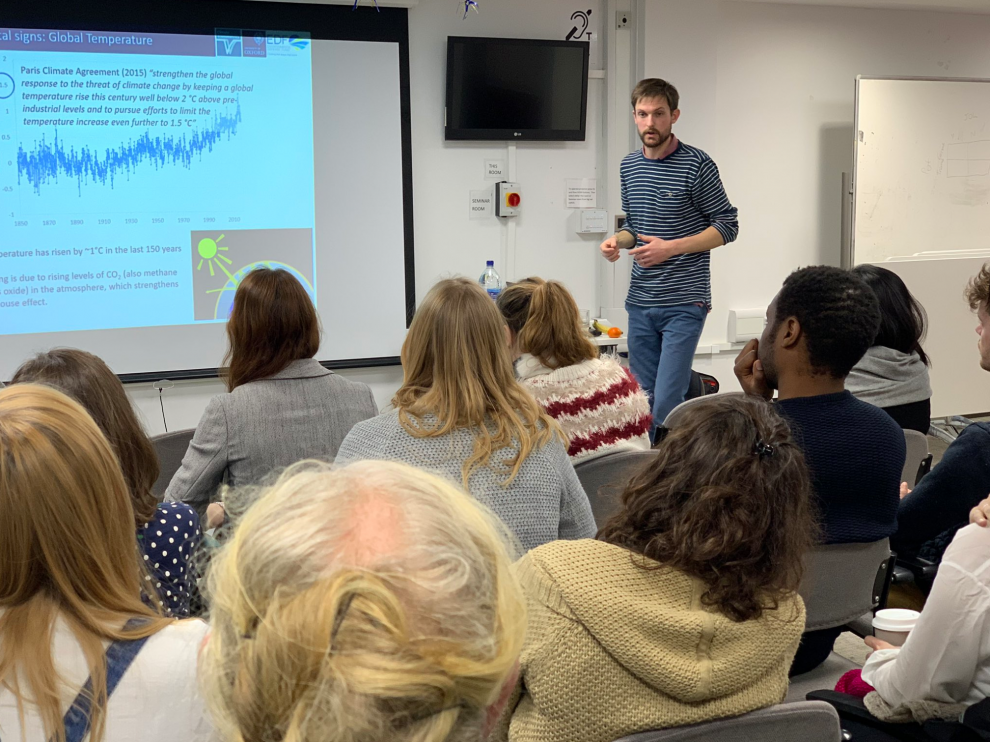 UCL PALS Green Team members Sabine Topf and Paul Troop are looking at ways of reducing the quantity of waste produced by UCL and increasing the proportion that is recycled.

To find out more about how waste is treated by UCL, they conducted a research trip to the plant where UCL's waste is disposed of. They were given a tour of the plant and gained insight into the processes involved.

UCL waste that is not recycled or treated as food waste is sent by train to a plant in Bristol. There it is incinerated. Heat from the process is used to heat steam, which is fed through turbines to generate electricity. Ash that remains is used to make building blocks. None of the waste goes to landfill.

Find out more about the UCL PALS Recycling Field Trip by clicking here. 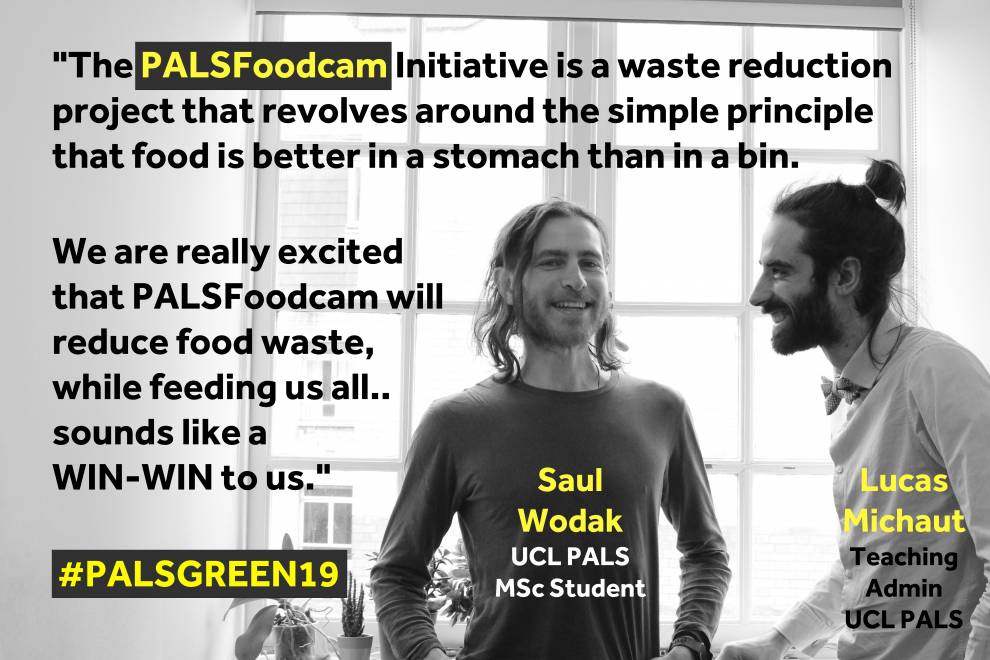 The #PALSGREEN19 Foodcam Initiative is a waste reduction project started by the PALS Green Impact Team that revolves around the simple principle that food is better in a stomach than in the bin. Find out more here: ucl.ac.uk/pals/pals-green-awareness/foodcam 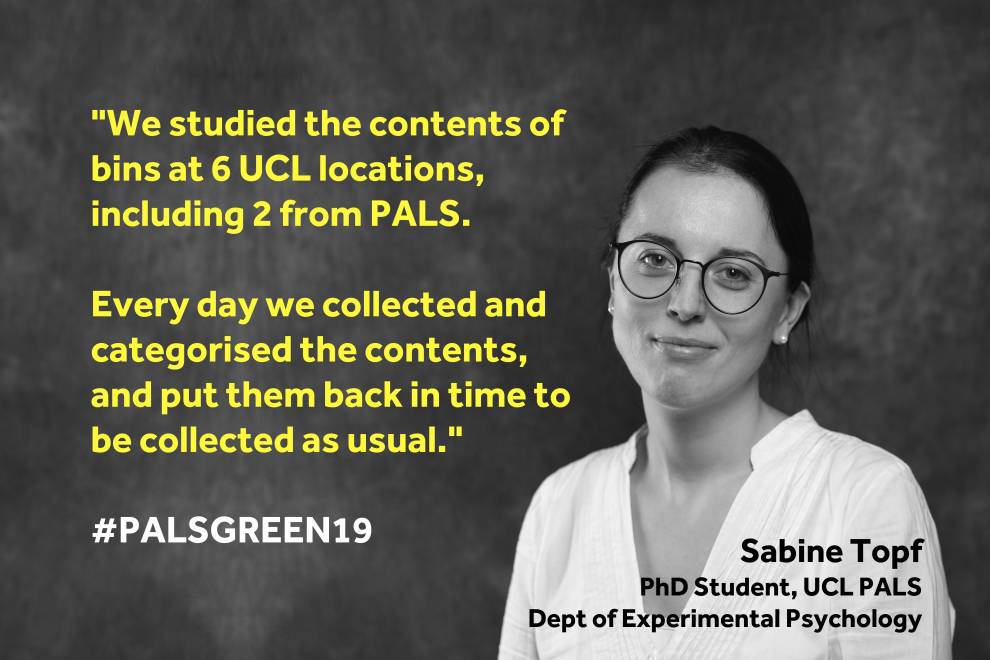 For several weeks, UCL PALS Student Sabine Topf and colleagues studied the contents of the mixed-recycling and non-recyclable bins in six locations at UCL, including 2 from PALS.  Each evening they emptied the bins, categorised the contents and put them back in time to be collected as usual. Find out more about this #PALSGREEN19 project by clicking here: ucl.ac.uk/pals/pals-green-awareness/studying-contents-bins-ucl The UCL PALS Green Impact Team have helped prepare vegetarian and vegan meal options in the UCL IOE canteen as part of one of the UCL PALS #PALSGREEN19 initiatives. Find out more here: ucl.ac.uk/pals/pals-green-awareness/helping-prepare-veggie-and-vegan-food-options-ucl 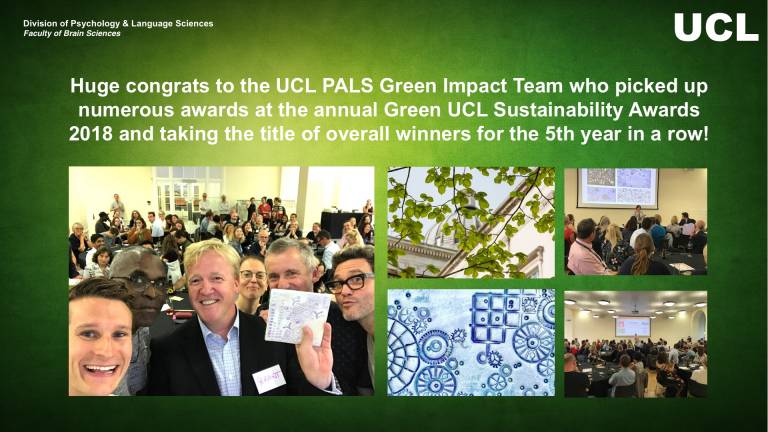 Watch the video the UCL PALS Green Impact team made on their trip to the Eden Project in Cornwall:

We are delighted to announce that we have been awarded UCL Sustainability Leaders and UCL's Greenest Department at this year's Green Impact Awards Ceremony.

Our excellence projects also won multiple awards, such as Platinum award for Labs, Excellence for Office and Excellence for Special Projects. You can find out more about the UCL Sustainability Awards on the Green UCL website.

Here are some of the projects that we are really proud of:

The UCL Environment Awareness e-Learning course focuses on environmental good practice and is an essential introduction to sustainability at UCL.

Ways you can help:

Contact the Divisional Green Team for advice. If you want to join the Green Impact Team then please contact John Draper. 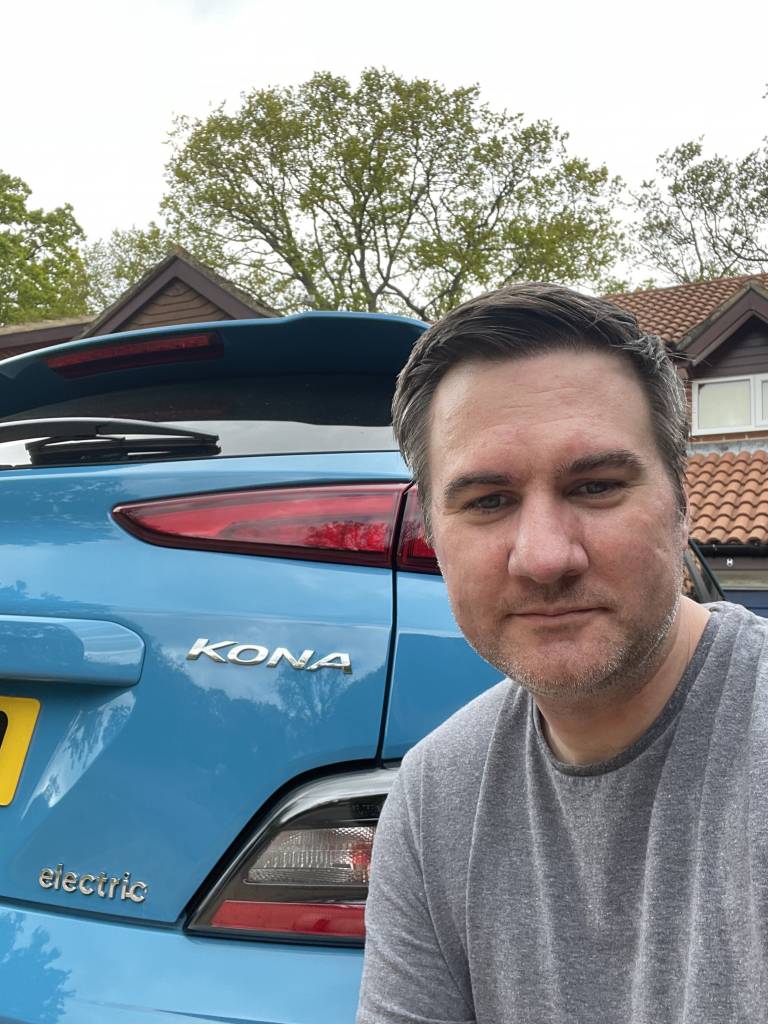 Members of the PALS Green Impact Team have made lifestyle changes to help the planet. Read this interview with Dave Hetherington (PALS IT Manager) who decided to shift to an electric car and you can also read about Dave's switch from incandescent bulbs to LED bulbs. 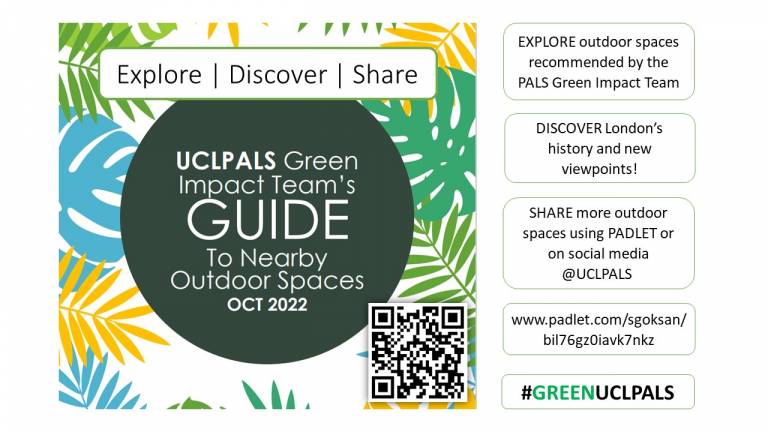 Check out the Green Impact Team's recommended Green spaces around London & add your own spaces to explore as well! 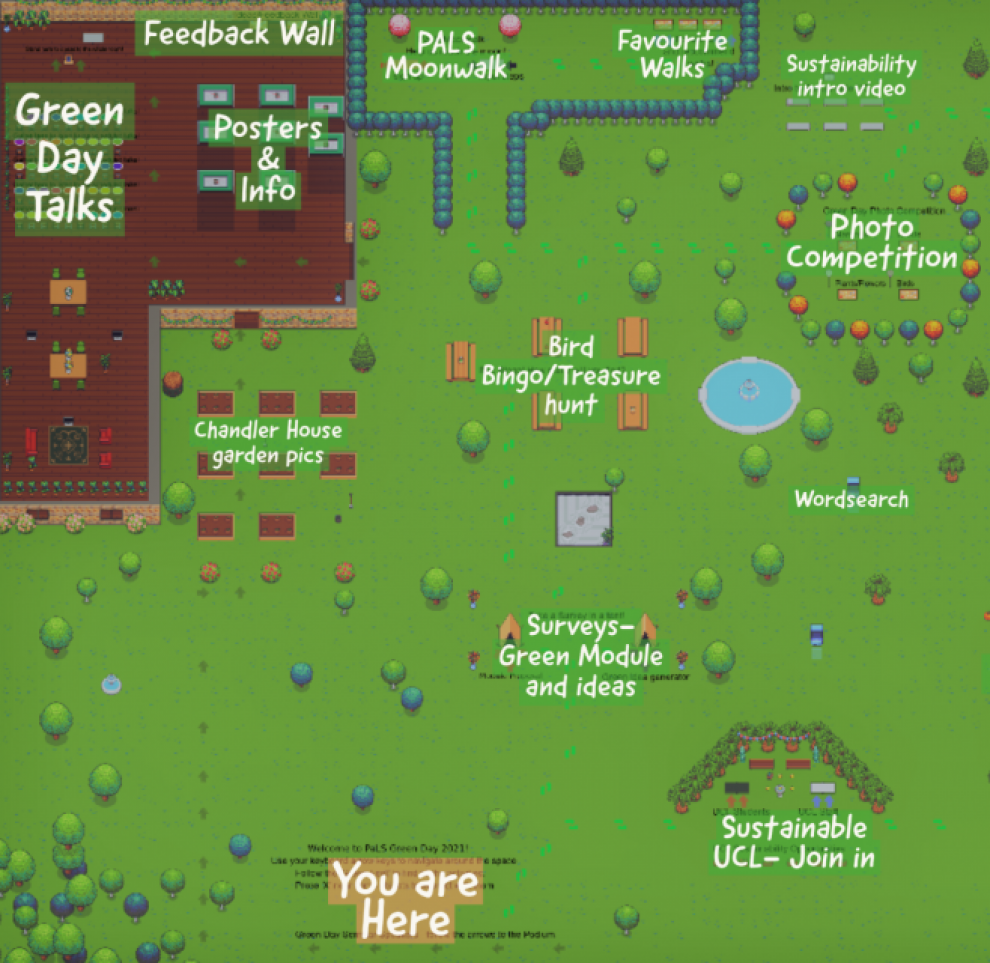 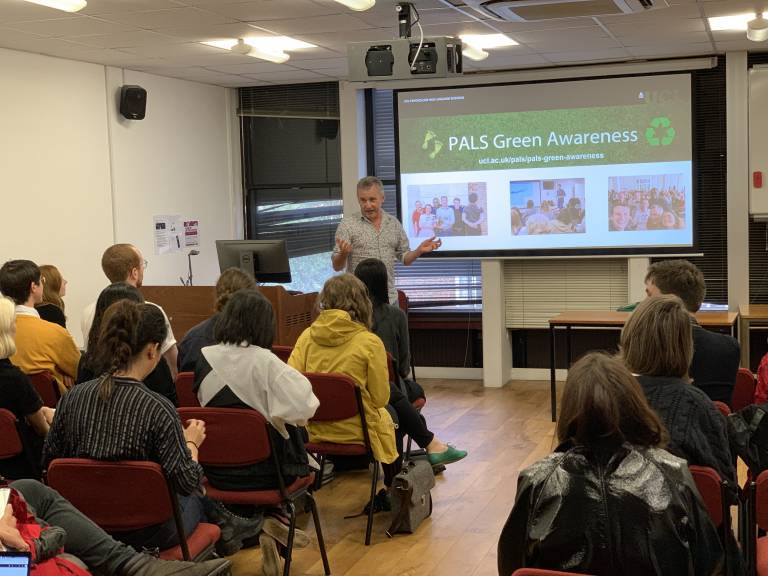 You can take a look at his most recent slides below: 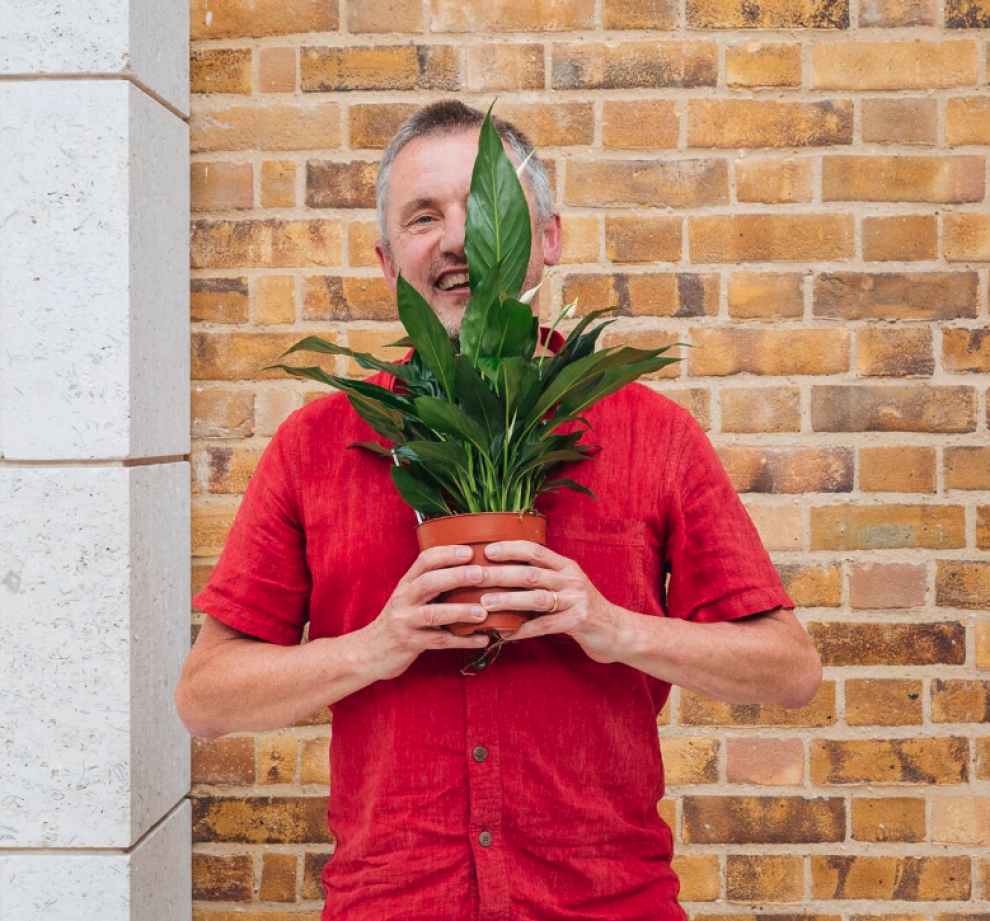 Congratulations to John Draper from PALS for winning the Lifetime Achievement Award for Outstanding Commitment to Sustainability.