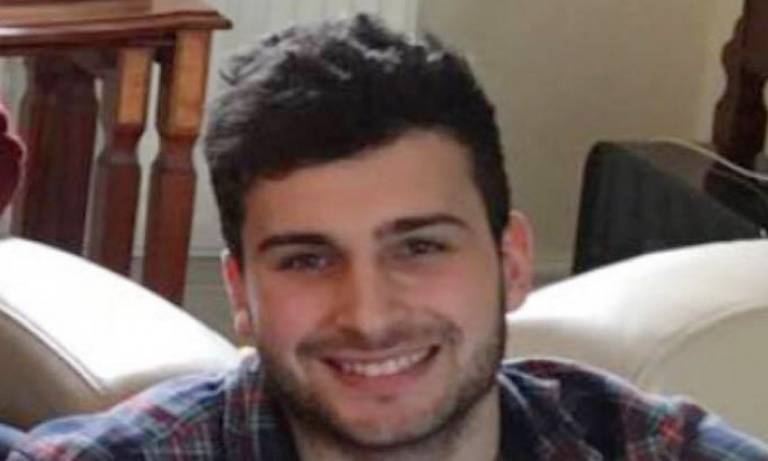 Congratulations to student Alex Dorgham, who has won the prestigious British Neuropsychological Society (BNS) prize for an undergraduate research project.

Alex is currently a fourth-year medical student at UCL. UCL medical students are required to complete an iBSc – an intercalated degree – in their third year of study. Alex spent the last year studying at UCL Institute of Cognitive Neuroscience, supervised by Professor Patrick Haggard.

Alex’s project focused on voluntary action: the ability to decide for oneself what to do, and to then do it. Voluntary action is a defining feature of the healthy human mind, but it has proved hard to study the process of volition experimentally.  The study measured a gradual build-up of electrical activity in the brain, known as a “readiness potential,” as a means of measuring volition in the human brain.

When undertaking the experiment a second time, volunteers were only allowed to make half as many voluntary ‘skip’ actions as previously. This effectively “rationed” their free will, making them less habitual and more deliberate in their actions. Alex found a more marked drop in the variability of pre-movement potentials, in the session where volition was rationed, compared to the first session, where it participants could make as many voluntary actions as they wished.

Alex thus concluded that thinking more deliberately about making a voluntary action produced a more consistent, stable process of brain activity prior to action.  His results suggest that volition involves a specific mental process that can be measured in the human brain over 1 second prior to action.  This seems inconsistent with recent views suggesting that voluntary actions are the result of neural noise.

Commenting on his award, Alex said, “It has been fascinating exploring the neural processes underlying human free will. Whilst I have learnt a lot from the experience, I feel like I have finished the project asking far more questions about the area than when I initially embarked on the topic a year ago. I am looking forward to see how upcoming research steers the debate.”

Alex will receive his prize at the autumn meeting of the BNS on November 2nd 2017.