Satellites can now measure the thickness of Arctic sea ice in the summer months for the first time, thanks to a new study involving UCL researchers. 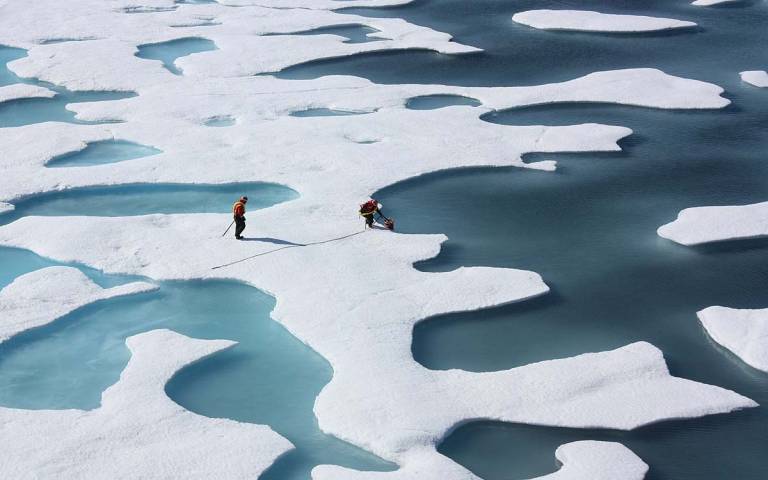 Until now, satellites could only measure sea ice thickness between October and March, when the ice and snow are cold and dry. In the warmer months, melt ponds on top of the ice floes confused the instruments, which could not be used to distinguish between melted ice on an ice floe and the ocean.

In the new study, published in the journal Nature, researchers used an artificial intelligence technique to correct this problem, in which an algorithm was trained on thousands of simulations of satellite data to reliably distinguish between melt ponds and the ocean.

The team have now developed the first dataset showing the thickness of sea ice across the entire Arctic and through a whole year. The dataset represents a key step forwards for measuring sea ice thickness via satellite, an endeavour led by researchers at UCL over several decades.

Dr Michel Tsamados (UCL Earth Sciences), a co-author of the study, said: “The thickness of Arctic sea ice is a critically important measure, for the health of the Arctic, for our future climate, and for life on Earth. Summer is an important period as that is when all the melting and rapid changes occur – roughly 75% of the volume of Arctic sea ice has been lost over recent decades.

“When this new data is used in advanced climate models, it will improve both our short-term forecasts for the weather at mid-latitudes, as the total amount of frozen ocean in the Arctic is also a critical control of our weather, and the long-term forecasts that show what climate we will have in the future.”

Co-author Professor Julienne Stroeve (UCL Earth Sciences) added: “This paper is a first step towards being able to monitor sea ice thickness year-round, a key need if we want to be able to improve sea ice predictability on seasonal to decadal time-scales.”

Better measurements and predictions of sea ice thickness are also important for shipping in the region. The new data will "will reduce safety risks for ships and fishing boats”, according to lead author Jack Landy, of UiT The Arctic University of Norway. “We can also predict whether there will be ice or not at a given location in September, by measuring the ice thickness in May.”

To calculate sea ice thickness, scientists use a technique called radar altimetry. The satellite sends a radar wave to the Earth’s surface; by timing how long it takes for the radar to bounce back from the ice, and comparing this to the bounce-back time from the ocean, scientists can calculate the height of the ice above the water, from which they can infer the ice’s total thickness.

Measuring sea ice thickness via satellites orbiting hundreds of kilometres above the Earth’s surface has been a long journey started and led by researchers at UCL. Professor Sir Duncan Wingham (UCL Earth Sciences) first proposed and was the lead investigator for the European Space Agency’s Cryosat mission (now Cryosat-2), which has been measuring sea ice thickness in winter since 2010. Many other researchers at UCL have worked over the years to perfect the techniques used.

Dr Michel Tsamados will be discussing the new Nature paper as part of a London Polar Group event at UCL at 17:30 on Friday 23 September. Other speakers at the event will be Professor Julienne Stroeve, Dr Emma Liu (UCL Earth Sciences), and Georges Tombs, director of a new documentary about polar explorer Roald Amundsen.