Writing in The Conversation, Dr Bob Morris (UCL Constitution Unit) explores how the new King's relationship with faith may differ from his mother, with him likely approaching his role as "defender of the faith" more inclusively, reflecting the diversity of religion in Britain. 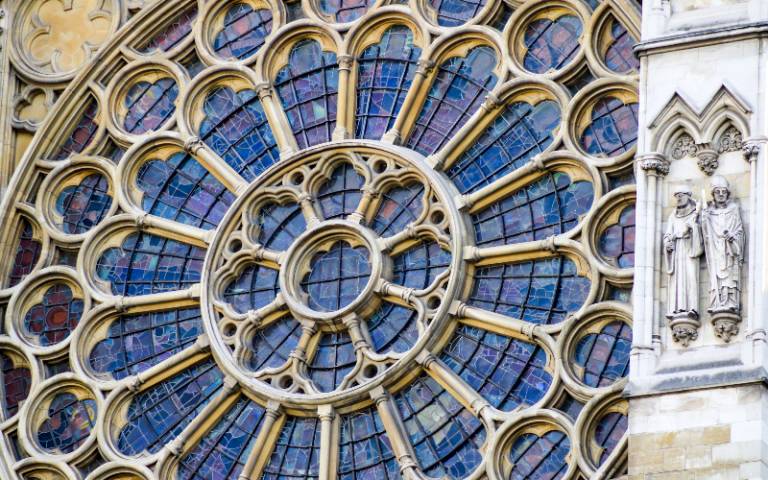 When Queen Elizabeth II ascended the throne in 1953, she took on the role of “defender of the faith” (Fidei Defensor in the original Latin) – a title first granted to Henry VIII by the Pope in 1521. He subsequently broke with Rome and became the first head of the Church of England.

In the past 70 years, the role of religion in British public life has evolved significantly. As King Charles III assumes the role of monarch, his relationship with faith will also come into focus, and may look different from his mother’s.

At a memorial service for the Queen in Belfast cathedral, the new king took care on his arrival to meet representatives of all religious groups in the province. It is expected that there will be a full, similar presence of religious representatives at his forthcoming coronation. Although the Archbishop of Canterbury and Anglican clergy will remain the principal celebrants, other Christian denominations and non-Christian religions are expected to have a place in the ceremony.

The monarchy has responded to these changes in two ways. First, as Prince of Wales in the 1990s, the now-King mused aloud whether the monarchical title defender of the faith should not be reinterpreted as “defender of faith”. This is understood to have been his reaction to the growing presence of non-Christian religions in the UK, as well as signalling a more relaxed and inclusive attitude towards non-Anglican Christians.

Second, at a Lambeth Palace ecumenical meeting hosted by the Archbishop of Canterbury in February 2012, the Queen, speaking as supreme governor of the Church of England in her diamond jubilee year, said:

"The concept of our established Church is occasionally misunderstood and, I believe, commonly under-appreciated. Its role is not to defend Anglicanism to the exclusion of other religions. Instead, the Church has a duty to protect the free practice of all faiths in this country."

In practice, this was thought to confer a role on the Church of England distinct from its previous concern to defend its exclusivity. At the same time, it was welcome to many of the members of non-Christian religions whose presence had grown in the post-war period, and also accepted by the Anglican hierarchy, which seems to have encouraged the Queen to take the initiative.

And at a recent meeting with faith leaders, the King remarked that, as monarch, he intends to protect the diversity of religion in Britain, and to “respect those who follow other spiritual paths, as well as those who seek to live their lives in accordance with secular ideals”.

The King’s constitutional links with the Christian churches derive from the 16th century Protestant reformations, which took different forms in England and Scotland (then separate countries). Towards the end of the 17th century, when threatened by Catholic states, legislation banned Roman Catholics, or (until 2013) anyone married to one, from succeeding to the throne.

Roman Catholics and all Protestant groups not belonging to the Anglican Church of England or the Church of Scotland were deprived of most of their civic freedoms. These were finally restored, after some earlier relaxations, in the late 1820s – and last of all for the Roman Catholics in 1829.

The present position is that a British king cannot be a Roman Catholic, must be “in communion with” the Church of England, and swear that he is a faithful Protestant. Following the 1707 Act of Union between Scotland and England, he must, after accession, swear to “inviolably maintain and preserve” the Presbyterian form of church government established in the more autonomous Church of Scotland. This was one of Charles III’s first acts as king.

The King’s coronation consists of a service of Holy Communion, and a rite during which he is anointed and crowned by the Archbishop of Canterbury, primate of the Church of England. In coronation oaths prescribed by parliament in 1689, the King will swear, among other things, to “maintain and preserve inviolately” the establishment of the Church of England and the rights and privileges of its clergy.

In Scotland, the greater autonomy of the Church of Scotland means the King has no similar relationship. However, he will appoint a Lord High Commissioner every year to attend and observe the proceedings of the Church’s annual General Assembly, and will occasionally attend himself in the same capacity. At the coronation in 1953, that year’s moderator (clerical chairman) of the Church of Scotland was the sole non-Anglican present among the officiating clergy.

The new King’s coronation is still some months’ away, but the changing face of religion in the United Kingdom, combined with his and his mother’s past comments, suggest that the title Fidei Defensor will be interpreted in more inclusive and positive ways.

He has said as much himself in his recent comments to faith leaders after ascending the throne:

"The beliefs that flourish in, and contribute to, our richly diverse society differ. They, and our society, can only thrive through a clear collective commitment to those vital principles of freedom of conscience, generosity of spirit and care for others which are, to me, the essence of our nationhood. I am determined, as King, to preserve and promote those principles across all communities, and for all beliefs, with all my heart."

This was published in The Conversation on 21 September 2022.