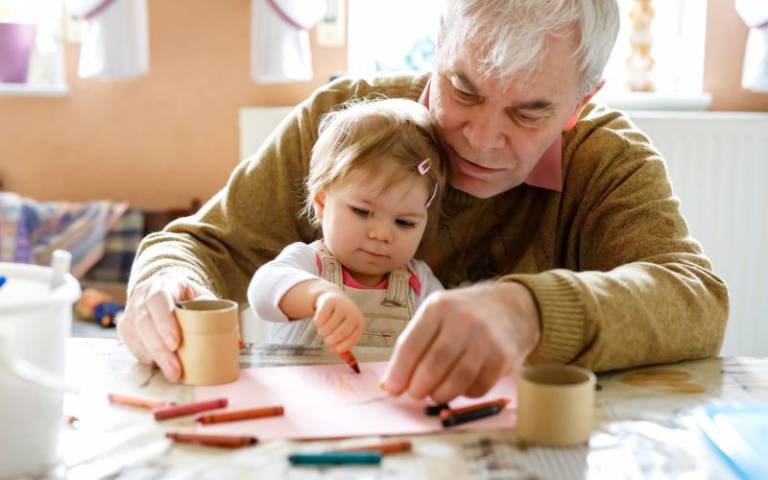 The study, published in Journal of Gerontology: Social Sciences, also found that grandparents in England who either stopped or reduced the amount of time spent caring for their grandchildren reported lower life satisfaction and quality of life.

Researchers examined data from a sample of 2,468 grandparents over the age of 50 with grandchildren under the age of 15 from the English Longitudinal Study of Ageing (ELSA).

Right before the pandemic outbreak, in February 2020, 52% of grandparents looked after their grandchildren. However, during the first year of the pandemic older people were advised by the government to stay indoors and limit their in-person interactions with others to reduce the risk of catching Covid-19. This included staying away from grandchildren and younger people, with former Health Secretary Matt Hancock using the phrase “don’t kill your gran” in a BBC radio interview.

Perhaps partly as a result, 22% of grandparents reported that their engagement in grandchild care was mostly reduced compared to pre-pandemic, and around 10% stopped caring for their grandchildren entirely over the first 9 months of the pandemic.

In November and December 2020, over a third (34.3%) of grandparents who stopped looking after their grandchildren throughout the first 9 months of the pandemic reported high levels of depressive symptoms, such as feeling sad or having restless sleep, compared to 26% of those who continued to look after grandchildren. They also reported lower life satisfaction, and a lower quality of life.

The researchers were able to account for pre-pandemic mental and physical health, socioeconomic and demographic characteristics, as well as social contacts with family and friends and loneliness during the pandemic to better understand if the relationships observed between reduction in grandchild care provision and poorer mental health were driven by pre-existing conditions or socioeconomic adversity.

Lead author Dr Giorgio Di Gessa (UCL Institute of Epidemiology & Health Care) said: “Grandparents who were unable to see and spend time with their grandchildren for reasons beyond their control might have been frustrated and distressed about it, leading to negative consequences for their mental health.

“Looking after grandchildren may provide grandparents with emotional gratification and a sense of usefulness and competence, thereby enhancing life satisfaction. Grandparents’ involvement in such a family activity may also provide them with a sense of value and attachment, thereby strengthening intergenerational relationships and positive emotional exchanges that might benefit their mental health”.

Co-author Dr Bruno Arpino (University of Florence) said: “We know from previous studies that the pandemic and policies restricting human interaction have posed a greater risk to mental health and well-being. Few studies, however, have so far looked at grandparents despite their vital role in family life and the potential health benefits for grandparents to look after grandchildren”.

Co-author Dr Valeria Bordone (University of Vienna) added: “If physical distancing policies remain a core strategy to protect individuals at higher risk from Covid-19 variants or indeed in a future pandemic, attention should be paid to addressing the mental health and wider needs of older people who may suffer from the loss of meaningful roles in their family and society.”

ELSA does not record detailed information about the kind of childcare grandparents provide, instead it asks generic questions linked to the amount of time spent looking after grandchildren. It also does not collect information on parents’ employment or other childcare arrangements.

ELSA also did not collect information about respondents’ ability to cope with uncertainty due to Covid-19 or personality characteristics that may leave them vulnerable to higher levels of depression in uncertain times and might have influenced their choices of grandparental childcare provision during the pandemic.

This study only considers data from one wave of the pandemic.