Scientists have discovered that cervical cancer can be divided into two distinct molecular subgroups – one far more aggressive than the other – as part of the largest ‘omics’ study of its kind, led by researchers at UCL and the University of Southampton. 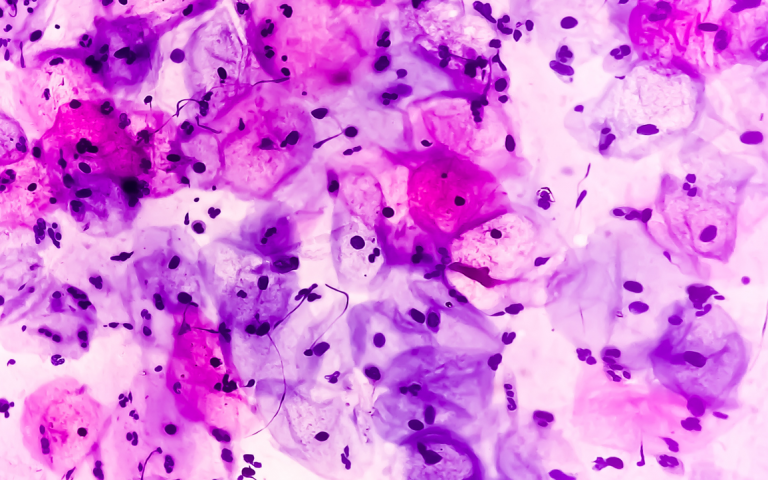 Published in Nature Communications, researchers say the breakthrough findings are a ‘major step forward’ in understanding disease and provide a tantalising new clue in determining the best treatments for individual patients.

Cervical cancer is a major cause of cancer-related deaths in women and accounts for 528,000 new cases and 266,000 deaths worldwide each year. It is almost always caused by the human papillomavirus (HPV), a common virus that can be passed from one person to another during sex.

Even in the UK, where NHS cervical screening has dramatically reduced cancer incidence and with the national HPV vaccination programme aiming to cut rates even further, around 850 women die every year from the disease.

For the study, researchers started by applying a multi-omics* approach, analysing and comparing a combination of different markers, including DNA, RNA, proteins, and metabolites, in 236 cervical squamous cell carcinoma (CSCC) cases, the most common form of cervical cancer, available in a publicly available US database.

This analysis revealed that the US cancers fell into two distinct ‘omics’ sub-groups, which they named C1 and C2.  Further investigation revealed that C1 tumours contained a much higher number of specialised white blood cells, known as cytotoxic T cells, which are known to be potent serial killers of tumour cells. The findings suggested that patients with C1 tumours would have a stronger immune response within the tumour micro-environment.

Scientists then asked the question – do the two sub-types affect patients with cervical cancer in different ways?

By doing this integrated analysis, researchers found that, as in the US cohort, nearly a quarter of patients fell into the C2 subtype and that again, C1 tumours contained far more killer T cells than C2 tumours. Importantly, the data also showed C2 was far more clinically aggressive**, with worse outcomes for patients. This difference in outcomes between patients with C1 and C2 tumours was very similar across the US and European cohorts.

Next, by analysing a further cohort of 94 Ugandan CSCC cases, the team found that C2 tumours were much more common than C1 tumours in patients who were also HIV-positive, underlining the link to a weaker anti-tumour immune response in this group.

Intriguingly, the C1/C2 grouping appeared to be more informative than the type of HPV present. Cervical cancer can be caused by at least 12 different ‘high-risk’ HPV types, and there have been conflicting reports as to whether the HPV type present in a cervical cancer influences the prognosis for the patient. This new study suggested that while certain HPV types were found more commonly in either C1 or C2 tumours, prognosis was linked to the group to which the tumour could be assigned, rather than the HPV type it contained.

Co-corresponding author, Tim Fenton, Associate Professor in Cancer Biology in the School of Cancer Sciences Centre for Cancer Immunology at the University of Southampton, said: “Despite major steps forward in preventing cervical cancer, many women still die from the disease. Our findings suggest that determining whether a patient has a C1 or a C2 cervical cancer could help in planning their treatment, since it appears to provide additional prognostic information beyond that gained from clinical staging (examining the size and degree to which the tumour has spread beyond the cervix at the time of diagnosis).

“Given the differences in the anti-tumour immune response observed in C1 and C2 tumours, this classification might also be useful in predicting which patients are likely to benefit from emerging immunotherapy drugs such as pembrolizumab (Keytruda®, an immunotherapy drug recently approved for use in cervical cancer), but C1/C2 typing will need to be incorporated into clinical trials to test this.”

Co-corresponding author, Kerry Chester, Professor of Molecular Medicine at UCL Cancer Institute, said: “This collaborative multi-disciplinary research is a major step forward in our understanding of cervical cancer. Through careful molecular profiling and genetic analysis of cervical cancer tumours we have gained valuable new insight into the tumour microenvironment and factors potentially making the cancer less aggressive in some patients.

“Inclusion of patient cohorts in Norway and Austria, for which highly detailed clinical information was available to complement the molecular data, were key factors in the success of the study.”

The research was primarily funded by the Debbie Fund, set up in memory of Deborah Phillips, who died of cervical cancer in in 2010, aged 48.

Katy Moyle, Debbie Fund Chairperson, said: "We set up the Debbie Fund to improve the treatment options for women with cervical cancer, and that's exactly what this research is set to do.  We're delighted to have enabled this highly collaborative project, and so impressed by the efforts of all the scientists involved. As always, we're hugely grateful for the ongoing support of our donors, without whom this wouldn't have been possible."

*A Multi-omics analysis aims to identify molecular markers and characteristics associated with biological processes (in this case cervical cancer cells) by analysing DNA, RNA, proteins, metabolites, etc. Omics is a branch of science incorporating multiple disciplines such as genomics, transcriptomics, proteomics, and metabolomics.

** Patients with C2 tumours were more than twice as likely (hazard ratio 2.32) to die from their cervical cancer at any point during the follow-up period (up to 20 years), than those with C1 tumours. In terms of 5-year disease-specific survival, the rates were 79% survival for C1 and 66% survival for C2.