Powerful jets of material released by black holes are accelerated far into space by shock waves within the jets, an international collaboration involving UCL researchers has found. 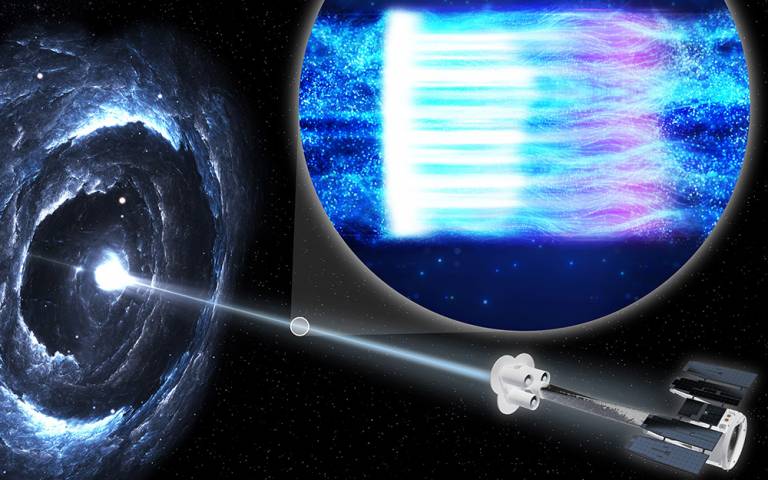 The study, published in Nature, helps to solve a decades-old mystery about how these jets are produced. The research team was able to rule out alternative causes of the jets – such as magnetic reconnection – and, out of a number of theoretical models of how the particles in the jets are accelerated, showed that just one model was correct.

Researchers looked at Markarian 501, a galaxy 456 million light years away, which emits what is known as a blazar – a powerful jet that is especially bright to us because it points towards Earth.

They analysed data from NASA’s Imaging X-Ray Polarimetry Explorer, or IXPE, which launched last December, along with observations from a range of other telescopes in space and on the ground.

The satellite, a collaboration between NASA and the Italian Space Agency, for the first time can measure the polarisation of X-ray light in space – that is, it can measure the average direction and intensity of the electric field of light waves that make up X-rays. This information is not accessible to telescopes on Earth because the atmosphere absorbs X-rays from space.

Co-author Professor Silvia Zane, who is part of the IXPE science team along with Professor Kinwah Wu (both UCL Mullard Space Science Laboratory), explained: “We were able to discard the different models one by one – the model that was left was the simplest. It’s a beautiful example of a symmetrical structure, a textbook example.”

Dr Yannis Liodakis, lead author of the study and astronomer at FINCA, the Finnish Centre for Astronomy with ESO, said: “This is a 40-year-old mystery that we’ve solved. We finally had all of the pieces of the puzzle, and the picture they made was clear.” In addition to data from IXPE, which observed Markarian 501 for three days in early March, and then again two weeks later, the astronomers used other telescopes in space and on the ground to gather information about the blazar in a wide range of wavelengths of light including radio, optical, and X-ray.

While other studies have looked at the polarisation of lower-energy light from blazars in the past, this was the first time scientists could get this perspective on a blazar’s high-energy X-rays, which are emitted closer to the source of particle acceleration.

After comparing their information with theoretical models, the team of astronomers realised that the data most closely matched a scenario in which a shock wave accelerates the jet particles. A shock wave is generated when something moves faster than the speed of sound of the surrounding material, such as when a supersonic jet flies by in our Earth’s atmosphere.

The study was not designed to investigate the origins of shock waves, which are still mysterious. But scientists hypothesize that a disturbance in the flow of the jet causes a section of it to become supersonic. This could result from high-energy particle collisions within the jet, or from abrupt pressure changes at the jet boundary.