Students take on their professors for radio glory

UCL undergraduates went head-to-head with their professors for BBC Radio 4’s The 3rd Degree quiz show, answering questions on their degree subjects and popular culture in a bid to topple their tutors. 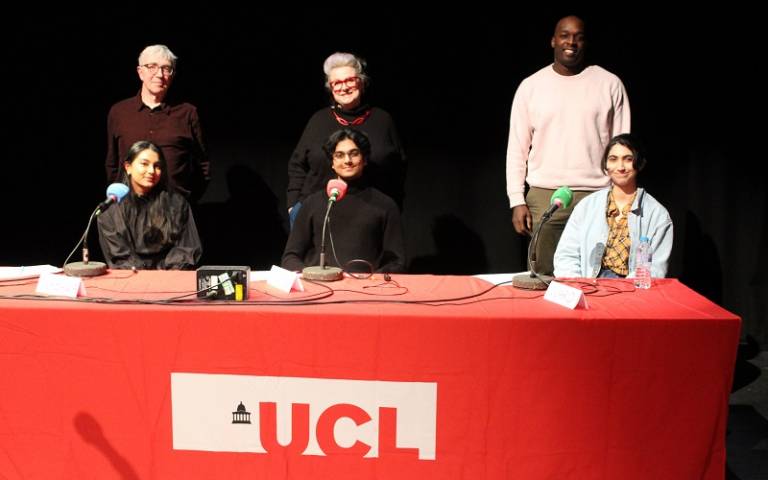 Presented by comedian Steve Punt, the long-running quiz show comprises rounds covering general knowledge, lists, quickfire questions, three specialist subject rounds and the popular highbrow lowbrow round, where contestants have the choice of answering a high or popular culture question based on a given clue.

General knowledge questions included the number of square inches in a square yard and the British equivalent of the American term ‘walla’, used in television and radio to refer to simulated crowd noise.

Specialist subject questions introduced the audience to the use of zirconium dioxide and the Dodo Bird Verdict, a concept used in psychology.

And popular culture, or ‘lowbrow’ questions included the unusual feature on actor Megan Fox’s engagement ring and the name of the Serbian tennis star deported from Australia earlier this year.

After a closely fought and good-humoured contest it was the academic team, known as ‘the Dons’, who prevailed with a score of 29 to 15.

The show was recorded in front of a live audience at UCL’s Bloomsbury Theatre in February and aired on BBC Radio 4 today (Monday 20th June).

Dr Michael Sulu said of the experience: “The show was a lot of fun to take part in, particularly forming a diverse team with staff from other departments. I went first during the subject round which certainly put the pressure on, especially as any wrong answers given might have helped Nvard to work out the correct answer.

“The quickfire round at the end really highlighted the competitive ones amongst us, but the whole quiz was conducted in good spirits. The Dons, students and producers worked together to make what I hope was a fun show to listen to.”

Professor John Mullan wowed the teams and audience during the quickfire round with his knowledge of Scottish geography and famous makes of pianos, helping to widen the gap between the Dons and student scores.

He commented: “The students had all of their synapses still firing, while I know that past age 40 the memory becomes a traitor. How could I have recalled so few of Europe’s main container ports? It’s worse when the question is in your own subject area – how could I have failed to have come up with the name of the Scottish poet who also plays jazz music? Especially when I have actually met him. That all said, The 3rd Degree was first class and I would do it again in a heartbeat.”

The UCL episode of The 3rd Degree is available on BBC Sounds and is the first quiz in Series 12.