Using sound to levitate something when there are other objects in the way has been shown for the first time by UCL researchers and could lead to advances in the manufacturing and entertainment sectors. 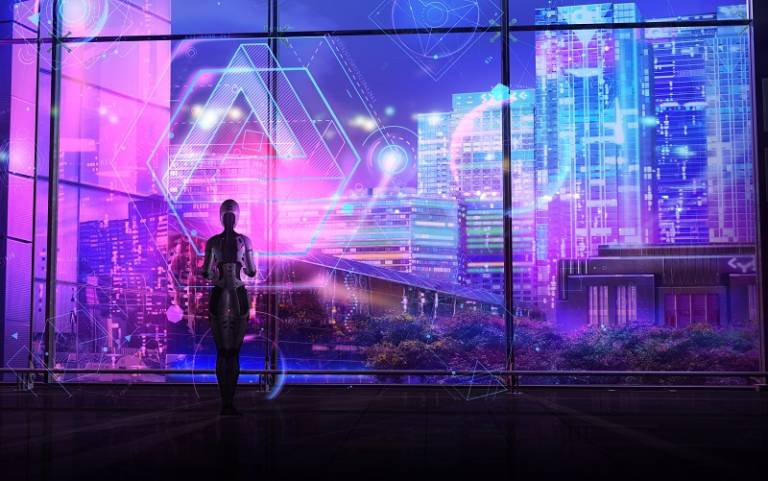 The findings open up possibilities for more advanced interactive entertainment through virtual reality and mixed reality at theme parks, arcades and museums. Technology using 3D levitation could lead the way to fully immersive real-world simulations without the need for clunky headsets or goggles.

The technique could also improve 3D printing by allowing manufacturers to build more sophisticated, multi-material objects as opposed to the layer-by-layer, single material build approach that is currently used.

Previous research has already shown that levitation using soundwaves is possible. Objects can be held and moved in mid-air using the force from high intensity ultrasound waves (which have a frequency higher than humans can hear) to hold something in place, known as acoustic levitation. This technique also makes it possible to create interactive 3D images, such as holograms, in mid-air that you can see, feel and hear.

However, until now, this could only be done in an empty space; anything in the way of the soundwave would cause the levitated objects to fall.

For the paper, published in Science Advances, the research team has gone one step further by showing how acoustic levitation is possible outside of such a controlled environment, and can be achieved with objects nearby, such as walls, a car dashboard or other common appliances.

Co-author Dr Diego Martinez Plasencia (UCL Computer Science) said: “In the past, our 3D displays had to exist in a vacuum, but now we can create 3D content right there in front of you. No eye-wear or tricks required, simply 3D shapes sharing the very space in which we live.”

Lead author Dr Ryuji Hirayama (UCL Computer Science) said: “Until now, we’ve only been able to demonstrate acoustic levitation for virtual reality and holograms in controlled environments without any other objects nearby that could interrupt and scatter soundwaves. In this paper, we’ve shown how we can float objects and even create digital content such as holograms in real-world environments by accounting for nearby objects in real-time. It opens up the possibilities for fully immersive virtual reality experiences and interactive holograms.”

The team levitated different objects including polystyrene beads, water and fabric, by combining two new steps. Firstly, they computed how the soundwave's path looked at any time when different speakers are turned on, and how they bounce off objects in the environment.

The second step involved working out a fast technique to turn the speakers quickly off or on so that after the soundwave had scattered, the environment was able to hold the object in air.

This technique could modernise how products are designed and built through multi-material 3D printers. Current printers use one dispenser to release each material in the object. This is particularly important to avoid material cross-contamination when chemicals or biological materials are used.

Acoustic levitation would enable numerous materials to be used without cross-contamination or moving the dispenser inside the fabrication space (contactless fabrication). The technique makes building the object more flexible, as material can be added from any direction, avoiding layer-by-layer fabrication and allowing for more sophisticated multi-material objects to be produced.

Lead researcher Sri Subramanian (UCL Computer Science) said: “I am excited for how this work opens the door for mixing many different materials in additive manufacturing and 3D printing. Acoustic levitation has huge potential in precision manufacturing and this work paves the way for realising this opportunity.”

The work was supported by the European Research Council and the Royal Academy of Engineering Chairs in Emerging Technology Scheme.