A single gene therapy injection could dramatically reduce the bleeding risk faced by people with haemophilia B, finds a study involving UCL researchers. 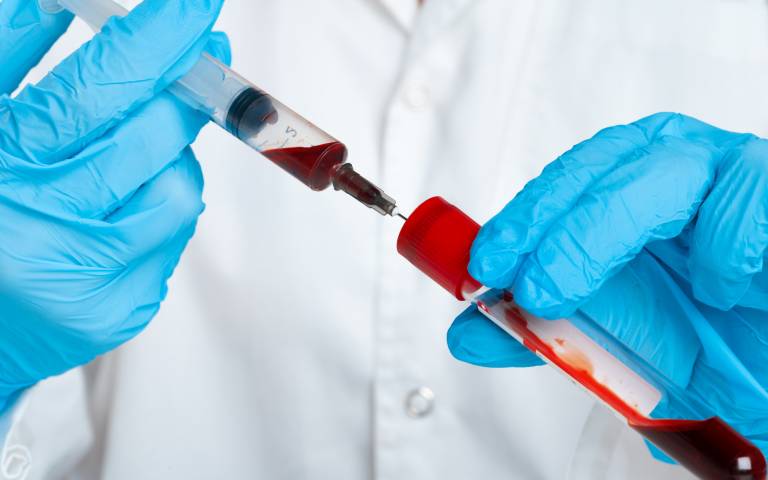 For the paper, published in the New England Journal of Medicine, experts from UCL, Royal Free Hospital and biotechnology company Freeline Therapeutics trialled and continue to evaluate a new type of adeno-associated virus (AAV) gene therapy candidate, called FLT180a, to treat severe and moderately severe cases of the condition.

Haemophilia B is a rare and inherited genetic bleeding disorder caused by low levels of the factor IX (FIX) protein, needed for forming blood clots that help prevent or stop bleeding. The gene responsible for making FIX protein is located on the X chromosome, so the severe form of haemophilia B is much more common in men.

The Phase I/II multi-centre clinical trial, called B-AMAZE, and the related long-term follow up study found that one-time treatment with FLT180a led to sustained production of FIX protein from the liver in nine of ten patients, across four different dose levels, removing the need for regular replacement therapy.

Out of 17 male patients aged 18 or over who underwent screening, ten with severe or moderately severe haemophilia B took part in the 26-week trial of FLT180a. They are also all enrolled in the long-term follow up study to assess safety and durability of FIX expression for 15 years.

Lead author Professor Pratima Chowdary (Royal Free Hospital, UCL Cancer Institute) said: “Removing the need for haemophilia patients to regularly inject themselves with the missing protein is an important step in improving their quality of life. The long term follow up study will monitor the patients for durability of expression and surveillance for late effects.”

AAV gene therapy works by using a packaging from the proteins found in the outer coat of the virus, to deliver a functional copy of a gene directly to patient tissues to compensate for one that is not working properly. Newly synthesised proteins are released into the blood and a one-time infusion can achieve long-lasting effects.

Patients needed to take immune suppressing drugs over several weeks to several months, to prevent their immune systems from rejecting the therapy, and all reported known side effects.

While the treatment was generally well tolerated, all patients experienced some form of adverse events, with an abnormal blood clot in one who received the highest FLT180a dose and had the highest levels of FIX protein.

“The B-AMAZE long-term data add to the growing body of evidence that gene therapy has the potential to free patients from the challenges of having to adhere to lifelong therapy or could provide treatment where none exists today.”

In nine out of the ten patients, the treatment led to a sustained increase in FIX protein production, which led to a decrease in excessive bleeding. They also no longer required weekly injections of FIX protein.

After 26 weeks, five patients had normal levels of FIX protein, three had low but increased levels, and one patient treated at the highest dose had an abnormally high level.

Pamela Foulds, MD, Chief Medical Officer of Freeline, said: “The B-AMAZE long-term data continue to support our confidence that a single dose of FLT180a could protect people with haemophilia B from bleeding and the need for lifelong FIX replacement through durable expression of FIX at protective levels.”

In June 2022 UCL received £6.5m government funding to continue translating research into global impact - the second highest amount given to organisations across the country.

Professor Geraint Rees (UCL Vice-Provost Research, Innovation and Global Engagement, and Non-Executive Director of UCL Business), said: “The results of this important study are a perfect example of how UCL research and innovation can translate to real-world and life-changing impact.”

The Phase I/II trial was sponsored by UCL and funded by Freeline Therapeutics.