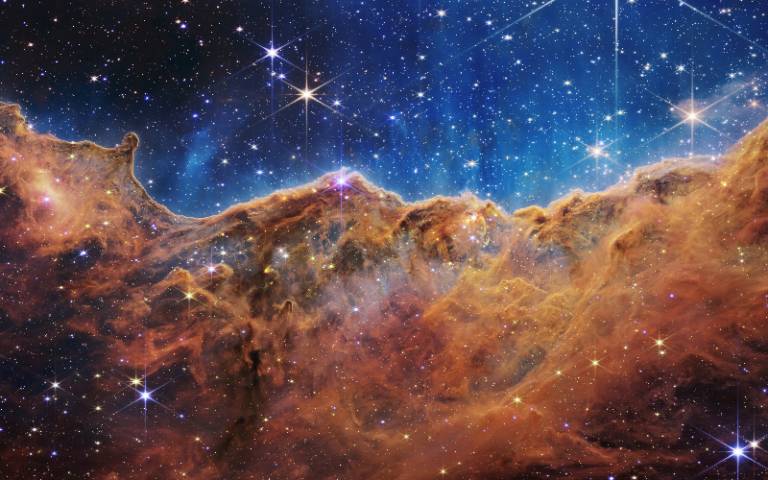 At a special preview event at the White House on 11 July, President Joe Biden unveiled the first full-colour, scientific images taken by the James Webb Space Telescope. The infrared image shows galaxy cluster SMACS 0723 located about 4.6 billion lightyears away, with even more distant galaxies visible in the background.

At a press conference the following day, NASA released additional images of the Carina Nebula, The Southern Ring Nebula, Stephen’s Quintet galaxy cluster and spectrographic data of the planet WASP-96 b. The spectrographic data released on Tuesday was collected by an instrument known as the Near Infrared Imager and Slitless Spectrograph (NIRISS).

Also onboard the JWST is another spectrometer in part designed and developed at UCL, the Near InfraRed Spectrograph (NIRSpec), which finished commissioning on 7 July and will be collecting scientific data soon. Spectroscopy is a technique that analyses the wavelengths of light a distant object emits to determine its characteristics.

After contributing for several years in the development of NIRSpec itself, researchers at UCL’s Mullard Space Science Laboratory designed and built a key piece of its calibration equipment. NIRSpec will be used to reveal a distant object’s temperature, mass and chemical composition, as well as its distance from us and, in many cases, age. The UCL-built component, called the Calibration Source, consists of 11 mini-telescopes projecting light into a sphere, the output of which produces an even illumination of the NIRSpec detectors.

Prof Mark Cropper (UCL-MSSL) said: “These stunning images and spectra are the gateway to new vistas in the Universe that Webb will explore. UCL contributed in many ways over 13 years to the concept and development of Webb’s workhorse spectrograph NIRSpec, so we can be immensely proud of the flood of fundamental scientific knowledge that this engagement will deliver over the coming years. This is another fine example of UCL operating at and beyond the cutting edge.”

The infrared telescope represents the next generation of space observation. The venerable Hubble Space Telescope observed the universe in the visible light spectrum, the same wavelengths that the human eye can see. The James Webb Space Telescope is tuned to observe in the infrared spectrum, longer wavelengths than the visible spectrum. This means that it can peer even deeper into the far away, ancient universe. In addition, infrared will allow it to capture images of closer celestial objects that would be impossible for Hubble, as infrared light can pass through dust clouds in ways that often visible light can’t.

Professor Richard Ellis (UCL Physics & Astronomy), who was the only Europe-based member of the 1995 “HST and beyond” strategic committee that proposed what would later be known as the James Webb Space Telescope, said: “The combination of JWST’s larger mirror plus the sensitivity of its infrared science instruments represent a considerable advance in performance over both the Hubble and Spitzer Space Telescopes that have so far pioneered the exploration of the early universe. I’m now really excited as this dramatic progress augurs well for reaching the ultimate prize for many astronomers like myself: pinpointing ‘Cosmic Dawn’ -  the moment when the universe was first bathed in starlight.”

Already astronomers around the world are planning observation targets to take advantage of the telescope’s unique capabilities. At UCL, astronomers Professor Michael Barlow and Dr Aayush Saxena, will be analysing the first cycles of observations from James Webb to probe the evolution of the first stars, galaxies, black holes and supernovae.

Dr Aayush Saxena (UCL Physics & Astronomy) said: “To be able to achieve such sensitivity and resolution at infrared wavelengths is truly paradigm shifting, opening up a whole range of possibilities. These capabilities will be revolutionary to detect some of the first galaxies to have formed in the Universe, since the ultraviolet or optical light from extremely distant objects is ‘redshifted’ into the infrared regime. Thanks to the lensing effects of galaxy clusters as we saw in the image, it is further possible to detect even fainter objects in the distant Universe that are being magnified by the cluster. Overall, this was an amazing teaser of JWST’s revolutionary capabilities.”

Professor Mike Barlow (UCL Physics & Astronomy) said: “JWST's extended infrared wavelength coverage encompasses key emission bands from many different molecules and dust particles, which are ultimately the building blocks of planets and of life itself as new stars are formed. I'm particularly excited by the prospect of JWST studying with unprecedented sensitivity the formation of molecules and dust by stars during the final stages of their lives. We plan to study with JWST the archetypal Supernova 1987A in the nearby Large Magellanic Cloud galaxy in order to study the molecules and dust formed in its rapidly outflowing ejected material and to perhaps detect for the first time a remnant neutron star buried deep inside it.” 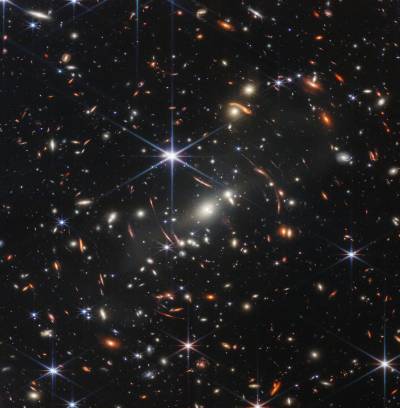 The first released image, known as Webb’s First Deep Field, is the deepest and sharpest infrared image ever taken of the ancient universe, resolving faint never-before-seen galaxies and structures. Thousands of galaxies are visible in the image which spans a spot of the sky about the size of a grain of sand held at arm’s length. Several distant galaxies appear warped and distorted because of the gravitational lensing effect from the mass of nearer galaxies. The farthest objects appear reddish because the expansion of the universe is causing their wavelengths of light to stretch, a process known as redshift.

Dr Francisco Diego (UCL Physics & Astronomy) said: “This first image is really spectacular. The chosen field had been already recorded by the Hubble Space Telescope and the comparison is beyond what was expected. One notes the concentric patterns created by the gravitational distortions (lensing) produced by a nearby, very massive cluster of galaxies, dominated by the large diffuse object at the very centre of the picture. Every arc around this is a distorted background galaxy. The lens effect also makes those distant galaxies much brighter, so they can be detected and examined.”