Shockwaves caused by asteroids colliding with Earth create materials with a range of complex carbon structures, which could be used for advancing future engineering applications, according to an international study led by UCL and Hungarian scientists. 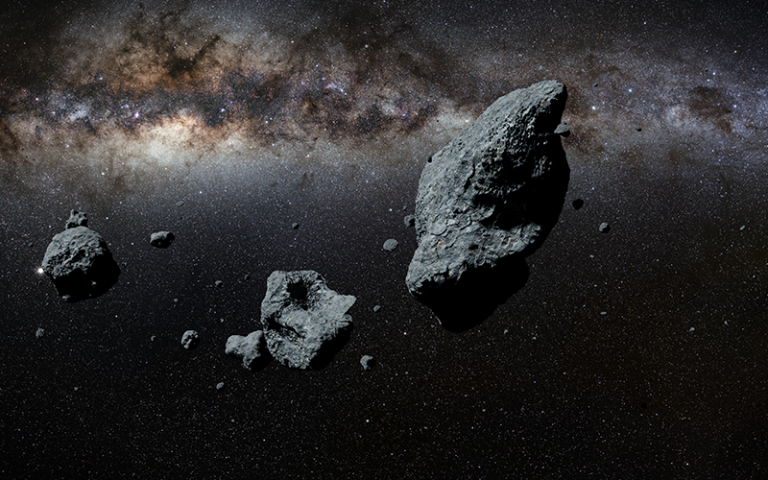 Published today in Proceedings of the National Academy of Sciences, the team of researchers found that diamonds formed during a high-energy shock wave from an asteroid collision around 50,000 years ago have unique and exceptional properties, caused by the short-term high temperatures and extreme pressure.

The researchers say that these structures can be targeted for advanced mechanical and electronic applications, giving us the ability to design materials that are not only ultra-hard but also malleable with tunable electronic properties.

For the study, scientists from the UK, US, Hungary, Italy and France used detailed state-of-the-art crystallographic and spectroscopic examinations of the mineral lonsdaleite from the Canyon Diablo iron meteorite first found in 1891 in the Arizona desert.

Named after the pioneering British crystallographer Professor Dame Kathleen Lonsdale, the first female professor at UCL, lonsdaleite was previously thought to consist of pure hexagonal diamond, distinguishing it from the classic cubic diamond. However, the team found that it is in fact comprised of nanostructured diamond and graphene-like intergrowths (where two minerals in a crystal grow together) called diaphites. The team also identified stacking faults, or “errors” in the sequences of the repeating patterns of layers of atoms.

Lead author Dr Péter Németh (Institute for Geological and Geochemical Research, RCAES) said: “Through the recognition of the various intergrowth types between graphene and diamond structures, we can get closer to understanding the pressure-temperature conditions that occur during asteroid impacts.”

The team found that the distance between the graphene layers is unusual due to the unique environments of carbon atoms occurring at the interface between diamond and graphene. They also demonstrated that the diaphite structure is responsible for a previously unexplained spectroscopic feature.

Study co-author Professor Chris Howard (UCL Physics & Astronomy) said: “This is very exciting since we can now detect diaphite structures in diamond using a simple spectroscopic technique without the need for expensive and laborious electron microscopy.”

According to the scientists, the structural units and the complexity reported in the lonsdaleite samples can occur in a wide range of other carbonaceous materials produced by shock and static compression or by deposition from the vapour phase.

Study co-author Professor Christoph Salzmann (UCL Chemistry) said: “Through the controlled layer growth of structures, it should be possible to design materials that are both ultra-hard and also ductile, as well as have adjustable electronic properties from a conductor to an insulator.

"The discovery has therefore opened the door to new carbon materials with exciting mechanical and electronic properties that may result in new applications ranging from abrasives and electronics to nanomedicine and laser technology.”

As well as drawing attention to the exceptional mechanical and electronic properties of the reported carbon structures, the scientists also challenge the current simplistic structural view of the mineral denoted as lonsdaleite.

The researchers are also grateful to the late co-author Professor Paul McMillan, who was the Sir William Ramsay Chair of Chemistry at UCL, for bringing the team together, his tireless enthusiasm for this work and his lasting contributions to the field of diamond research.