For the second time in its mission so far, the Sun-observing spacecraft Solar Orbiter has flown through the tail of a comet, generating a wealth of science data – helped by an early prediction of the event by a UCL PhD researcher. 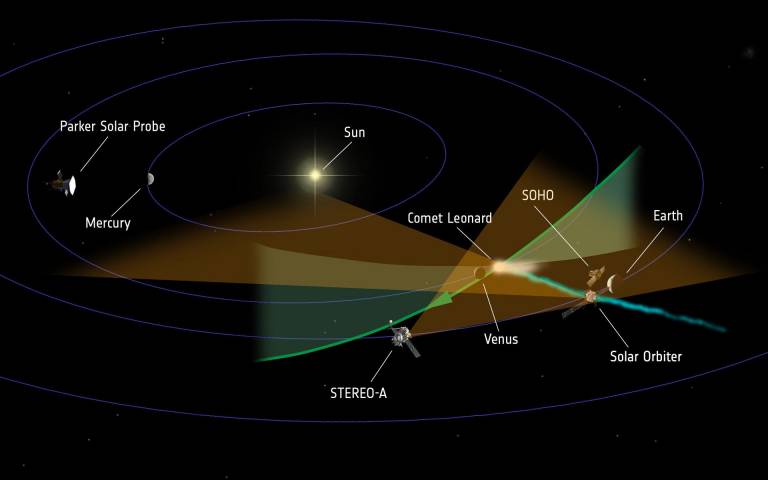 For several days in mid-December, the European Space Agency (ESA) spacecraft – which carries instruments designed and built at UCL – found itself flying through the ion tail of Comet C/2021 A1 Leonard, analysing particles from the comet and the way its tail interacted with the solar wind.

The crossing had been predicted by Samuel Grant, a research student at the Mullard Space Science Laboratory at UCL. He adapted an existing computer program, developed by Professor Geraint Jones (UCL Mullard Space Science Laboratory), that compared spacecraft orbits with comet orbits to include the effects of the solar wind and its ability to shape a comet’s tail. (Both researchers are also affiliated with the Centre for Planetary Sciences at UCL/Birkbeck.)

Grant said: “I ran it with Comet Leonard and Solar Orbiter with a few guesses for the speed of the solar wind. And that's when I saw that even for quite a wide range of solar wind speeds it seemed like there would be a crossing.”

Comet Leonard was first spotted in the outer solar system in January last year. Speeding close by Earth, Venus and the sun over December and January, it has now hurtled away from the solar system into interstellar space.

At the time of the crossing, Solar Orbiter was relatively close to Earth, in a gravity assisted maneouvre ahead of its return to the Sun. The comet's nucleus was 44.5 million kilometres away, near to the planet Venus, but its giant ion tail stretched across space to Earth’s orbit and beyond.

So far, the best detection of the comet’s tail from Solar Orbiter has come from the Solar Wind Analyser (SWA) instrument suite, led by UCL scientists. Its Heavy Ion Sensor (HIS) clearly measured ions that are attributable to the comet rather than the solar wind.

Ions are atoms or molecules that have been stripped of one or more electron and now carry a net positive electrical charge. SWA-HIS detected ions of oxygen, carbon, molecular nitrogen, and molecules of carbon monoxide, carbon dioxide and possibly water.

Professor Christopher Owen (UCL Mullard Space Science Laboratory), Principal Investigator of SWA, said: “It is very satisfying to see predictions coming out of UCL being validated by the high-quality observations being made by SWA, which in turn are the result of many years of hard work by UCL/MSSL scientists and engineers in conceiving, designing, building and now operating the instrument.” 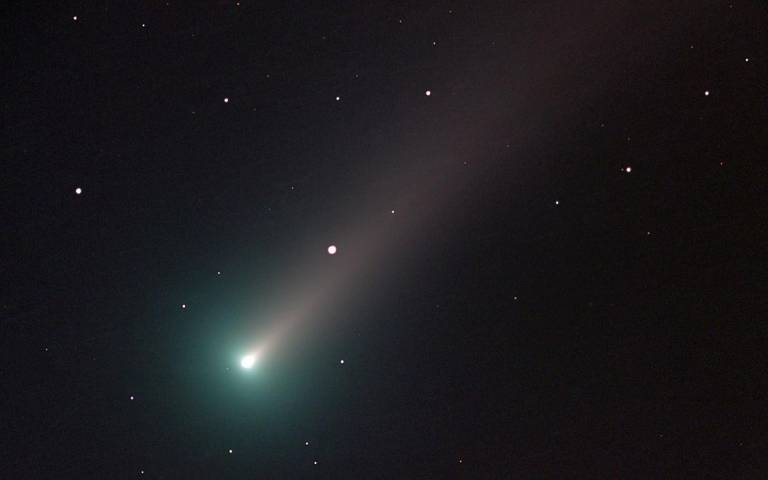 Other instruments on Solar Orbiter captured data on the magnetic field draped around the comet’s tail, as well as images of ultraviolet and visible light.

It was not just Solar Orbiter that was watching the crossing. The ESA/NASA SOHO mission and NASA’s STEREO-A spacecraft were observing from a far. This means that not only do astronomers now have data from inside the tail, they also have contextual images from these other spacecraft.

Comet tail crossings are relatively rare events. Of those that have been detected, most have been noticed only after the event. The ESA/NASA Ulysses mission encountered three comet ion tails.

Solar Orbiter itself crossed the tail of fragmenting comet C/2019 Y4 ATLAS in May and June 2020, shortly after launching.

Whereas the early crossings were a surprise, both of Solar Orbiter’s encounters were predicted in advance thanks to the computer code developed by Professor Jones and extended by Samuel Grant.

“The big advantage is that for basically no effort on the spacecraft’s part, you get to sample a comet at massive distance. That's pretty exciting,” said Grant, who is now looking at archive data from other spacecraft looking for comet tail crossings that have so far gone unnoticed.

The work also helps build experience for ESA’s Comet Interceptor mission, planned for launch in 2029. Professor Jones is the Science Team Lead for the mission, which will visit an as-yet undiscovered comet, making a flyby of the target with three spacecraft to create a 3D profile of a 'dynamically new' object that contains unprocessed material surviving from the dawn of the Solar System.

In the meantime, the instrument teams on Solar Orbiter are busy analysing the Comet Leonard data not only for what it can tell them about the comet but about the solar wind as well.

Daniel Müller, ESA Project Scientist for Solar Orbiter, said: “When the comet ATLAS crossing was predicted, we were still calibrating the spacecraft and its instruments. Also, the comet fragmented just before we got there. But with Comet Leonard we were totally ready – and the comet didn’t fall apart.”

In March, Solar Orbiter makes the first of almost 20 close passes to the Sun that will occur during the next decade. These will result in unprecedented images and data, not only from close up, but also from the Sun’s never-before seen polar regions.

Grant added: “There is so much to look forward to with Solar Orbiter, we’re only just getting started.”

This work was partially supported by a UKRI STFC PhD studentship. Solar Orbiter SWA work at UCL/MSSL is currently funded by STFC.

Solar Orbiter is a space mission of international collaboration between ESA and NASA, operated by ESA. Solar Orbiter Solar Wind Analyser (SWA) data are derived from scientific sensors which have been designed and created and are operated under funding provided in numerous contracts from the UK Space Agency (UKSA), the UK Science and Technology Facilities Council (STFC), the Agenzia Spaziale Italiana (ASI), the Centre National d’Etudes Spatiales (CNES, France), the Centre National de la Recherche Scientifique (CNRS, France), the Czech contribution to the ESA PRODEX programme and NASA.