To commemorate Holocaust Memorial Day 2022, the Centre for Holocaust Education at the IOE (UCL’s Faculty of Education and Society) has launched a new podcast reflecting on one survivor’s experiences and the impact he has had on thousands of people around the world. 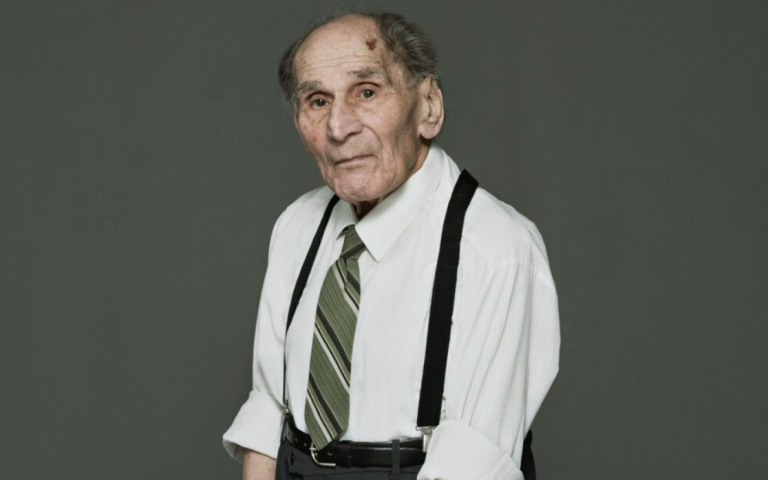 The podcast, Leon Greenman & the struggle for survival, celebrates the legacy of the London-born Auschwitz survivor’s life, work and experiences after the Holocaust.

With an introduction from IOE Director and Dean Professor Li Wei, the podcast is presented by Associate Professor Ruth-Anne Lenga Programme Director of UCL's Centre for Holocaust Education, who had a longstanding friendship with Leon.

Observed on 27 January each year, Holocaust Memorial Day is an international tribute remembering the six million Jews murdered in the Holocaust under Nazi Persecution, and in the genocides that followed in Cambodia, Rwanda, Bosnia, and Darfur. The date also marks the liberation of Auschwitz-Birkenau, the largest concentration camp.

Leon passed away in 2008, aged 97, with Ruth-Anne by his side. His life’s mission had been to bear witness so that atrocities such as the Holocaust would never happen again. He shared his experiences and humour with thousands of people, including many teachers-in-training at UCL IOE, who say the encounter left a lasting impression on them during their careers.

Ruth-Anne said their connection gave her a rare insight into how Leon lived with the trauma of the past and what drove him to become an activist and force for good despite the suffering he had endured.

She said: "Leon was an unusual friend to have. As a survivor of Auschwitz whose wife and child were murdered, his experiences had driven him to fight for great things – to combat racism through education and campaigning – a mission he continued until in passing in 2008 at the age of 97.

"Yet his trust in human beings never truly returned. It took years to build his trust and one could lose it in a second. In this podcast I reflect on our unusual friendship, how the trauma of the past affected him and his daily struggle with living a ‘normal’ life with the memories of the Holocaust, ever present."

Associate Professor Arthur Chapman (UCL Centre for Holocaust Education) added: "Leon’s story is utterly remarkable and such a powerful way of opening up the narrative of the Holocaust. Personal narratives like Leon’s family story help rehumanise the victims of Nazi violence, genocide and atrocity and telling and retelling them is an act of resistance to hatred and of commemoration of the irreparable damage done to victims and survivors."

The podcast launch is among a series of activities underway at UCL to mark Holocaust Memorial Day. The university’s iconic Portico is being lit up all day on 27 January to remember and pay tribute to victims.

This week Professor Shirli Gilbert (UCL Department of Hebrew and Jewish Studies) gave a special UCL Lunch Hour Lecture - Music on the Brink of Destruction - exploring the role of forced and voluntary music in the Nazi ghettos and camps, showcasing rare recordings that offer insight into victims’ experiences.

Professor François Guesnet (UCL Department of Hebrew and Jewish Studies) has also joined Agnes Kaposi, Fellow of the Royal Academy of Engineering and a Holocaust survivor, in conversation about her experiences.

UCL’s Centre for Holocaust Education is the world’s leading provider of research, innovation and teacher development in Holocaust education. It offers a wide ranging, research-based Holocaust educational programme, working with thousands of trainee and qualified teachers each year.

Listen to Leon Greenman & the struggle for survival from 27 January 2022 at www.holocausteducation.org.uk and through all major podcast platforms.