This week we meet Courtnee Catnott, who recently joined UCL Communications and Marketing (CAM) as Senior Communications Officer. Here, she chats to us about working on EURO 2020 whilst at the Home Office and gives us a sneak peek into the latest project she's been working on. 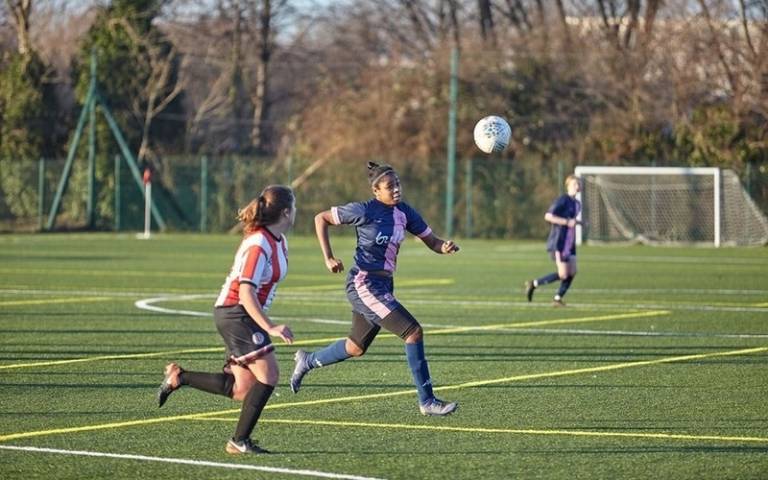 I’m still relatively new at UCL – I have been here for four months. Before joining UCL, I worked as a Press Officer at the Home Office. While I worked on a variety of press desks during my time at the Home Office including Brexit, Crime and Safeguarding (covering domestic abuse and modern slavery), I spent the majority of my time on the Newsdesk, where I spent my days speaking to journalists from the UK’s major news outlets, including the BBC, Sky News and the Daily Mail and working on official Home Office and government statements in response to Home Office policies or announcements that were topical in the news at the time.

The working achievement that I am currently most proud of is the work I did on EURO 2020 whilst I was at the Home Office. I acted as the communications lead for the Home Office’s communication strategy for the tournament and worked closely with individuals from the FA, the GLA and other government departments. I am particularly proud as I had to pull together a communication strategy that successfully covered everything from policing to border controls and counter-terrorism. However, there are a number of projects that I am working on that may knock the Euros off the top spot!

I am currently working alongside Emma Hart in the Communications and Marketing team on the development of the new public campus tour that we hope to launch later this year. The tour will take the public around some of UCL’s most iconic and historical sites on campus where they will explore UCL’s rich and radical history and learn more about some of the key people who have contributed to UCL. I encourage everyone to book onto a tour once they are live!

I know some people find picking a favourite album incredibly difficult but this is an easy one for me – the Emancipation of Mimi by Mariah Carey – it’s the perfect album. My favourite book is Where the Crawdads Sing and my favourite film is The Departed. However, I would say that I would watch a good TV series over a film. I’m currently watching Euphoria and This is Us which are fantastic and I would highly recommend them.

How did Louis XIV feel after completing the Palace of Versailles? Baroque.

Sir Alex Ferguson – I’m a massive Manchester United fan, so it would be a dream to speak to the Boss.

Sir Robert Vansittart – He was the former Permanent Secretary of the Foreign Office from 1930–38. I wrote my dissertation on him so it would be great to chat with the man I spent hours studying!

Sometimes it is just a game...

The top of the Mull of Oa on the Scottish island of Islay. If you can go on a nice day (Scottish weather permitting!), the views are stunning and it’s incredibly calming.