Opinion: Russia may be about to invade Ukraine. Russians don’t want it to. 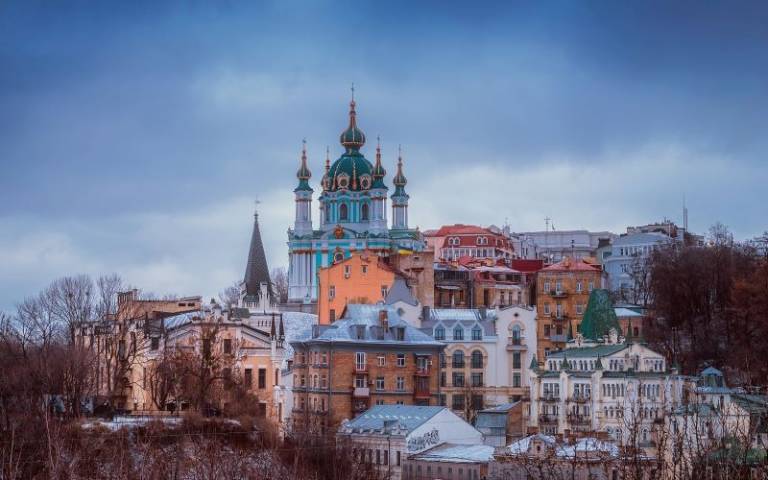 The White House just warned that there is a “distinct possibility” that Russia will invade Ukraine in a “very swift time frame.” More than 100,000 Russian troops are now massed near Ukraine on three sides.

But what does the Russian public think about armed intervention in Ukraine? This question is important. Even though Russia is an autocracy, its leaders pay attention to public sentiment. Our new polling data suggests that invading Ukraine could be a difficult sell within Russia.

Our team has followed Russian public opinion since August as part of the Russian Election Studies, surveys that have asked Russians about the West, NATO and other foreign policy topics since the mid-1990s. Here are four things you need to know about how ordinary Russians view Putin and the events unfolding in Ukraine.

Sending arms or deploying Russian troops into Ukraine is unpopular — and has only become more so as Russians tire of the war Moscow and its proxies have waged in eastern Ukraine since 2014. According to our latest survey of 3,245 Russians in December, just 8 percent think Russia should send military forces to fight against Ukrainian government troops there. Only 9 percent think Russia should train or equip separatist forces with Russian arms.

Support for armed intervention has fallen by nearly half since 2016. And that drop has occurred among supporters of Putin’s United Russia Party, Communists and the nationalist LDPR party alike. Among those most nostalgic for the Soviet Union, for whom restoration of the Soviet sphere of influence could be expected to resonate most, fewer than 10 percent want to see Russian troops fight in Ukraine.

If Putin does invade Ukraine, he will have to convince the Russian people that it was the right move or risk harm to his popularity, which remains lower than during most of his time in office. It takes effort, even with a formidable state media apparatus, to effectively shift public opinion — which suggests that the Kremlin would be making a wager about how far, how fast and among which groups it can succeed. The uncertainty entails risk.

This is especially true given that Russia’s government-controlled media have emphasized that Moscow has no plans to invade. The information barrage against Ukraine and the West that accompanied Russia’s 2014 annexation of Crimea so far has not arrived. To change tack now would require a heavy propaganda lift.

Of course, public opposition has not always constrained Putin’s actions. Russians were not eager for war in Ukraine before the 2014 annexation of Crimea, and polls before Russia’s intervention in Syria showed opposition. Yet public opinion changed quickly as events on the ground unfolded — and this could, in principle, happen again. Once Ukrainian President Viktor Yanukovych fled the country in 2014 amid the Euromaidan protests, Russian state media kicked into gear. Public opinion toward Ukraine deteriorated very rapidly.

The Kremlin might be wagering that it can persuade Russians to align with whatever decision Putin ultimately makes about Ukraine. In recent years, Putin has tightened control over Russian media and sidelined critical journalists and independent outlets. Meanwhile, Russians (like other publics) are less focused on foreign policy than domestic policy. Even as the conflict along Ukraine’s border escalated in late 2021, fewer than 5 percent of Russians nationwide ranked any foreign policy issue — including Russia’s position in the world, relations with the West or the situation in Ukraine — among the top three issues facing Russia.

Still, there is reason to think securing public support for a wider conflict in Ukraine will not be as easy as it was to secure public approval for the annexation of Crimea. Surveys well before Russia took over Crimea showed that most Russians thought Crimea was actually Russian territory — but that’s not how Russians see the rest of Ukraine. People have consistently opposed annexing Ukraine’s Donbas region, for example. And polls over the past decade show that Russians do not in fact want to annex Ukraine to re-create the Soviet Union.

This has long been the pattern under Putin, and our polls indicate no ratcheting up of hostility toward the West either during the September parliamentary election or as Russia mobilized more troops to Ukraine’s border between August and December.

Russians also do not see Putin as favoring a hostile stance toward the West. In December, a majority said Putin thinks Russia should treat the West as an ally (39 percent) or friend (11 percent). This has been the case in all prior Russian Election Studies surveys dating back to 2003, when the question was first asked.

The surveys also suggest that while Russians do not want to annex Ukraine or to treat the West as an enemy, they do think it is important to resist NATO. At home, Putin has been emphasizing that NATO is to blame for the ratcheting up of tensions, and the public appears to share this view. Three in 4 Russians we surveyed think NATO will try to weaken their country if Putin does not stand up to it. Consistently over many years, surveys show that Russians see NATO as a threat even as they want good relations with the West.

While Russians oppose a broader conflict in Ukraine and would rather not approach the West as an antagonist, standing up to NATO is a popular theme. It’s likely that a strategy of hard-nosed and prolonged negotiations would be more popular with Putin’s domestic audience than armed intervention. But time may be running out.

This article first appeared in the Washington Post on 11th February 2022.