Professor Mark Galeotti (UCL School of Slavonic & East European Studies) considers Putin’s endgame and says he may be deluded about his invasion of Ukraine. 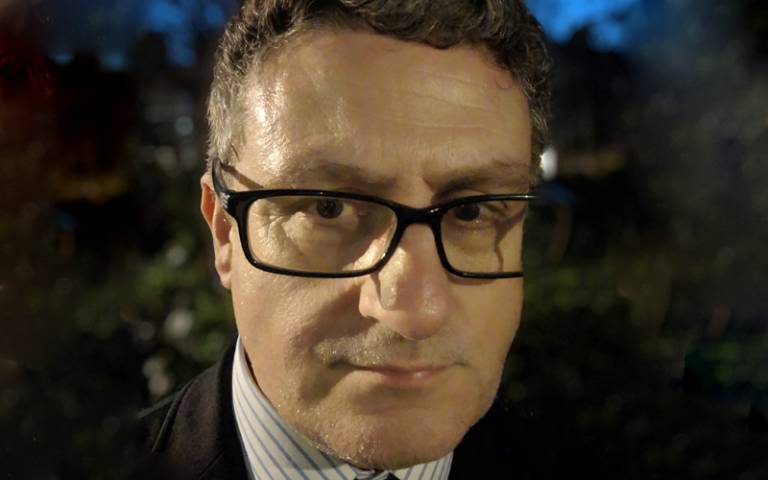 Vladimir Putin's address announcing the Russian invasion of Ukraine – delivered at 3am UK time yesterday – was the stuff of nightmares.

By turn rambling, terrifying, apocalyptic, he warned: 'Whoever tries to hinder us, and even more so to create threats for our country, for our people, should know that Russia's response will be immediate and will lead you to such consequences that you have never experienced in your history.'

Within hours, bombs and missiles were raining down on Ukraine. Russian troops and tanks have poured over the border.

Hundreds of Ukrainian soldiers have been killed and civilian casualties are mounting.

Putin's justification for invading might have been laughable if not for these horrific consequences. He claimed, absurdly, that the Russian mission was to 'de-Nazify Ukraine' – while behaving exactly like the Nazis who invaded Ukraine in 1941.

He played both victim and bully. One moment he was whining that Nato's 'Eastward expansion' was 'dangerous for Russia'.

The next he was threatening that Russia remains 'one of the most powerful nuclear states' with 'cutting-edge weapons'.

This was Putin unfiltered, his words and demeanour giving us a horrifying glimpse into the dark recesses of the mind behind this seemingly inexplicable step.

Many are asking whether Putin is deranged. Why else would he destabilise the world order by invoking the nuclear threat?

Why else commit Russia, with its economy in freefall, to a bloody, costly war?

To explain Putin's actions as those of a madman would be easy but wrong. As his biographer, I believe he is not mad. Rather, he is acting rationally, according to his own warped, ill-informed world view.

I used to live in Moscow on the road between Putin's country house and the Kremlin. I would see his motorcade speed by, blacked out windows and heavy security, symptomatic of his dark, defensive psyche.

Like most bullies, his aggression stems from insecurity. He grew up poor, in the rubble of post-war Leningrad – now St Petersburg – in a working-class family in a grim block of rat-infested flats.

He joined a street gang and learned it pays to throw the first punch.

While still at school he applied to join the KGB, the biggest gang of all. But just as his KGB career was flourishing, the Berlin Wall fell, and with it the Eastern bloc and then the USSR itself.

Putin was based in the KGB office in Dresden, surrounded by anti-communist crowds. He was scared and furious: he had risen through the ranks only for the system to collapse beneath him.

He, like many of his ilk, blamed the-then Russian president, Mikhail Gorbachev. He saw him as a 'weak' leader who betrayed Russia by giving away her empire.

He has never come to terms with its loss. Thirty years on, he sees himself as the man to right that wrong.

Putin knows – and understands – little of the West, but believes implacably that it is dishonest in all its dealings, and that Westerners have no respect for Russian culture.

He steadfastly believes that the West is out to get Russia. Until recently, this fear was tempered with caution.

Despite his macho posturing, Putin has been calculating in his 20 years at Russia's helm, not impulsive.

When he invaded Georgia in 2008, he needled the Georgians to move first. He waited till Ukraine was in political chaos before seizing Crimea in 2012.

But today Putin is a self-caricature. Wariness has turned to paranoia, cool hostility to unrestrained aggression.

Why? Age is one reason. Putin is 69, and, for all the Botox, the workouts and attempts to hold back time, it is marching on.

He is an old man in a hurry, obsessed with history – although he misunderstands and misinterprets it.

Whenever he is introduced to a historian, he demands to know just one thing: 'What will be posterity's epitaph on me?'

He wants to be remembered as the man who saved Russia and regained Ukraine. He feels this is his last chance.

With a stagnant economy and rampant crime, he knows Russia looks weak. His show of force, assembling troops on Ukraine's borders, was designed to compensate by instilling fear.

If he was wily, he would have kept them there, waiting for Ukraine's economy to disintegrate, without a shot fired.

So why didn't he?

Covid has played a role. Since the pandemic started, Putin has retreated. He hasn't travelled, even within Russia, ferried between his sumptuous palaces and the Kremlin by limousine and helicopter.

He has seen few people outside his inner circle. Anyone granted an audience had first to isolate for two weeks in a state hotel, watched over by armed guards.

Before meeting the President, he or she then had to pass through a special tunnel in a mist of ultraviolet light and disinfectant. Such is Putin's paranoia.

And his world view has become ever smaller and darker. Putin doesn't even have a smartphone. He is disconnected from reality.

It wasn't always like this. Putin used to listen to professionals who would tell him the facts, his generals and economists. But most of these advisers have been side-lined.

Even the astute foreign minister Sergei Lavrov is no longer consulted, simply wheeled out to defend decisions already made.

Now, the President surrounds himself only with hawks and yes-men, mostly ageing former KGB hardmen like himself. Their job is to agree with him.

A former Moscow intelligence officer told me: 'You do not bring bad news to the tsar's table.'

Those who survive are the ones who tell him what he wants to hear.

This was evident at the televised meeting of Russia's Security Council on Monday night when a smirking Putin publicly bullied his senior officials, humiliating them, to appear the strong man.

The truth is that Putin has deluded himself that the invasion of Ukraine will be rapid and successful, and that he can install a puppet government without a long, bitter war of occupation. There is no one left to tell him he is wrong.

He acts like a Tsar: unaccountable, arrogant, heedless of the price that Ukrainians and Russians will pay for his obsession with history. He is not mad, but evil.

I do not believe that any further territorial expansion is likely. Unless he retreats – unlikely, as he could not bear such loss of face – he will become bogged down in Ukraine for years.

Putin's endgame is for the West to recognise Russia as a great power and for the countries of the old Soviet Union, except the Baltic States, to fall in his sphere of influence. For the KGB hardman, it's all about respect.

But his methods don't earn respect – only fear. I suspect Vladimir Putin, ever the street gang bully, doesn't understand the difference.

This article first appeared in Mail Online on 25th February 2022.