Opinion: Cranes - why Britain’s tallest bird just had its best breeding year since the 1600s

The total population of cranes in the UK is now believed to be over 200 thanks to the careful guarding of nests and a carefully designed breeding programme, says Honorary Professor Richard Gregory (UCL Division of Biosciences). 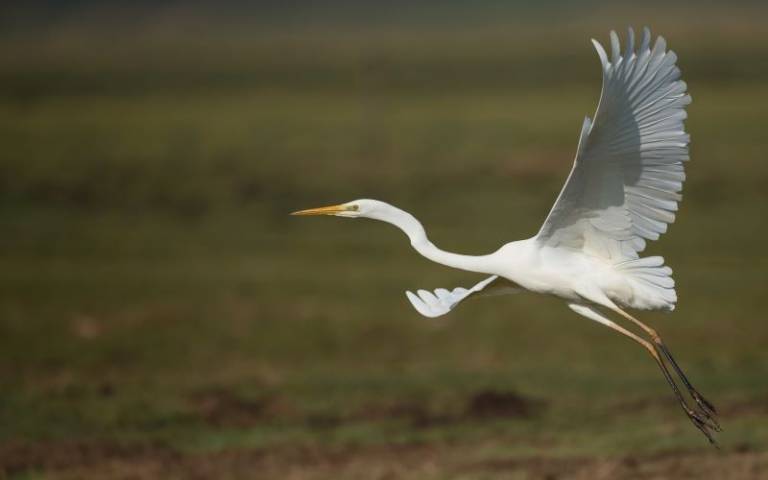 Binoculars in hand, I’m hunkered down beside the floodplain at the RSPB’s Nene Washes nature reserve in Cambridgeshire, England. It’s a cold, late-winter morning and there are few people around, but I’ve come early to try to get a glimpse of a giant among British birds: the common crane.

There are few wildlife spectacles as impressive as cranes performing their courtship dance. The graceful, leggy common crane (Grus grus) stands at a lofty four-foot tall. It has a dove-grey body, black-and-white neck, crimson crown, and a black bustle. It is one of the loudest birds in Europe too: their deep, bugling call can be heard 6km away.

Pairs are monogamous and stay together throughout the year, reinforcing their special pair bond each spring. They strut their stuff, in a dance consisting of elaborate leaps, bows and pirouettes, trumpeting as they go.

It’s hard to imagine this was once a familiar sight and sound in the UK, yet 400 years ago cranes were common across the country’s wetlands. They were also, unfortunately, a favourite dish at medieval feasts: some 115 cranes were reportedly served at Henry III’s Christmas banquet at York in 1251. Pressure from hunters, combined with shrinking wetlands, led to their extinction as a breeding bird around 1600, with the fenlands of East Anglia remaining one of their last strongholds.

Once lost, cranes became a rare visitor. Between 1773 and 1950, there were just 73 records in the UK as passage migrants: in spring heading towards northern Europe and in autumn heading south towards Iberia. It wasn’t until the 1950s that crane visits became annual, thanks to a recovering population in continental Europe.

I’m watching cranes now thanks to the work of dedicated conservationists. First, by a handful of people who made it their mission to bring cranes back, and increasingly, by partnerships of like-minded people and organisations. This has involved careful guarding of nest sites as cranes reappeared under their own steam in East Anglia, alongside a carefully designed captive breeding programme in south-west England.

These efforts are paying off: 2021 proved to be the most successful year for cranes since the 17th century. A record-breaking 72 pairs were present in the UK, 65 of which attempted to breed, rearing an impressive 40 chicks. The total population, counting breeding and non-breeding birds, is thought to stand at over 200.

It was in the autumn of 1979 that two cranes reappeared in the Norfolk Broads. These (presumed wild) birds paired up and attempted to breed in 1981 without success, but in the following year managed to fledge a single chick – thought to be the first in the UK for over 400 years. Another followed in 1983.

Recolonisation proceeded very slowly in part because these long-lived birds can take four years to mature and typically only lay two eggs. The number of chicks remained low under high levels of predation, the main culprits being foxes. Just four young fledged from 14 breeding attempts over the first 11 years.

In 1992, it was decided that cranes needed a helping hand and captive breeding was trialled, but without success. The population’s fortunes seemed to change in the late 1990s, as their productivity improved and more and more young were successfully raised. This boost, along with work to restore and improve existing wetlands, enticed them to other parts of England, including Natural England’s Humberhead Peatlands, RSPB’s Lakenheath and where I sat in the Nene Washes.

In 2006, the RSPB, Wildfowl and Wetlands Trust, Pensthorpe Conservation Trust and Viridor Credits launched the Great Crane Project with the aim of returning breeding cranes to other parts of their former range. In 2010, 20 hand-reared juvenile cranes were released onto the Somerset Levels and Moors and this population has steadily grown and expanded its range. Now, cranes are nesting in many English counties, and have even returned to Scotland and Wales.

Staring over the floodplain, my patience is rewarded as the sedge (the collective noun for a group of cranes) flies in. Here on the washes, the marshland provides the perfect place for protective parents to raise chicks during the summer. But cranes are notoriously difficult to spot when they have chicks and are generally wary. The best time to see them is during the winter when they form flocks and it is always best to watch from a good distance to avoid disturbing them.

On this reserve, they roost overnight, waking at sunrise, and flopping over to feed on adjacent arable land. Cranes eat a variety of food in the breeding season, including invertebrates, lizards, small fish and frogs – all important fuel for their growing chicks. During the winter, they are mainly vegetarian and will feed on root vegetables left over in the fields.

Around 50 of these majestic birds now swoop down to land. They seem more preoccupied with finding food than performing courtship displays. Things are looking up for cranes. I can see several pairs with one, or even two, downy young in tow, and it makes me excited for their future.

This article first appeared in The Conversation on 3rd February 2022.