A new drug has shown promise in slowing the regrowth of tumours among some bowel cancer patients, according to new findings of a major trial run by researchers at UCL in collaboration with Oxford, Leeds and Cardiff universities. 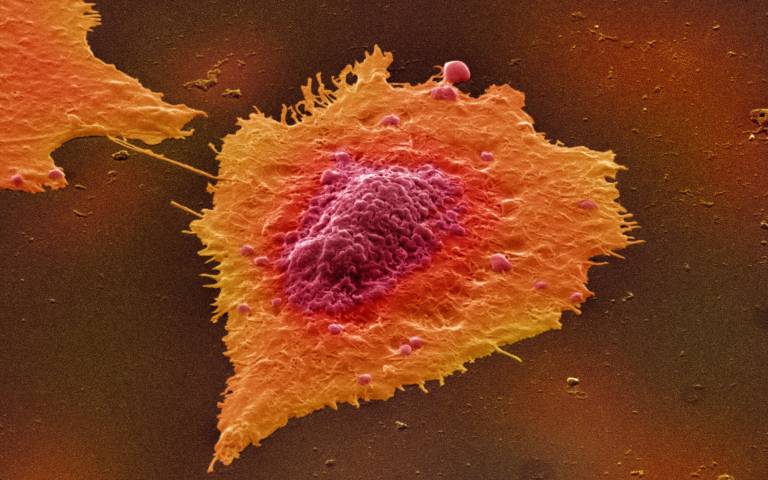 The results of the FOCUS4-C trial, which was funded by Cancer Research UK, the EME Programme - an MRC/NIHR partnership - and AstraZeneca, will be presented on Saturday (18 September) at the European Society of Medical Oncology and published in the Journal of Clinical Oncology. The trial looked at whether a drug called adavosertib, taken in the form of a daily pill, could delay tumour regrowth among patients with an aggressive sub-type of inoperable bowel cancer who have limited treatment options.

Comparing 44 patients who took adavosertib with 25 patients who did not, the researchers found that the drug delayed tumour growth by about two months on average and had relatively few side effects. The drug had more effect in the 31 patients with left-sided/rectal tumours, increasing overall survival – that is, patients lived longer.

The researchers caution that these are early results and that larger trials are needed to establish whether the drug improves survival compared to standard treatment. The trial tested adavosertib among patients who were on a treatment break following chemotherapy but the drug could potentially benefit patients with other types of bowel cancer or alongside standard treatments in other lines of therapy.

The subset of patients who took part in the trial had tumours with two common mutations, RAS and TP53, that the researchers hypothesised would make the tumours more sensitive to the effects of the drug. About a third of all colorectal cancer patients have tumours with these two mutations.

Bowel cancer is the fourth most common cancer in the UK and the second biggest cancer killer. Over 42,000 people are diagnosed with bowel cancer every year in the UK.

Lead author Dr Jenny Seligmann, of the University of Leeds, said: “These results show promising signs that adavosertib may be effective in delaying re-growth of bowel cancer in some patients and is well tolerated. The findings are particularly encouraging as the subset of patients involved represent a third of all bowel cancer patients and, while other patients have treatments developed specifically for their tumour types, this group currently has very limited treatment options.”

The findings come from one part of a large collaborative UK trial called FOCUS4 which aimed to investigate the best ways to help people with inoperable bowel cancer who have already received some chemotherapy.

More than 1,400 people with bowel cancer took part in the FOCUS4 trial programme. Blood samples and tumours were analysed and some of those enrolled took part in additional randomised controlled trials that tested new drugs in people whose cancer had particular chemical changes that suggested those drugs might be effective.

Co-author Professor Louise Brown (MRC Clinical Trials Unit at UCL), statistical lead for the FOCUS4 trial, said: “Our UK-wide trial is the first in the world to investigate potential treatments for bowel cancer by stratifying patient groups according to the chemical make-up of their tumours. This allowed us to test a number of new approaches at the same time which is a more efficient way of testing treatments. The results for the adavosertib arm of the trial are potentially important and represent a glimmer of hope for patients in this group.”

Adavosertib kills cancer cells by inhibiting WEE1, a protein that helps to regulate the process of cell division in the tumour by ensuring that any DNA damage is repaired before cells divide.

Researchers believed that tumours with the mutations RAS and TP53 would be particularly sensitive to this form of attack, as these mutations have already placed the process of cell replication under stress.

FOCUS4 chief investigator, Professor Tim Maughan, of the University of Oxford, said: “WEE1 inhibitors target the DNA repair process in tumour cells. A similar strategy is used to treat some ovarian and breast cancers with drugs called PARP inhibitors. However, this is the first time this strategy has been successfully used to treat bowel cancer.”

Side effects of the drug included fatigue, diarrhoea, neutropenia (involving low levels of white blood cells called neutrophils), and nausea, but none of these occurred in more than 11% of patients.

A second new study from a separate part of the FOCUS4 trial called FOCUS4-N, also published in the Journal of Clinical Oncology, looked at outcomes among patients who had a complete break from treatment following chemotherapy, comparing them to outcomes among those who continued chemotherapy using a simpler tablet called capecitabine.

The researchers found that, among those who had a complete break, the cancer started to grow somewhat sooner than in those on continued maintenance therapy, but that maintenance therapy did not lead to an increase in how long people lived.

Lead author Professor Richard Adams, of Cardiff University, said: “The findings will help to inform discussions between patients and clinicians about treatment options at the end of four months of therapy - that is, whether to stay on oral chemotherapy long-term or have a complete break in treatment – giving patients better control of their cancer management.”

Michelle Mitchell, Cancer Research UK’s chief executive, said: “While this trial was set up to explore a new drug that could help delay bowel cancer returning in patients who are on a chemo break, it’s opened up the possibility that adavosertib could also be used in patients with bowel cancer who have limited treatment options.

“New treatments for this group of people have the potential to be life changing and we’re looking forward to seeing the next stage of this research.”

Professor Nick Lemoine, Medical Director of the NIHR Clinical Research Network said: "Defining the key molecular changes that drive a particular individual's cancer will allow the right patient to receive the right drug at the right time. The early results of this trial for bowel cancer patients suggest that detecting changes in two genes could allow selection for active treatment with a well tolerated drug given by mouth. Clinical trials such as FOCUS4 allow multiple drugs to be tested in parallel arms of the study, speeding up the time to build convincing evidence for their use in routine NHS practice in the future."

The FOCUS4 trial is funded by the EME Programme - an MRC/NIHR partnership - and Cancer Research UK and is run from the MRC Clinical Trials Unit at UCL in collaboration with Oxford University, Leeds University and Cardiff University.