National Curriculum Key Stage 2 tests taken by 10- and 11-year-old children in England to assess progress in English and Mathematics do not seem to affect children’s wellbeing, according to new UCL-led research. 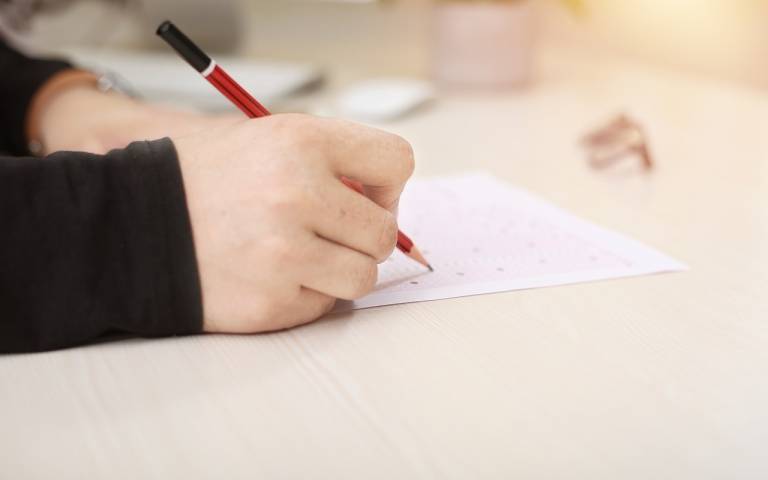 The peer-reviewed study, published today in Assessment in Education, analysed data from around 2,500 children who live in England (where the KS2 tests are conducted) and in Northern Ireland, Scotland and Wales (where the tests do not take place) and are all participants of the Millennium Cohort Study (MCS).

The study found there was little difference in the wellbeing and happiness levels reported by the children regardless of where they lived and whether they took the KS2 tests or not. Additionally, among those who did sit the tests, there was no significant change in how they felt about themselves, their school or their family life in the weeks preceding and following the tests.

Study author Professor John Jerrim (UCL Social Research Institute) explained: “There is growing concern about the mental wellbeing of young people, including how this is related to national tests at school. However, the study found that happiness and wellbeing levels among children in England and the rest of the UK were very similar to one another and often overlapped.

“The research also found there was little evidence to changes in wellbeing around the time of Key Stage 2 tests, or that children in England become happier – either in general or about school – once these tests are over. Equally, there was no evidence to show that pupils who were happier or more self-confident in the build-up to the tests achieved higher scores.

“Taken together, these findings provide an important counter to conventional narratives about how the Key Stage 2 tests can have serious negative impacts upon children’s wellbeing.”

Children were asked a series of questions on how they felt about themselves and their lives in the lead up to and weeks following the Key Stage 2 tests. For example, 24% of school children in England said they felt unhappy about their schoolwork prior to the tests and this figure was 28% for children in the rest of the UK. This figure did not significantly increase or decrease in the weeks prior to and after testing.

The study highlights that Key Stage 2 tests are considered “high-stakes” for schools whose results get published in school league tables. However, they are not necessarily “high-stakes” indicators for pupils. For example, no educational decisions about the secondary school a child will attend or the subjects they might study depend on achieving certain scores in Key Stage 2 tests.

The author notes that as with every study there are limitations. The study uses MCS data from 2012 and although it is unlikely to undermine the key findings, several reforms have been made to national assessments so stronger effects on pupil wellbeing could be found if the importance attached to these tests has increased.

Professor Jerrim added: “When we turn to education policy in England what do these results mean? Given what we found, there does not seem to be strong enough evidence to support Key Stage 2 tests to be scrapped on wellbeing grounds.

“The tests play a fundamental role feeding into school accountability metrics and our findings suggest they should continue in their current form for the foreseeable future. We need more high-quality research to better understand both the positive and negative effects these tests have on young people, especially in light of the challenges teachers and pupils have faced throughout the pandemic.”