UCL is turning ground-breaking science and ideas into actions to tackle climate change with the launch of its campaign Generation One ahead of the UN’s COP26 summit in Glasgow in November. Staff and students returning to campus for the new academic year have been welcomed back with a call to join a new era of climate action, inspired by the words of former US President, Barack Obama: “We are the first generation to feel the effect of climate change, and the last generation who can do something about it.”

Generation One offers everyone the chance to understand the science behind the issues facing our planet, highlighting UCL’s role in driving debate and solutions and empowering everyone to feel they can contribute, rather than being overwhelmed by the challenge.

The first phase of the campaign includes a wide range of free learning events and activities open to the public as well the university’s students and staff. It also poses a set of 26 intriguing questions relating to everyday lives and the race to net zero emissions - from food to fashion and from transport to finance. Each can be explored through an exhibition on UCL’s Bloomsbury campus in London and online through the Generation One website.

Richard Jackson, UCL Director of Sustainability, said: “At a time when the real impact of the climate crisis is playing out all over the world, we wanted to give people a sense of hope rather than fear – this campaign is about looking forward and the art of the possible, learning and acting in solidarity together.

“UCL is leading the way in many areas of climate science, action and policy. Our experts will be at COP26 in Glasgow in force to inform both the debate and actions to protect the future of our planet. Here in the heart of London we also want to bring the debate alive and empower individuals and communities to take action too.”

The first ever Welcome Week Sustainability Fair helped to kick off the campaign on campus. Dozens of activities enabled students to embrace the Generation One message - including an outdoor cycle-powered cinema in front of UCL’s iconic Portico building, which saw film goers taking turns pedalling to power the screen. 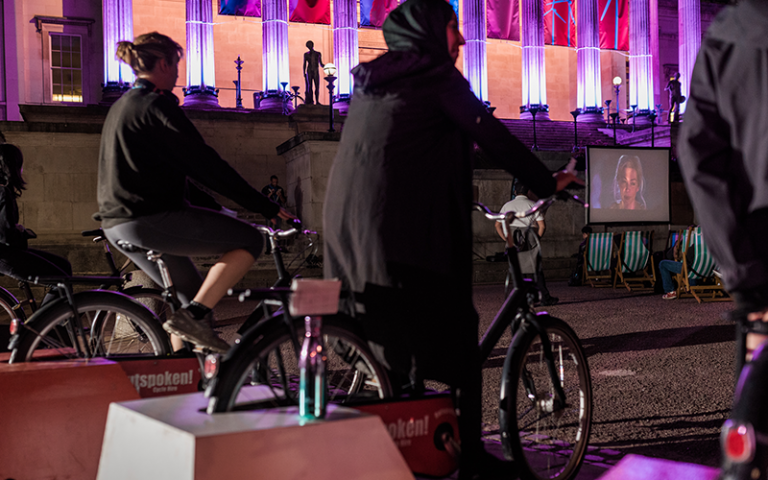 Hannah Biggs, Project Lead for Sustainable UCL, said: “From putting in place the support to create sustainable businesses to how we’re embedding sustainability across all our degrees and research, the Fair saw more than 1,000 students getting involved and inspired to create the future they want to see. We’re just beginning with this campaign but that’s Generation One in action!”

Many more events are taking place at UCL over the next month as part of the campaign, including:

Commenting on Generation One, Professor Mark Maslin, UCL Professor of Earth System Science, said: "We are the first generation to tackle the climate and environmental crisis. At the heart of this new UCL campaign is the development of win-win-win solutions - real actions that make people safer, healthier, wealthier while ensuring we save our precious planet for ourselves and future generations. I look forward to taking the campaign and its message to COP26 with UCL’s 'Team Glasgow', where we will be at pushing for an ambitious wide-ranging international net zero emissions agreement which empowers meaningful action at all levels of society."

The launch of Generation One follows the creation of the UCL Climate Hub earlier this year, which showcases some of the key actions UCL is taking to help achieve a zero carbon university by 2030.

To find out more about the campaign and how you can get involved, follow #UCLGenerationOne and join our new era of climate action.