Graduates voice their views on loans and debt in new report

Graduates in England praise income-contingent and repayment features of the student loan system but criticise the high fees and large debts, according to a new report involving a UCL Professor. 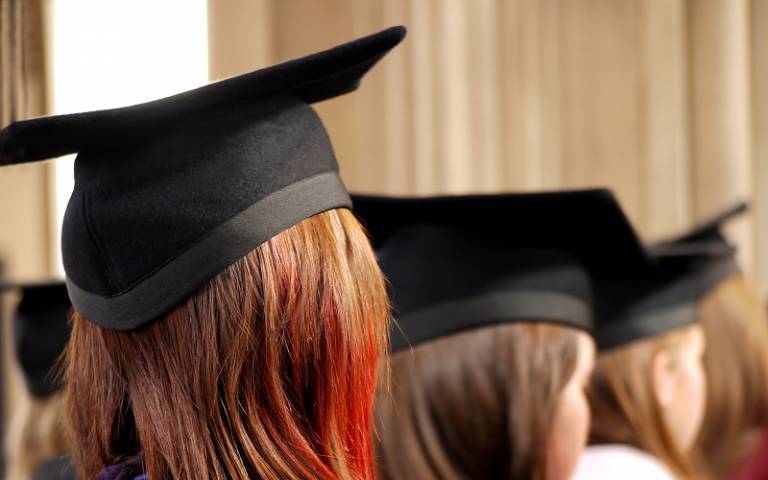 The report from the Higher Education Policy Institute (HEPI) and the Centre for Global Higher Education (CGHE), which is co-authored by Professor Claire Callender (UCL Institute of Education and Birkbeck, University of London), is based on interviews with 48 graduates who were students under the 2006 funding regime paying tuition fees of £3,000, and 50 more who studied when the 2012 regime came into effect, paying £9,000.

The participants believed that income-contingent student loans offer access to higher education and regarded the repayment system as manageable, with the income repayment threshold protecting against low earnings. Monthly repayments were seen as affordable and automatic repayments were valued.

However, the graduates considered tuition fees and interest rates to be too high. They saw the amount of debt owed as a burden and expressed that the repayment period felt ‘never-ending’. Graduates in the post-2012 reforms cohort were considerably more negative about their student loan debt, causing some anxiety and despair. The knowledge that their debt will likely never be repaid fully exacerbated the emotional and psychological toll.

Since the 1990s, England’s higher education funding system has been reformed many times, leading to a system predicated on high fees and loans. Undergraduate tuition fees for full-time students were introduced in 1998, and rose to £3,000 per annum in 2006, increasing further to £9,000 in 2012 and £9,250 in 2016. The 2012 reforms increased the proportion of students reliant on loans, the amount they borrowed, and the burden of student loan debt.

Professor Claire Callender said: “Our findings suggest it is important to listen to graduates’ different views and integrate them in debates on the future of higher education funding in England. Graduates offer a distinctive perspective on student loans which has been ignored but is vital for building evidence-based, sustainable and fair funding policies in the future. Their experiences may not always be easy to listen to and may be contrary to policymakers’ thinking, intentions and vision.

“Nonetheless, there are significant lessons for policymakers. While there may be benefits for some to the 2012 funding reforms, the changes exacerbated the very features of the student loan system graduates already found problematic and increased the burden of student debt. Graduates’ experiences raise important policy questions: why should the loans of even the poorest post-2012 students accrue such high interest rates while they are studying and before they reap any financial benefits from their higher education? Why burden students and graduates psychologically and materially with enormous debts when most will never fully repay them? And is the student loan system and the income it generates for the Treasury really worth the potential long-term consequences for graduates’ welfare, life choices and opportunities, affecting the lives of generations to come?"

Co-author Dr Ariane de Gayardon (University of Twente) said: “Debt can take a psychological toll on graduates arising from the size and longevity of the debt, alongside the interest charged. All can potentially damage the lives and aspirations of future generations. When reforming the loan system, one objective should be to reduce the burden of student debt for graduates. To do so, we need to listen to the voices of graduates. Our new report provides important insights into what graduates feel about the English student loan system and which features work for them, and which do not.”

The Centre for Global Higher Education is an international research centre focused on higher education and its future development. CGHE is a research partnership of 15 UK and international universities, including UCL, and is funded by the Economic and Social Research Council, with support from Office for Students and Research England. Professor Claire Callender is Deputy Director of CGHE.