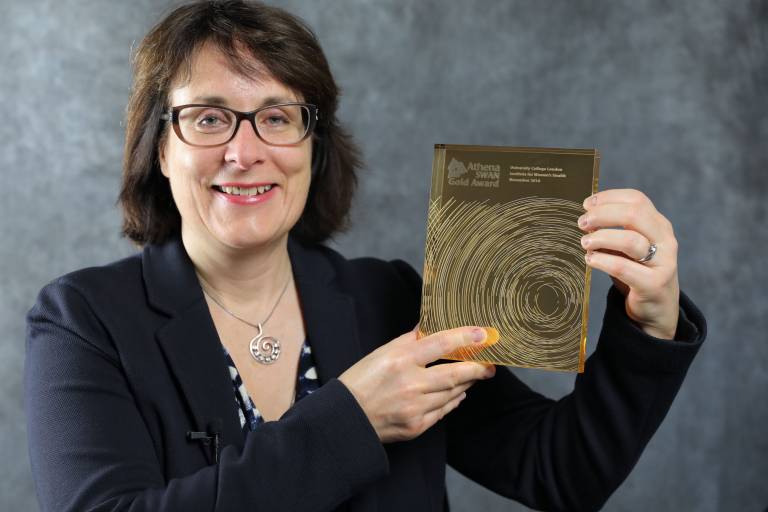 The awards, which reflect adherence to the Athena SWAN charter gender equality framework, are used across the higher education sector used to improve gender representation, progression and the working environment for all staff. UCL now holds more of these awards overall than any other UK university.

The Elizabeth Garrett Anderson (EGA) Institute of Women’s Health (IfWH) has retained its Gold status, making UCL one of only two universities in the UK to have achieved three Golds since the inception of the awards in 2006.

UCL was one of the first institutions to sign up to the Charter and now holds a pan-institution Silver award. The latest honours mean that a total 41 departments, divisions and institutes from across the university hold Athena SWAN awards: 21 Bronze, 17 Silver and three Gold.

Gold awards are given to departments that can evidence 'beacon' activity to promote gender equality in their discipline at a national level. There are only 16 across the UK, with UCL holding three. UCL’s Great Ormond Street Institute of Child Health and the UCL MRC Laboratory for Molecular Cell Biology have also previously been given Gold status.

Dr Suzy Buckley, Vice-Dean for Equality, Diversity and Inclusion (EDI) for the Faculty of Population Health Sciences and Institute for Women’s Health EDI team co-lead said: “We are absolutely delighted that our continued efforts to deliver sustained impact on gender equality have been recognised through this national award. It has only been possible through our continued engagement and by embedding these principles in all day-to-day aspects of our working lives.”

The Athena SWAN panel was unanimous in its decision for the UCL IfWH Gold award and praised the institute for its sustained efforts and achievements.

The panel highlighted the introduction of job sharing, including the Director’s role, which led to an increase in women involved in senior leadership roles, both within UCL IfWH and elsewhere.

UCL IfWH Director Professor Anna David added: “This renewal of Gold demonstrates the commitment of the Institute for Women’s Health to continue its focus on gender equality in all that we do. We value diversity and strive for institutional culture and processes that foster the health and wellbeing of all staff and students. I am so very proud of everyone who is putting equality, diversity and inclusion at the heart of our community and our academic strategy.”

In preparation for UCL’s submissions this year, 31 staff volunteered to review the departmental applications as part of an internal mock panel process.

Professor Tim Levine, who co-chairs the Equality Challenge team at UCL Institute of Ophthalmology as well as UCL’s Athena Forum, described the panels as ‘transformative’, commenting: “Giving this small amount of support to the Athena SWAN journeys of other departments was so useful to create local understanding of the true purpose of our application. Our writing became more accurate at delivering what our readers would need to see. I would encourage colleagues to engage in this process to increase your chances of success.”

Sasha Roseneil, UCL’s Pro -Provost for Equity and Inclusion, said: “A commitment to gender equality is a core part of our collective values at UCL, and Athena SWAN gives us a powerful mechanism for driving change and monitoring progress on the path to becoming a fully equitable and inclusive university. An enormous amount of work has gone into achieving this latest round of awards, and I would like to congratulate and thank everyone who has been involved.”

For more information on Athena SWAN and how to get involved, visit UCL’s Athena SWAN SharePoint.