The remains of a partial skeleton dating back 78,000 years have been recovered from a pit in Kenya and are believed to be the earliest evidence of human burial in Africa, according to an international team including academics from UCL. 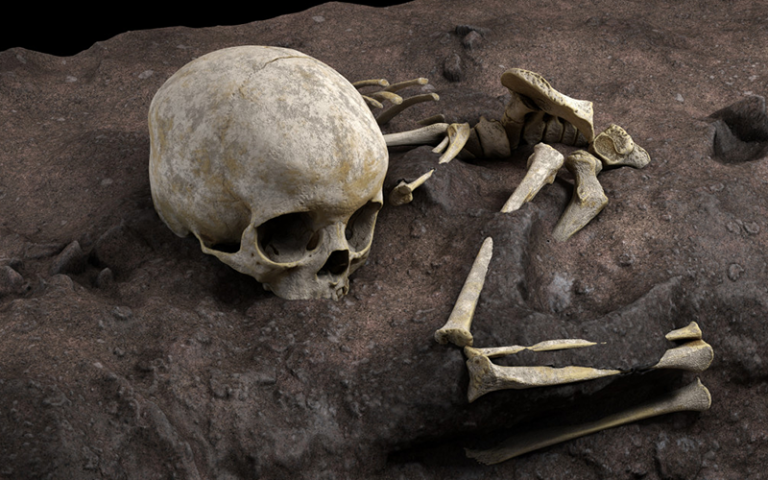 Named ‘Mtoto’ – meaning child in Swahili – the remains were found to be of a 2.5 to 3-year-old infant, and were discovered by a team of scientists in a shallow grave at Panga ya Saldi, a cave site in the tropical upland coast of Kenya.

Analysis on the bones and surrounding soil, published today in the journal Nature, indicate that Mtoto’s body was prepared and buried shortly after death.

The new discovery has added to the growing evidence of early complex social behaviours in our species. Sites of this kind documenting early evidence of formal burials of Homo sapiens in Africa are scarce, with very little currently known about the origin and development of human mortuary practices – an important component of our evolution.

Panga ya Saidi has been a significant site for understanding human origins  since excavations began in 2010, emerging as one of the key Middle and Later Stone Age sites in Africa.

Whilst portions of the child’s bones were first found there during excavations in 2013, it wasn’t until four years later when excavations were expanded that the small circular pit around three meters below the cave floor containing the highly decomposed bones was fully exposed.

Given the poor preservation of the bones, the remains were stabilised and plastered in the field, and brought to the National Museum in Nairobi. They were later taken to the laboratories of the National Research Centre on Human Evolution (CENIEH) in Burgos, Spain, for further excavation, specialised treatment and analysis.

Dr María Martinón-Torres, CENIEH Director and Honorary Professor (UCL Department of Anthropology), said: “We started uncovering parts of the skull and face, with the intact articulation of the mandible and some un-erupted teeth in place. The articulation of the spine and the ribs was also miraculously preserved, even conserving the curvature of the thorax cage, suggesting that it was an undisturbed burial, and that the decomposition of the body took place right in the pit where the bones were found.”

José María Bermúdez de Castro, Honorary Professor in Paleoanthropology (UCL Department of Anthropology) said: "The discovery of Mtoto in Panga ya Saidi is a hugely exciting and significant event, enabling us to understand more about the human mind more than 70,000 years ago. When a case like this shows unequivocally that Homo sapiens buried their dead at that time, it means that funereal practices had already been socialised – confirming beliefs about the deep rootedness of the culture and meaning of death for our species.

“Further excavations of African sites dating from the Middle Stone Age must be extremely careful to make sure that we’re able to recover additional hugely valuable information about our culture."

The team used luminescence dating to assess the age of the remains, measuring thousands of individual grains of sand from samples within the burial pit and surrounding sediments, and establishing the amount of time that has passed since the sand grains were exposed to sunlight. This method securely placed Mtoto at 78,000 years ago, confirming this discovery as the oldest known human burial in Africa.