New insight into when CAR T is effective against childhood leukaemia

Scientists and clinicians at UCL and Great Ormond Street Hospital (GOSH) studying the effectiveness of CAR T-cell therapies in children with leukaemia, have discovered a small sub-set of T-cells that are likely to play a key role in whether the treatment is successful. 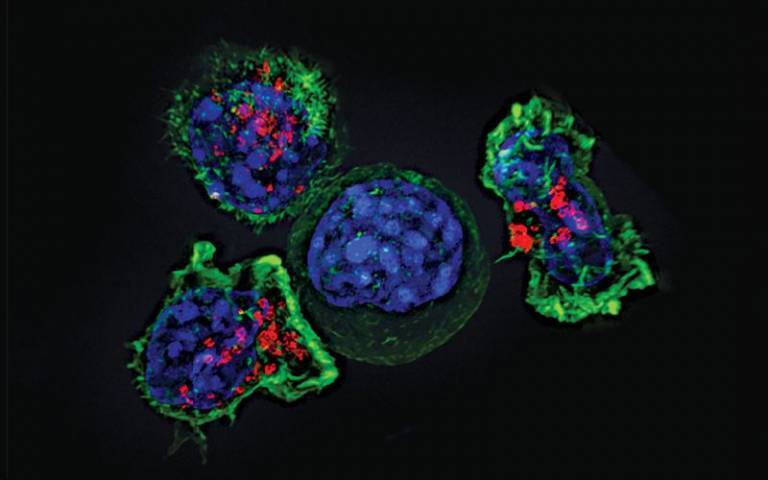 Researchers say 'stem cell memory T-cells' appear critical in both destroying the cancer at the outset and for long term immune surveillance and exploiting this quality could improve the design and performance of CAR T therapies.

Explaining the study, published in Nature Cancer, lead author Dr Luca Biasco (UCL Great Ormond Street Institute of Child Health), said: "During clinical trials we have seen some very encouraging results in young patients with leukaemia, however it's still not clear why CAR T-cells continue to be present in the long-term for some patients, stopping the cancer from returning, while others remain at a high risk of relapse.

"To ensure that a leukaemia treatment works any CAR T-cell therapy must have a prolonged effect on the way that the body recognises and removes cancer cells. In this study we tried to find the origin and nature of the T-cells that control these long-term responses."

In CAR T therapy, immune cells (T-cells) are genetically engineered to contain a molecule called a chimeric antigen receptor (CAR) on their surface which can specifically recognise cancerous cells.

Researchers assessed the CAR T-cells of patients involved in the CARPALL Phase I Study, which used a new CAR molecule known as CAT-19 developed between UCL Cancer Institute and UCL Great Ormond Street Institute of Child Health, for treatment in children with acute lymphoblastic leukaemia (ALL).

The team compared CAR T-cells from patients who still had CAR T-cells detectable in the blood more than two years after their treatment, with individuals who had lost their CAR T-cells in the one to two months post treatment.

Using a technique called 'insertion site barcoding', researchers were able to study the fate of different types of CAR T-cells in patients after they were given.

Corresponding author Professor Persis Amrolia, based at UCL Great Ormond Street Institute of Child Health and Consultant in Bone Marrow Transplant at GOSH, said: "Using this barcoding technique, we were able to see 'stem cell memory T-cells' play a central role both during the early anti-leukaemic response and in later immune surveillance, where the body recognises and destroys cancer cells.

"This suggests that this small sub-group of T-cells are critical to the long-term success of the therapy."

Researchers say, this work indicates that the teams caring for patients could measure the types of CAR T-cells present after some someone has had their anti-leukaemia therapy, to gain an indication of whether they will be able to preserve their CAR T-cells into the future, avoiding relapse.

Dr Biasco added: "It was extremely rewarding to see how the application of our new barcoding technology to study CAR T-cells is unveiling such important information about what happens to these cells after they are given to patients. We now plan to expand the technology we established at UCL and validate these findings in larger groups of patients."

Co-author Dr Martin Pule, who develops CAR T therapies at his lab at UCL Cancer Institute, said: "This research opens up new avenues to improve CAR design and manufacture, improving the performance of CAR T-cell therapy, to achieve a combination of early tumour clearance and long-term protection from relapses in patients with B cell leukaemia."