How To Save Our Planet: The Facts

UCL Professor of Earth System Science Mark Maslin (UCL Geography) aims to arm everyone ‘from the pub to Parliament’ with facts from his new book on climate change so that we can act together to save the planet. 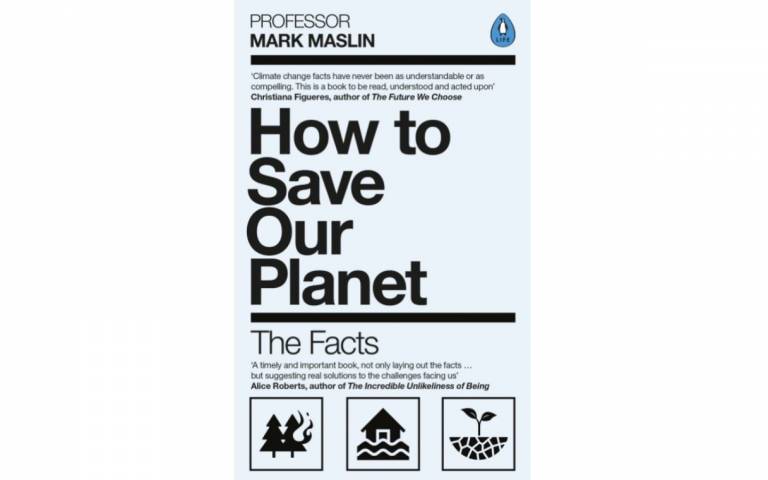 How to Save Our Planet: The Facts, published today (6 May 2021), is packed with easily digestible facts and figures on everything from the history of the Earth to the power of the individual and government solutions to tackle the climate crisis.

The book has already caught the attention of Virgin Radio DJ Chris Evans, who told Professor Maslin how both he and his children “love it!”

Interviewed by Chris on his breakfast radio show, Professor Maslin said: “I got really frustrated reading lots of these worthy books on climate change. The big, thick ones, the doom and gloom, and I have to confess that I’ve written a couple myself!

“I went, ‘How do I write something that my mates down the pub, or who I play football with, would want to read and actually get something out of?’ Suddenly, this book came to me, where I used single sentences, double sentences, and made it all very factual and hopefully really easy to read.

“You can dive into any chapter you want. You can read it backwards. It’s just more user-friendly than most other books.”

Professor Maslin is a global expert on climate science. He has a particular interest in understanding climate change historically as well as the major challenges it presents for humanity now and in the future.

Amongst the facts he finds most shocking in his book are:

Professor Maslin explained to BBC Radio 5Live’s Rick Edwards how the punchy, accessible format for his new book was inspired by the ancient Chinese military strategist Sun Tzu’s The Art of War:

“This book, is two-and-a-half thousand years old and the US Marine Corps and the British Army still use as their go-to text for how to run a war; it is full of bullet points like, ‘have more spies than the enemy.. do not attack unless you know you can win..’ really pithy things like that, and I thought, ‘Why don’t I just write a whole book like that?’”

The result: compelling content that Mark hopes will inform high quality debates on climate change everywhere from “Parliament, to dinner parties (if we’re ever allowed to have them again), the boardroom or the pub”.

On the idea that technology rather than behaviour shifts will save the planet, Professor Maslin told Rick Edwards: “What’s true is, it’s a bit of both. Technology will not fix this completely. One of the biggest things that people don’t realise is it’s our consumption – the amount of stuff that we actually buy, use and throw away. At the moment, we could not have all 7.8 billion people consuming the same amount as the average American. We just wouldn’t have any planet left!”

Every fact in the pocket-sized paperback is referenced, offering the reader a wealth of new information to explore and continue to learn from. It also lends itself to well informed posts on social media and fans are already sharing pictures of their favourite facts.

So, what are the things we can all do now to make a difference, Chris Evans asked Professor Maslin, after the Virgin Radio production team dubbed him ‘Mother Nature’s favourite son’!

“The first thing is to talk about it. It is the greatest threat to humanity and we all have a role to playing in fixing it. The second thing is we need to move to a more vegetable based diet, because it’s basically healthier for us but also helps to save the planet. And the other thing that everybody can do straight away is switch to a renewable energy tariff, because it’s probably the same price and is not going to cost you anything but sends a really big message to the energy companies that we want them to change. There are many more suggestions in the book”.

How to Save Our Planet: The Facts is published by Penguin UK.

How to Save Our Planet: The Facts – Penguin UK