A study led by UCL researchers has discovered that cells from different parts of kidney tumours behave differently and, surprisingly, cells within the centre of a tumour are the most aggressive and have the highest chance of spreading around the body. 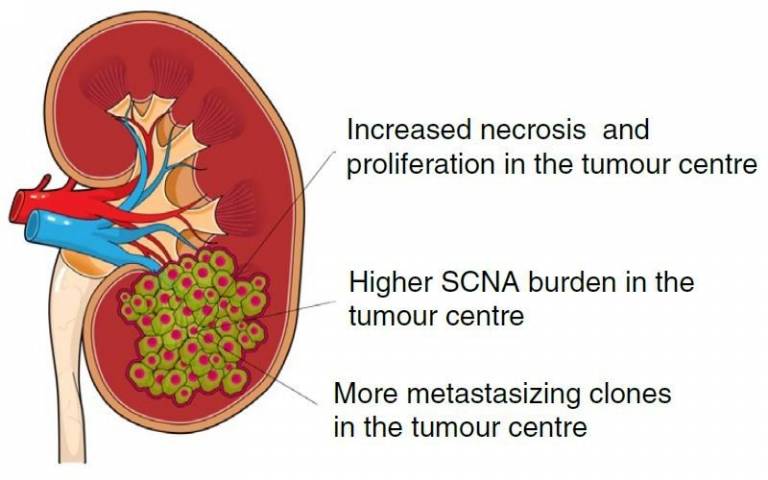 Cancers can spread to other parts of the body, with cells taking hold as secondary tumours which make the disease much harder to treat. Understanding the mechanics of this spread, a process called metastasis, could lead to new treatments that block this migration.

The researchers found that cells at the centre of tumours have a less stable genome and a higher potential to spread to secondary sites around the body. By contrast cells at the tumour edge had lower rates of metastasis, as well as lower rates of growth and genetic damage.

Co-lead author Dr Litchfield, Group leader at UCL Cancer Institute, said: “Cancer cells in the central zone of the tumour face harsh environmental conditions, as there’s a lack of blood supply and oxygen. They have to adapt to survive, which makes them stronger and more aggressive. This also means they are more likely to successfully evolve into cells that can disseminate and take hold in distant organs.”

The results highlight a need to pay close attention to the tumour centre to understand how cancer spreads and to find the cancer cells of greatest threat to the patient. It also shows the importance of developing treatments that target the unique environmental conditions found within the tumour core, in order to successfully eliminate the most aggressive tumour cells.

The researchers are now planning to reconstruct 3D tumour maps, which will provide an even clearer visualisation of the spatial patterns within tumours.

Dr Turajlic, head of the Crick’s Cancer Dynamics Laboratory, Consultant Medical Oncologist at the Royal Marsden NHS Foundation Trust, and the Chief Investigator of TRACERx Renal, said: “Cancer spread is one of the biggest barriers to improving survival rates. In the context of the TRACERx Renal study we previously resolved the genetic make up of different tumour areas, but until now, there has been no understanding of how these differences relate spatially. The most critical question is the part of the tumour from which cancer cells break away and migrate making cancer incurable.

“Using this unique clinical cohort and a multidisciplinary approach, including mathematical modeling, we identified with precision the place in the tumour where genetic chaos emerges to give rise to metastases. Our observations shed light on the sort of environmental conditions that would foster emergence of aggressive behaviour. These findings are a critical foundation for considering how we target or even prevent distinct populations of cells that pose the biggest threat.”

This study involve researchers at UCL, the Crick, The Royal Marsden, and Cruces University Hospital, Spain.