Source of hazardous high-energy particles located in the Sun

The source of potentially hazardous solar particles, released from the Sun at high speed during storms in its outer atmosphere, has been located for the first time by researchers at UCL and George Mason University, Virginia, USA. 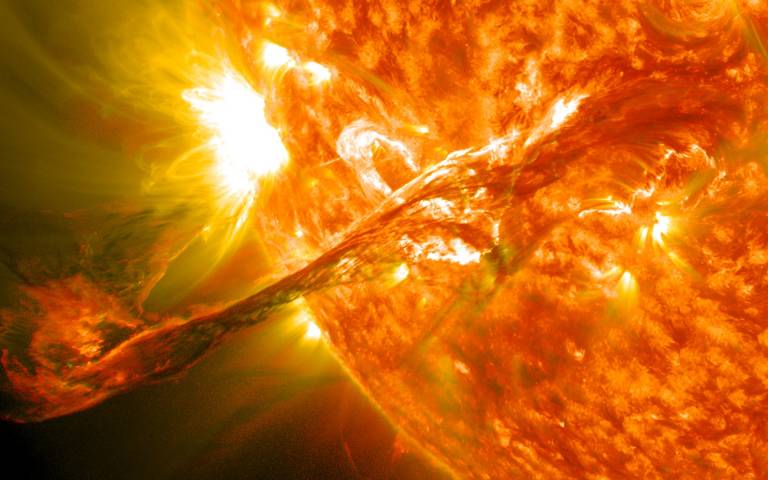 These particles are highly charged and, if they reach Earth’s atmosphere, can potentially disrupt satellites and electronic infrastructure, as well as pose a radiation risk to astronauts and people in airplanes. In 1859, during what’s known as the Carrington Event, a large solar storm caused telegraphic systems across Europe and America to fail. With the modern world so reliant on electronic infrastructure, the potential for harm is much greater.

To minimise the danger, scientists are seeking to understand how these streams of particles are produced so they can better predict when they might affect Earth.

In the new study, published in Science Advances, researchers analysed the composition of solar energetic particles heading towards Earth, and found they had the same “fingerprint” as plasma located low in the Sun’s corona, close to the middle region of the Sun’s atmosphere, the chromosphere.

Co-author Dr Stephanie Yardley (UCL Mullard Space Science Laboratory, MSSL) said: “In our study we have observed for the first time exactly where solar energetic particles come from on the Sun. Our evidence supports theories that these highly charged particles originate from plasma that has been held down low in the Sun’s atmosphere by strong magnetic fields. These energetic particles, once released, are then accelerated by eruptions that travel at a speed of a few thousand kilometres a second.

“Energetic particles can arrive at Earth very quickly, within several minutes to a few hours, with these events lasting for days. Currently, we can only provide forecasts of these events as they are taking place, as it is highly challenging to predict these events before they occur. By understanding the Sun’s processes better we can improve forecasts so that, when a major solar storm hits, we have time to act to reduce risks.”

Lead author Dr David Brooks (George Mason University and Honorary Associate Professor at UCL MSSL) said: “Our observations provide a tantalising glimpse into where the material that produces solar energetic particles comes from in a few events from the last solar cycle. We are now starting a new solar cycle, and once it gets going we will use the same techniques to see if our results are generally true, or if these events are somehow unusual.

“We are lucky in that our understanding of the mechanisms behind solar storms and solar energetic particles is likely to advance quickly over coming years thanks to data that will be gained from two spacecraft – ESA’s Solar Orbiter and the NASA Parker Solar Probe – that are heading closer to the Sun than any spacecraft has been before.”

In the study, researchers used measurements from NASA’s Wind satellite, located between the Sun and Earth, to analyse a series of solar energetic particle streams, each lasting at least a day, in January 2014. They compared this to spectroscopy data from the JAXA-led Hinode spacecraft. (The EUV Imaging Spectrometer onboard the spacecraft was built by UCL MSSL and Dr Brooks is a member of the mission’s Operations Team in Japan.)

They found that the solar energetic particles measured by the Wind satellite had the same chemical signature – an abundance of silicon compared to sulphur – as plasma confined close to the top of the Sun’s chromosphere. These locations were at the “footpoints” of hot coronal loops – that is, at the bottom of loops of magnetic field and plasma extending out into the Sun’s outer atmosphere and back again.

Using a new technique, the team measured the coronal magnetic field strength at these footpoints, and found it was very high, in the region of 245 to 550 Gauss, confirming the theory that the plasma is held down in the Sun’s atmosphere by strong magnetic fields ahead of its release into space.

The latest findings support the idea that some solar energetic particles originate from a different source than the slow solar wind (the origin of which is still debated), as they are confined in specific conditions in hot coronal loops at the core of the source region. A faster solar wind is emitted continuously by the Sun; its encounter with the Earth’s atmosphere can generate the Northern Lights. 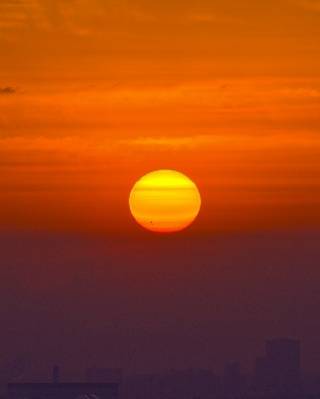 The high-energy particles released in January 2014 came from a volatile region of the Sun which had frequent solar flares and CMEs, and an extremely strong magnetic field. The region, known as 11944, was one of the largest active regions on the Sun at the time and was visible to observers on Earth as a sunspot – a dark spot on the surface of the sun (pictured left).

A strong radiation storm alert was issued at the time by the NOAA / NWS Space Weather Prediction Center but the solar energetic particle event is not known to have caused any disruption within the Earth’s atmosphere, although computer systems on the Hinode spacecraft itself recorded several particle hits.

A measurement was taken of the magnetic field strength within the region 11944 in a separate study shortly after this time-period, and was one of the highest ever recorded in the Sun – 8.2kG.

The researchers were funded by the NASA Hinode programme and UKRI.