Seagrass meadows are one of the world’s most efficient sinks of carbon and support 20% of the world’s biggest fisheries, but much of the UK’s seagrass has been lost since 1936, say PhD Candidate Alix Green and Dr Peter Jones (both UCL Geography). 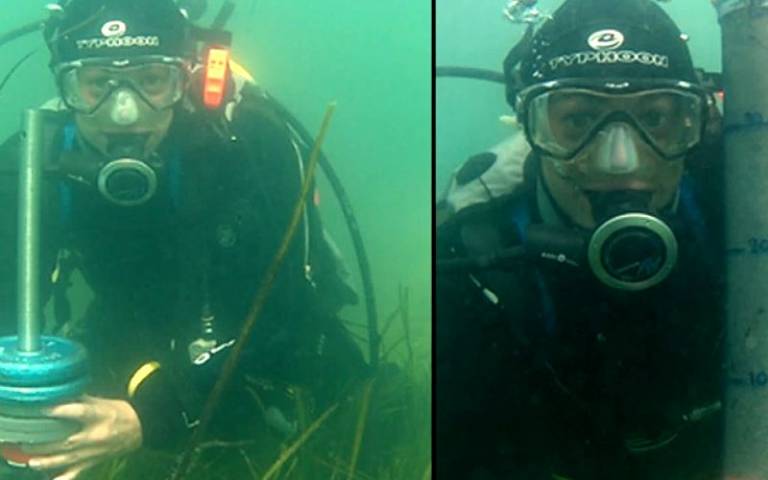 The native oyster beds are gone. The vast saltmarshes that soaked up carbon and buffered the coast from stormy seas have been reclaimed for farms and towns. The species-rich maerl and horse mussel beds have vanished and now, in new research, we’ve uncovered the decline of another jewel in the UK’s marine environment: seagrass meadows.

Seagrass is a flowering plant that forms rippling underwater meadows in shallow coastal seas. Our study is the first to analyse all published data on this habitat in the UK, gathered from newspapers, diaries and other sources throughout history. We found that at least 44% of the UK’s seagrass has been lost since 1936 – most of it since the 1980s. But when we modelled which coastal areas were likely to have been suitable for seagrass, we found that as much as 92% of it might have disappeared.

Thankfully, there are still 8,493 hectares (20,987 acres) of mapped seagrass in UK waters. That’s about the same size as Newcastle upon Tyne. But seagrass may have once covered 82,000 hectares of seabed – an area as large as 115,000 football fields. While we may never know exactly how much of the UK’s seabed was once covered by this habitat – old data sets are often light on detail and contain inaccuracies – we know these underwater meadows were vast. We can only imagine how their loss has transformed the country’s coastal seas.

Seagrass meadows are one of the world’s most efficient sinks of carbon and support 20% of the world’s biggest fisheries. We estimated that the UK’s meadows once stored 11.5 million tonnes of carbon, equivalent to the annual emissions of 7.7 million cars. With the destruction of the seagrass, much of that carbon has been added to the atmosphere and needs to be returned. These huge meadows could also have sheltered 400 million fish, and annually filtered pollution equivalent to the amount of urine produced by the entire population of Liverpool each year.

The first estimates of seagrass around the UK emerged in the 1930s. Descriptions and anecdotes suggest it was a common sight at the coast. Seagrass abounded in sheltered and protected spots, and there were plentiful populations in the lochs of Ireland and the west of Scotland.

Seagrass was considered so abundant in the 1860s that entrepreneurs writing in the Times of London described it as a potential cash crop that could rival imported cotton. While accurate data on the past size and extent of seagrass meadows is rare, the information we do have paints a picture of widespread loss. And these declines continue. The seagrass that has persisted is in a poor state – beset by pollution, coastal development, and disturbance from boating.

Seagrass losses were widespread from urban coastlines to remote estuaries. While huge areas of the Humber, the Essex and Suffolk estuaries lost seagrass, so did more rural locations on the east coast of Anglesey in Wales, the Cromarty Firth in Scotland, and the inlets and estuaries of Cornwall. Areas once covered by seagrass are now lifeless seabeds in many cases.

These losses have numerous and complex causes, but most involve poor water quality resulting from sewage discharges and nutrients running off farmland. Coastal developments – and mines in the past – have also polluted and disturbed seagrass.

A chance for renewal

Our findings should not inspire blame, though. They should highlight the massive opportunities in restoring these habitats. Reviving the UK’s seagrass meadows could help fight the climate emergency, rebuild wildlife populations and put beleaguered fisheries back on a path to productivity.

The tide is turning for some marine habitats in the UK. Work led by the WWF is replanting seagrass in West Wales, oysters are being laid in the Durnoch Firth and coastlines are being reshaped to encourage saltmarshes in Somerset. But these projects must aspire to a bigger vision of coastal biodiversity, mirroring achievements in the US. In Virginia, thousands of hectares of seagrass have been planted. This is the scale of ambition the UK needs.

The evidence of its decline is stark, but seagrass was once common throughout UK waters and could be again. The opportunity for the restoration of this vital habitat is immense.

This article was originally published in The Conversation on 04 March 2021.