A group of world-leading climate scientists are calling on global leaders to factor in the economic, environmental and humanitarian costs of failing to keep global warming below 1.5˚C this century, in a move led by experts from UCL, the University of Exeter and the ICCCAD. 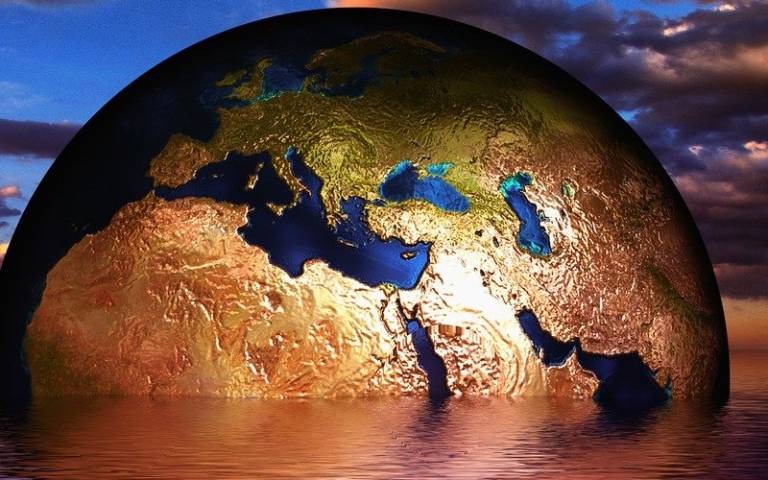 As the leaders of seven of the world’s wealthiest nations meet in Cornwall for the G7 summit, the scientists have launched a 1.5 Degree Charter to highlight how breaching the 1.5˚C target outlined in the Paris Agreement will cost far more than paying poorer nations to help global efforts to reach it.

It is hoped governments, businesses and the public will get behind the Charter to influence the conversation on climate finance and steer key decisions made at the next UN climate summit, COP26 in Glasgow in November.

Those most vulnerable to the impacts of the climate crisis predominantly live in the global South, but they have contributed the least to greenhouse gas emissions. The Charter argues that, to sufficiently reduce emissions, it will require richer countries to pay reparations to poorer countries. The amounts must reflect fairly the former’s responsibility for the crisis and the latter’s vulnerability to it.

The aim of the Charter therefore is to act as a catalyst to encourage wealthy nations to support those less wealthy to not only decarbonise but also ensure they can afford to put in place measures to protect their homes, jobs and lands from climate related impacts like extreme weather, poor health, job losses and food insecurity.

To support the Charter, the academics involved are developing a global research project to fully identify and compare the cost of exceeding a 1.5˚C temperature rise versus the costs already anticipated of the decarbonisation required to meet the 1.5C target.

The 1.5˚C Degree Charter calls on governments in particular to:

Professor of Global Change Science at UCL, Simon Lewis said: “This is about finding solutions to the climate crisis that embody fairness and build trust. Lower income countries did not create this problem, yet they are already paying for it with their livelihoods and increasingly their lives. It’s up to those who have contributed the most to the problem to address that injustice and build trust going forward. Solving the climate crisis means acknowledging the damage already caused and making new alternative plans and choices to reverse that tide.

“The global South has been a small part of the problem so far, but it’s a huge part of the solution. We need to demonstrate that the safety and security of its people are a priority. As with the pandemic, none of us is safe until we are all safe. Similarly, no country can fully protect against the impacts of climate change unless we are all protected against them.

“Stabilizing our climate requires emissions to drop to net zero. But building a prosperous and resilient world will require more than that, it will require increasing the power of the income poor and making investments to protect those who are already suffering the most through no fault of their own.”

Professor of Earth System Science at UCL, Mark Maslin, said:” The science is clear - going beyond 1.5˚C will increase human misery around the world and put a huge financial burden on all of us. Our Charter calls on the governments of the world to invest in dealing with climate change now, which will not only increase people’s health and well-being now but will save trillions of dollars.

“We call on everyone that cares about our planet to sign our Charter to show that citizens of the world want Governments, corporations and the wealthy to invest in dealing with climate change. The burden of saving our planet must fall on the wealthiest in our global society as they have contributed most to the problem through excessive consumption.”

Professor Tim Lenton, Director of the Global Systems Institute at the University of Exeter said: ““Global warming above 1.5C markedly increases the risk of crossing climate tipping points which will do greatest harm to the world’s poorest. Multiple abrupt climate changes occur between 1.5˚C and 2˚C global warming in IPCC climate model runs. Going to 2˚C warming risks a collapse of the West Antarctic ice sheet that would accelerate sea-level rise and threaten low-lying islands and coastlines such as Bangladesh. It would also degrade essentially all tropical coral reefs on which many depend for their livelihoods.”

“Going from 1.5˚C to 2˚C warming would put hundreds of millions of people – mostly in sub-Saharan Africa and the Indian subcontinent – outside of the climate ‘niche’ that supports high human population densities today and has done in the past. It would also greatly increase their exposure to life-threatening hot and humid climate extremes.”

Professor Saleemul Huq, Director of the International Centre for Climate Change and Development (ICCCAD) and Professor at the Independent University Bangladesh (IUB), said: “The concept of loss and damage from human induced climate change is closely connected to whether world leaders keep their commitment to remaining below 1.5 Degrees Centigrade or not. For every fraction of a Degree that the world goes above that threshold, the associated loss and damage will be exponentially worse and will fall mainly on the world's poorest communities in the poorest countries.”

Professor Mizan Khan, Deputy Director of the International Centre for Climate Change and Development (ICCCAD) and Programme Director of Least Developed Countries University Consortium on Climate Change (LUCCC), said: “We already live in a climate-changed world of 1.2˚C degrees higher temperature relative to pre-industrial levels. But with no ambitious mitigation around, adaptation finance to support the most impacted communities is woefully poor.  Against this, it is ironic that world military spending witnessed a hike, even in 2020, hitting the two trillion-dollar mark.”

Ashish Ghadiali, Activist-in-Residence at UCL’s Sarah Remond Centre for the study of Racism and Racialisation and a member of the co-ordinating committee of the COP26 civil society coalition, said: "The G7's announcements around digital taxation point to an appetite for innovation in finance that now urgently needs to be applied to the task of delivering climate justice as we approach COP26. As COP president, the UK government currently talks about the objective of coming good on past commitments of $100 billion a year. But these are (broken) promises that were made 12 years ago in Copenhagen. In the time that's elapsed, we've seen the impacts of climate breakdown incur costs related to loss and damage alone in excess of $150 billion a year.

“With rising global temperatures, the costs of climate breakdown are escalating and will continue to do so. The burden of these costs will fall hardest on those living on the frontlines of climate breakdown - those whose lives are already the most precarious and who are least responsible for creating climate change. It will also fall on our children, and on our children's children unless, collectively, we're able to achieve what we're setting out to achieve with this 1.5˚C charter - a paradigm shift in how we perceive our collective responsibility to steer a path towards a sustainable future."

The scientists and academics involved in creating the Charter hope that governments and organisations around the world will back it and use it as a tool to inform public and policy debates on climate finance. The ultimate aim is to create an international climate justice research network, connecting institutions in the global north and south, addressing the limitations of current climate finance strategies and collaborating to replace them with fair, workable alternatives, before it is too late.

The 1.5˚C Degree Charter is hosted on the UCL Climate Hub website.