Mass of human chromosomes measured for the first time

The mass of human chromosomes, which contain the instructions for life in nearly every cell of our bodies, has been measured with X-rays for the first time in a new study led by UCL researchers. 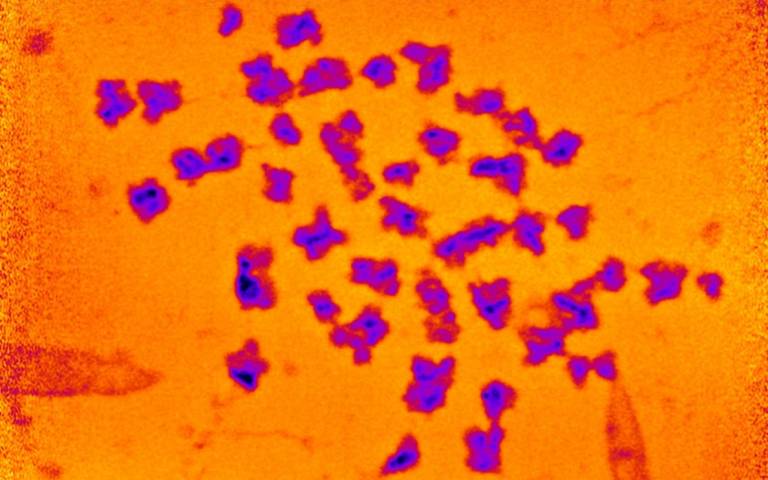 For the study, published in Chromosome Research, researchers used a powerful X-ray beam at the UK’s national synchrotron facility, Diamond Light Source, to determine the number of electrons in a spread of 46 chromosomes which they used to calculate mass.

They found that the chromosomes were about 20 times heavier than the DNA they contained – a much larger mass than previously expected, suggesting there might be missing components yet to be discovered.

As well as DNA, chromosomes consist of proteins that serve a variety of functions, from reading the DNA to regulating processes of cell division to tightly packaging two-metre strands of DNA into our cells.

Senior author Professor Ian Robinson (London Centre for Nanotechnology at UCL) said: “Chromosomes have been investigated by scientists for 130 years but there are still parts of these complex structures that are poorly understood.

“The mass of DNA we know from the Human Genome Project, but this is the first time we have been able to precisely measure the masses of chromosomes that include this DNA.

“Our measurement suggests the 46 chromosomes in each of our cells weigh 242 picograms (trillionths of a gram). This is heavier than we would expect, and, if replicated, points to unexplained excess mass in chromosomes.”

In the study, researchers used a method called X-ray ptychography, which involves stitching together the diffraction patterns that occur as the X-ray beam passes through the chromosomes, to create a highly sensitive 3D reconstruction. The fine resolution was possible as the beam deployed at Diamond Light Source was billions of times brighter than the Sun (ie, there was a very large number of photons passing through at a given time).

The chromosomes were imaged in metaphase, just before they were about to divide into two daughter cells. This is when packaging proteins wind up the DNA into very compact, precise structures.

Archana Bhartiya, a PhD student at the London Centre for Nanotechnology at UCL and lead author of the paper, said: “A better understanding of chromosomes may have important implications for human health.

“A vast amount of study of chromosomes is undertaken in medical labs to diagnose cancer from patient samples. Any improvements in our abilities to image chromosomes would therefore be highly valuable.”

Each human cell, at metaphase, normally contains 23 pairs of chromosomes, or 46 in total. Within these are four copies of 3.5 billion base pairs of DNA.