Lowering the carbon footprint of fabric and plastic manufacturing

Manufacturing of plastics and fabrics could become greener and have a lower carbon footprint, thanks to a new catalyst architecture developed by a team of experts including UCL academics. 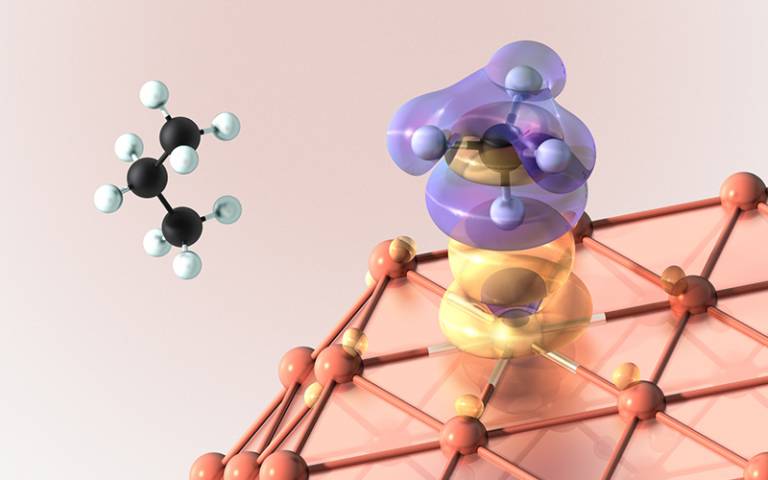 Propylene, produced from propane, is critical to the manufacture of plastics, fabrics and other chemicals, and is in short supply. Global demand is about 100 million metric tons per year, and its production involves the second largest conversion process in the chemical industry by scale. The most common method of producing propylene is steam cracking, which is one of the most energy intensive processes in the industry.

By-products from oil and gas operations are usually used to produce propylene, but the recent shift to shale gas has limited its production.

For the paper, published in Science, researchers at UCL, Tufts University, the University of Cambridge and the University of California at Santa Barbara used quantum chemical simulations run on supercomputers to predict the new catalyst architecture and its interactions with certain chemicals.

Through this they have demonstrated its ability to produce propylene. The developments have potential for highly efficient, greener chemistry with a lower carbon footprint.

Typical catalysts used to produce propylene from propane in shale gas are made up of combinations of metals that can have a complex, random structure at atomic level. The academics used single-atom alloy catalysts instead, which disperse single reactive metal atoms in a more inert catalyst surface. This enables a well-defined interaction between a single catalytic atom and the chemical being processed.

Lead author Professor Charles Sykes (Tufts University) explained: “We took a new approach to the problem by using first principles calculations run on supercomputers with our collaborators at UCL and Cambridge University, which enabled us to predict what the best catalyst would be for converting propane into propylene.”

Co-author Professor Michael Stamatakis (UCL Chemical Engineering) said: “Improvement of commonly used heterogeneous catalysts has mostly been a trial-and-error process. The single-atom catalysts allow us to calculate from first principles how molecules and atoms interact with each other at the catalytic surface, thereby predicting reaction outcomes. In this case, we predicted rhodium would be very effective at pulling hydrogens off molecules like methane and propane – a prediction that ran counter to common wisdom but nevertheless turned out to be incredibly successful when put into practice. We now have a new method for the rational design of catalysts.”

Not only are single-atom alloy catalysts more efficient, but they tend to run reactions under milder conditions and lower temperatures, requiring less energy than conventional catalysts. They can be cheaper to produce as they require only a small fraction of reactant metals like platinum or rhodium. The new rhodium/copper single-atom alloy catalysts are also resistant to coking, which is where soot builds up on the surface of the catalyst and inhibits the required reactions.

Professor Sykes added: “This work further demonstrates the great potential of single-atom alloy catalysts for addressing inefficiencies in the catalyst industry, which in turn has very large economic and environmental payoffs.”