Biodegradable microspheres can be used to deliver heart cells generated from stem cells to repair damaged hearts after a heart attack, according to new findings by UCL researchers. 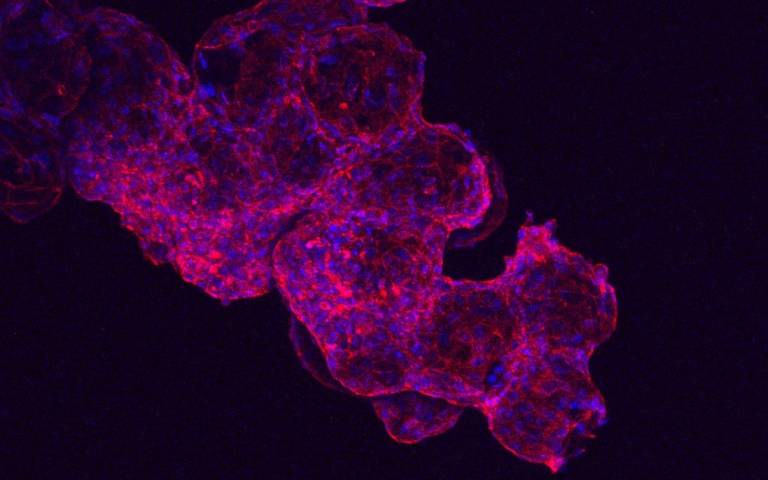 This type of cell therapy could one day cure debilitating heart failure, which affects an estimated 920,000 people in the UK and continues to rise as more people are surviving a heart attack than ever before.

Scientists have been trying to use stem cells to repair damaged hearts for a number of years. However, these cells often don’t remain in the heart in a healthy state for long enough to provide a sustained benefit.

Now, a UCL team, funded by the British Heart Foundation (BHF), has grown human stem cell-derived heart cells on tiny microspheres, each only a quarter of a millimetre wide, engineered from biological material. The cells attach to and grow on the microspheres, make connections with each other and are able to beat for up to 40 days in a dish. The small size of the microspheres means they can be easily injected into the heart muscle using a needle.

The researchers have also taken this one step further by developing state-of-the-art technology to visualise the injected microspheres and confirm they remain in place. Barium sulphate (BaSO4), which shines bright on X-rays and CT scans, was added to the microspheres and injected into rat hearts. Whole body CT scans confirmed that the microspheres remained in place for up to 6 days after injection.

The researchers say this technology could provide the next generation of materials to effectively deliver new cells to failing hearts to restore their function, and hope it will be tested in human clinical trials in the next 10 years. They presented their findings at the British Cardiovascular Society Conference.

Dr Daniel Stuckey, leader of cardiac imaging at the UCL Centre for Advanced Biomedical Imaging, said: “To truly mend broken hearts, it is important that stem cells are delivered in a way that allows them to survive within their new environment and turn into heart muscle cells. Our technology provides a new way of ensuring that the cells injected into the heart are working as they should. We hope this research will give us the information essential for making stem cell therapy a realistic treatment for people with heart disease.

PhD student Annalisa Bettini (UCL Institute of Cardiovascular Science), who led the study, said: “We can do even more with this technology - as well as developing heart injections, we are developing these traceable microspheres to act as heart patches that can be simply injected to the particular area of heart damage. In the future, these could provide cardiologists with a number of solutions to provide the best treatment for their patients.”

Professor Metin Avkiran, Associate Medical Director at the British Heart Foundation, said: “This is a promising new delivery system that could give stem cell-derived heart cells the best chance of repairing damaged hearts. After a heart attack, heart muscle tissue becomes damaged and has a limited ability to heal itself, increasing a person’s chance of developing heart failure.

“Breakthroughs like this bring us closer to finding much-needed cures for heart failure and provide light at the end of the tunnel for the hundreds of thousands of people living with this debilitating condition.”