This week we meet Professor Ruben Saakyan, experimental particle physicist at the Department of Physics and Astronomy. Here, he chats to us about his new project in which he will be using recent breakthroughs in quantum technologies to attempt to weigh the neutrino particle. 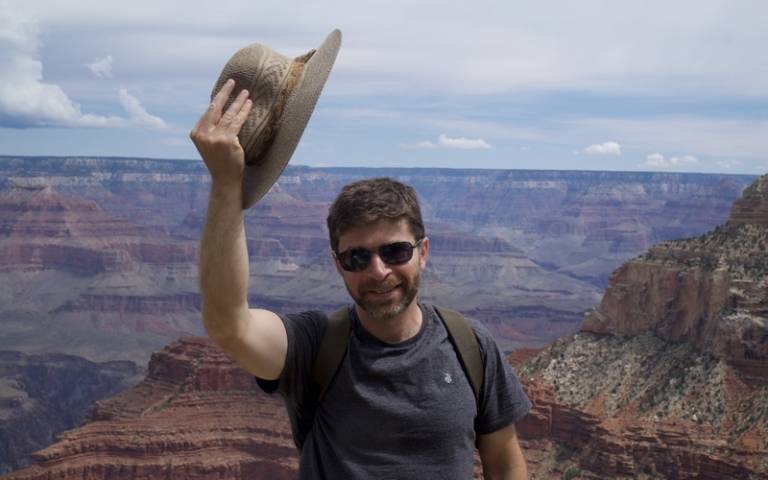 I am an experimental particle physicist at the Department of Physics and Astronomy. The focus of my research is on understanding the properties of neutrinos – the smallest yet most abundant particle of matter in the universe. Their role in answering many of the universe’s most important questions is hard to overestimate, from understanding complex processes that power stars to the preponderance of matter over antimatter to which we owe our very existence. And there are plenty of questions about neutrinos waiting to be uncovered that require innovative experiments.

I have been at UCL for over 20 years now, arriving as a postdoctoral fellow after completing my PhD. I did my PhD work in Italy, at the Gran Sasso National Laboratory.

A couple of measurements related to neutrino properties that may not have made public headlines (partly because they are not easy to explain) but form a backbone of the scientific progress in physics. More recently, a recent award to carry out a project that will allow us to address neutrino physics in a very different and highly innovative way (see answer to next question).

We have been awarded a grant for a project that will attempt to weigh the neutrino in a laboratory environment. Neutrinos are millions of times lighter than electrons and although we know they weigh something, nobody so far has managed to find out how much. Perhaps surprisingly, answering this question is key to our understanding of the origin of matter and the early evolution of the universe. We will use recent breakthroughs in quantum technologies to attempt to do something that so far seemed impossible. The methods and tools that we will develop for this experiment are as important as the result itself because they have the potential to revolutionise how we do experimental particle physics in the future.

Album: Innuendo by Queen;
Film: La vita e bella (Life is Beautiful);
Novel: The Master and Margarita by M. Bulgakov is one of them.

All mushrooms are edible. Some are only edible once.

Don’t give up chess!

I cannot ice skate (despite being brought up in Russia).

There are a few. Grand Canyon is one of them.