A UCL-led dementia prevention programme which helped older adults make lifestyle changes to support their health in a pilot study, is now recruiting hundreds of people with memory problems to take part. 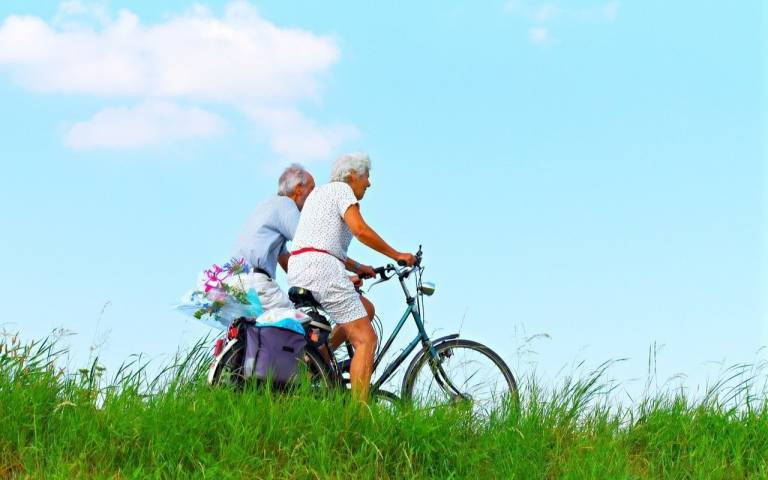 The programme involves people taking part in 10 video calls to learn as a group how to make changes that could reduce their dementia risk, such as increasing physical activity, reducing smoking, taking care of their general health and doing more engaging activities.

Participants from the pilot found the group dynamic helpful as they supported each other in achieving their goals.

The group intervention was developed as part of APPLE Tree (Active Prevention in People at risk of dementia through Lifestyle, bEhaviour change and Technology to build REsiliEnce), a £3.9m ESRC/NIHR-funded programme which aims to impact the half of older people (aged 60+) who have problems with cognition (memory, orientation and other thinking), and therefore a greater chance of developing dementia.

Simple lifestyle and behaviour interventions may be able to delay or even prevent the onset of dementia, prolonging independent living, and increasing quality of life.* These include:

For the pilot programme, 12 participants were invited to 10 group Zoom calls, between July and September 2020, to plan lifestyle changes they could make to reduce dementia risk. They attended over 80% of sessions, and met 4/5 of the goals they set themselves, according to the findings now published in Dementia.

Most participants had not used video-calling before. The sessions were facilitated by graduate mental health workers from UCL, with a facilitator from a third sector charity. Facilitators were not from clinical backgrounds and received a short training course and regular supervision from a clinical psychologist. This means that if the groups reduce dementia risk, they can be made widely available.

The study’s lead author, Professor Claudia Cooper (UCL Psychiatry), said: “When the face-to-face groups we designed could not go ahead, we explored how to provide the intervention to people in their own homes, during the pandemic.

“Facilitators helped participants set up Zoom, and organised food deliveries so groups could try out new recipes and share healthy foods, over Zoom. The Covid-19 pandemic reduced access to social activities and routine healthcare that are central to dementia prevention, so strategies to bring dementia prevention to people at risk are needed now more than ever. Our programme supports the current priority for prevention in NHS services – dementia prevention is hugely important for society, as dementia has no known cure.”

Participants said they valued the social support the calls provided. Celina Ho, a London resident in her 60s who participated in the pilot, says the programme was helpful in encouraging her to make lifestyle changes that she wouldn’t otherwise have made, which she hopes will help her to stay healthy.

Celina said: “I knew what I needed to do to take care of my health, but I wasn’t actively doing everything I could be doing. By working as a group with this programme, I learned from other people and was encouraged to do more for my own health. I learned that my local council has classes that I’ve now started taking, for computing and cycling, and I’ve also started eating a healthier diet.”

Co-author Dr Marina Palomo (Camden and Islington NHS Foundation Trust), a clinical psychologist who led the co-production process, commented: “We co-produced the APPLE-Tree intervention with a broad coalition of people with lived experience of memory concerns, from third sector, NHS and academic organisations. This group helped us develop our approach, which focuses on groups learning from and respecting each other’s experience and trying new things in a supportive environment. They also helped us decide how to present dementia prevention advice, which is based on best available current evidence.”

The intervention also includes internet resources. Last year, an APPLE-Tree Hackathon was held to develop an app to support lifestyle change, and the winner’s newly developed product is part of the intervention.

Professor Cooper explained: “We used results from this pilot study to plan our randomised controlled trial with over 700 participants, to test whether the APPLE-Tree intervention reduces their risk of dementia over two years. To our knowledge, this is the first trial of a dementia prevention intervention delivered by non-clinically trained staff, so if it works, it will be potentially accessible to many people who are at increased risk of dementia. We have learned from large trials globally, in particular the FINGER trial in Finland, which have shown that lifestyle interventions can delay dementia.”

The larger trial is now underway with over 100 participants, and the researchers are continuing to recruit more people with mild memory problems. The programme is still delivered remotely, but when social distancing guidelines allow, the team plans to introduce blended remote/face-to-face delivery.