SARS-CoV-2 mutations similar to those in the B1.1.7 UK variant could arise in cases of chronic COVID-19 infection, where treatment over an extended period provides the virus multiple opportunities to evolve, finds research co-led by UCL. 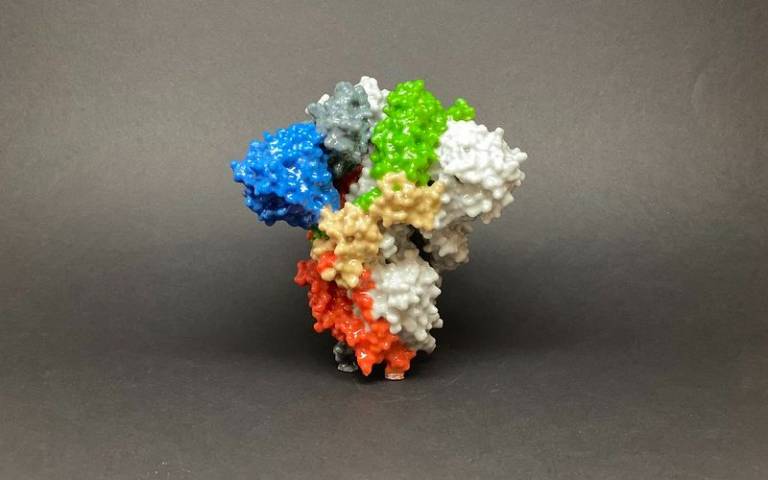 Writing in Nature, a team led comprised of researchers from UCL and Cambridge reported how they were able to observe SARS-CoV-2 mutating in the case of an immunocompromised patient treated with convalescent plasma. After documenting the mutations arising in the patient, careful tracking of the global prevelance of other mutations led to the discovery of what was recently identified as the new variant that led to the UK being forced once again into strict lockdown, though there is no suggestion that the variant originated from this patient.

Dr Steven Kemp (UCL Infection & Immunity), who first noticed a series of linked mutations occurring in a national database of SARS-CoV-2 sequences reported his findings to Professor Ravi Gupta (University of Cambridge), who then led a team of UCL and Cambridge Scientists to create a synthetic version of the virus Spike protein in the lab. The team showed that specific changes to its genetic code – the mutation seen in the B1.1.7 variant – made the virus twice as infectious on cells as the more common strain.

SARS-CoV-2, the virus that causes COVID-19, is a betacoronavirus. Its RNA – its genetic code – is comprised of a series of nucleotides (chemical structures represented by the letters A, C, G and U). As the virus replicates itself, this code can be mis-transcribed, leading to errors, known as mutations. Coronaviruses have a relatively modest mutation rate at around 23 nucleotide substitutions per year.

Of particular concern are mutations that might change the structure of the ‘spike protein’, which sits on the surface of the virus, giving it its characteristic crown-like shape. The virus uses this protein to attach to the ACE2 receptor on the surface of the host’s cells, allowing it entry into the cells where it hijacks their machinery to allow it to replicate and spread throughout the body. Most of the current vaccines in use or being trialled target the spike protein and there is concern that mutations may affect the efficacy of these vaccines.

UK researchers within the COVID-19 Genomics UK (COG-UK) Consortium have identified a particular variant of the virus that includes important changes that appear to make it more infectious: the ΔH69/ΔV70 amino acid deletion in part of the spike protein is one of the key changes in this variant.

Although the delta H69/V70 deletion has been detected multiple times, until now, scientists had not seen them emerge within an individual. However, in a study published today in Nature, UCL infectious diseases researcher Dr Kemp and Cambridge Professor Ravi Gupta documented how these mutations appeared in a COVID-19 patient admitted to Addenbrooke’s Hospital, part of Cambridge University Hospitals NHS Foundation Trust.

The individual concerned was a man in his seventies who had previously been diagnosed with marginal B cell lymphoma and had recently received chemotherapy, meaning that that his immune system was seriously compromised. After admission, the patient was provided with a number of treatments, including the antiviral drug remdesivir and convalescent plasma – that is, plasma containing antibodies taken from the blood of a patient who had successfully cleared the virus from their system. Despite his condition initially stabilising, he later began to deteriorate. He was admitted to the intensive care unit and received further treatment, but later died.

During the patient’s stay, 23 viral samples were available for analysis, the majority from his nose and throat. These were sequenced as part of COG-UK. It was in these sequences that the researchers observed the virus’s genome mutating.

Between days 66 and 82, following the first two administrations of convalescent sera, the team observed a dramatic shift in the virus population, with a variant bearing ΔH69/ΔV70 deletions, alongside a mutation in the spike protein known as D796H becoming dominant. Although this variant initially appeared to die away, it re-emerged again when the third course of remdesivir and convalescent plasma therapy were administered.

Professor Ravi Gupta from the Cambridge Institute of Therapeutic Immunology & Infectious Disease, who led the research, said: “What we were seeing was essentially a competition between different variants of the virus, and we think it was driven by the convalescent plasma therapy.

“The virus that eventually won out – which had the D796H mutation and ΔH69/ΔV70 deletions – initially gained the upper hand during convalescent plasma therapy before being overtaken by other strains, but re-emerged when the therapy was resumed. One of the mutations is in the new UK variant, though there is no suggestion that our patient was where they first arose.”

Under strictly-controlled conditions, the researchers created and tested a synthetic version of the virus with the ΔH69/ΔV70 deletions and D796H mutations both individually and together. The combined mutations made the virus less sensitive to neutralisation by convalescent plasma, though it appears that the D796H mutation alone was responsible for the reduction in susceptibility to the antibodies in the plasma. The D796H mutation alone led to a loss of infection in absence of plasma, typical of mutations that viruses acquire in order to escape from immune pressure.

The researchers found that the delta H69/V70 deletion by itself made the virus twice as infectious as the previously dominant variant. The researchers believe the role of the deletion was to compensate for the loss of infectiousness due to the D796H mutation.  This paradigm is classic for viruses, whereby escape mutations are followed by or accompanied by compensatory mutations.

“Given that both vaccines and therapeutics are aimed at the spike protein, which we saw mutate in our patient, our study raises the worrying possibility that the virus could mutate to outwit our vaccines,” added Professor Gupta.

“This effect is unlikely to occur in patients with functioning immune systems, where viral diversity is likely to be lower due to better immune control. But it highlights the care we need to take when treating immunocompromised patients, where prolonged viral replication can occur, giving greater opportunity for the virus to mutate.”

Co-author Dr Steven Kemp (UCL Infection & Immunity) said: “We first noticed a series of mutations occurring together in a large number of submitted sequences. When several mutation occur together, it is likely that they are being transmitted on single viruses, and so can have public health implications if a particular variant becomes dominant in the population.”

The research was largely supported by Wellcome, the Medical Research Council, the National Institute of Health Research, and the Bill and Melinda Gates Foundation.