Professor Andrew Coates (UCL Space & Climate Physics) explains how the Perseverance rover will land on Mars, a risky process made harder by the fact that it must be done completely autonomously. 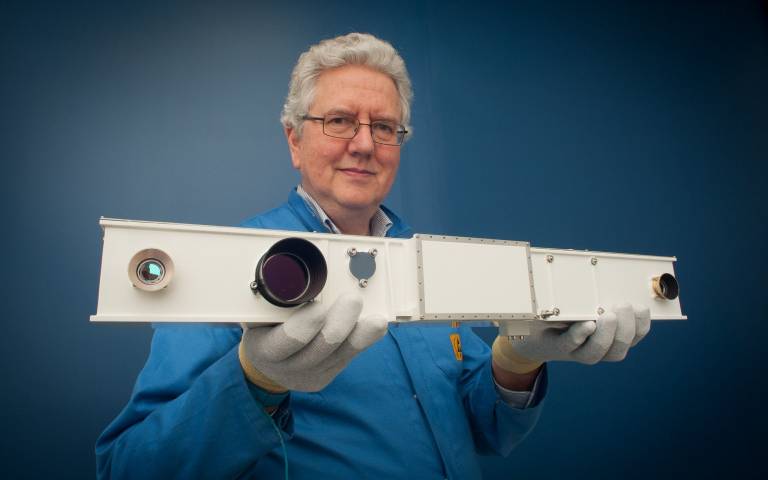 Following “seven minutes of terror” after it reaches Mars’ upper atmosphere, Nasa’s Perseverance rover is expected to land on the surface of the red planet at 20:55 GMT on February 18. This is incredibly hard to do, with only about 40% of missions succeeding.

As a member of the team that built the European Space Agency’s Rosalind Franklin rover (we made the PanCam, the camera “eyes” of the rover), which will set off for Mars next year, I will be holding my breath during the landing. There’s so much at stake. Not only could the mission unveil some of Mars’ best-kept secrets, and be a key part of future exploration to return a Mars sample back to Earth, it could also have important lessons for landing Rosalind Franklin.

The appropriately named Perseverance soared into the Florida morning sky on an Atlas V rocket on July 30 2020, in the midst of a global pandemic for Earthlings. This was the start of a nearly 500 million kilometre journey to the red planet, with the car-sized rover, and a helicopter called Ingenuity, aboard.

Its destination is the Jezero crater – a 45km-wide basin, with an old, dry river delta, cliffs, dunes and boulder fields - where it will search for signs of ancient, primitive life on the martian surface. Of course it’s not impossible it could find current life too, if there is any. Perseverance will also collect samples that another mission will retrieve and return to Earth in the late 2020s. This will be the first attempt to take off from the surface of another planet.

The reason it is hard to land on Mars is that the atmospheric pressure is so low that spacecraft move through it at enormous speeds unless they are slowed down. What’s more, the landing has to be done autonomously, without real-time contact with Earth. The landing sequence for Perseverance is an improved, more accurately targeted version of the “Skycrane” technique, which safely landed Nasa’s Curiosity rover in 2012.

The “seven minutes of terror” will start at 20:48 GMT when a protective “aeroshell” containing Perseverance, Ingenuity and a descent vehicle called “Skycrane” enters the Mars atmosphere at 19,500 km/h. Just over a minute later, the aeroshell will reach its maximum outer temperature, 1,300°C, due to friction with the upper atmosphere. Luckily, the front of the aeroshell is a protective heat shield.

At 20:52, a 21.5-metre parachute will deploy, and the heat shield will be ejected. Two minutes later, the back part of the shell will separate too. The Skycrane, descending at 2.7 km/h and powered by eight throttleable retrorockets, will then lower the rover on 7.6m nylon cords, from about 20m above the ground. When its speed has slowed down to 2.5km/h and the rover touches the surface, the cords will be severed. At 20:55 GMT Perseverance should land while Skycrane flies off into the sunset to a safe distance.

Although Skycrane has been used before, features known as “Range Trigger” and “Terrain-Relative Navigation” have been added this time as the landing terrain is much less flat. Range Trigger determines the deployment time for the parachute based on the rover’s position with respect to the target landing area, which is ten times smaller than Curiosity’s. The Terrain Relative Navigation initially uses radar and later live images of the surface to determine the best, precise landing site within a 600 metres range.

Safely on the ground, Perseverance can begin its mission. The first 30 “sols” (a sol is a Mars day - 23 hours, 39 minutes and 40 seconds) on Mars will be used for initial commissioning, including checkouts of the science instruments and short test drives. The next up to 30 sols will be used for test flights of the Ingenuity helicopter. Following this, the surface operations of the rover can begin.

In addition to cameras, radars and other instruments, the rover has a drill to collect samples, up to 6cm long, from rocks or soil. These will be analysed right away to search for signs of life, or collected in one of 38 metal tubes for later return to labs on Earth. This will provide a key step in Mars exploration, as much more detailed analysis can be done in labs on Earth. What’s more, we will know the detailed context of the samples, unlike for the Mars meteorites we have already.

We are also keenly looking forward to the launch of the Rosalind Franklin rover (ExoMars 2022) at the next launch opportunity, currently September 21 2022 – with landing expected on June 10 2023. We will be closely monitoring the landing of Perseverance as we too will use an aeroshell for descent, along with two parachutes and a retrorocket-powered landing platform called Kazochok. One of the parachutes is 35m in diameter, making it the largest to be sent to Mars ever.

Rosalind Franklin will be the first to drill up to two metres under the harsh, freezing Martian surface, which is bombarded by harmful radiation, to retrieve samples from below. If there is any life on Mars, it is more likely to survive below the surface. The rover will visit an even older site with evidence of past water, Oxia Planum. These deep samples will be analysed in the rover, with the results radioed back to Earth.

Some of our PanCam team members and other ExoMars scientists will also participate in the Perseverance and Hope missions, and we are lucky to have the opportunity to learn what we can from all of these missions ahead of our own – both in planetary mission operations and in science. The search for past or even present life on Mars is beginning in earnest, and it’s a truly international endeavour.