Rapid immune response in children protects them from Covid-19

Fundamental differences in the immune response of adults and children can help to explain why children are much less likely to become seriously ill from SARS-CoV-2, finds a new study by researchers at UCL and the Wellcome Sanger Institute. 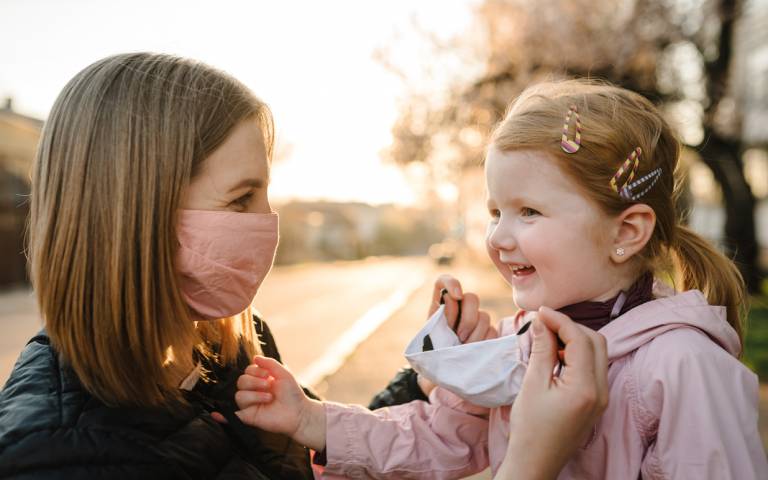 The study, published in Nature, is the most comprehensive single-cell study to compare SARS-CoV-2 infection in adults and children across multiple organs. Researchers found that a stronger ‘innate’ immune response in the airways of children, characterised by the rapid deployment of interferons, helped to restrict viral replication early on. In adults, a less rapid immune response meant the virus was better able to invade other parts of the body where the infection was harder to control.

As part of the Human Cell Atlas* initiative to map every cell type in the human body, the findings will be a valuable contribution to predict personal risk from SARS-CoV-2. A nasal swab to measure the immune response in newly infected adults could be used to identify those at higher risk who may be candidates for pre-emptive monoclonal antibody treatment. Recent research has also suggested inhalation of interferons could be a viable therapy**.

The immune system we are born with is not the same as the one we have as adults. The ‘innate immune system’ of children is better able to recognise dangerous viruses or bacteria automatically, triggering ‘naïve’ B and T cells that can adapt to the threat. Adults have a more ‘adaptive’ immune system containing a huge repertoire of ‘memory’ B and T cell types, which have been trained through past exposure to respond to a particular threat. Though the adult immune system also has an innate response, it is more active in children.

One of the key mechanisms of both immune systems is a group of proteins called interferons, which are released in the presence of viral or bacterial threats and tell nearby cells to tighten their defences. Interferons are proteins with strong anti-viral activity and their production will typically lead to the activation of B and T cells, which kill infected cells and prevent the pathogen from spreading further.

For this study, researchers at UCL and affiliated hospitals*** collected and processed matched airway and blood samples from 19 paediatric and 18 adult COVID-19 patients with symptoms ranging from asymptomatic to severe, as well as control samples from 41 healthy children and adults.

Single-cell sequencing of the samples was done at the Wellcome Sanger Institute to generate a dataset of 659,217 individual cells. These cells were then analysed, revealing 59 different cell types in airways and 34 cell types in blood, including some never previously described.

Analysis showed that interferons were more strongly expressed in healthy children compared to adults, with a more rapid immune response to infection in children’s airways. This would help to restrict viral replication early on and give children an immediate advantage in preventing the virus from infecting the blood and other organs.

First author Dr Masahiro Yoshida (UCL Division of Medicine) said: “Because SARS-CoV-2 is a new virus, it isn’t something that the adaptive immune system of adults has learned to respond to. The innate immune system of children is more flexible and better able to respond to new threats. What we see at a molecular level are high levels of interferons and a very quick immune response in children that helps to explain why they are less severely affected by COVID-19 than adults.”

The study also detailed how the immune system of adults, with its high numbers of ‘killer’ immune cells such as B and T cells, can work against the body once SARS-CoV-2 has spread to other parts of a patient.

Senior author, Dr Marko Nikolić (UCL Division of Medicine), said: “Compared to children, adult blood has a greater number and variety of cytotoxic immune cells, which are designed to kill infected cells to prevent an infection spreading. But it is a fine line between helping and hindering. Once the virus has spread to several areas of the body, organ damage can be caused by the immune system trying and failing to control the infection. Our study shows that not only do children respond better initially, if the virus does enter the blood the cytotoxic response is less forceful.”

Knowing exactly how and why the immune response to SARS-CoV-2 can fail to control the infection or start to harm the body provides scientists with the means to start asking why certain individuals may be at greater risk of serious illness.

In addition, there is growing evidence of the therapeutic benefits of inhaled interferon beta 1a and based on the study results this should be particularly the case for patients with weak or absent interferon activation.

Dr Kerstin Meyer, a senior author of the study from the Wellcome Sanger Institute, said: “To put it simply, the innate immune response is better at fighting COVID-19 and children have stronger innate immunity, but immunity is also a complex ballet involving many types of cells. The timing and the types of cells that are triggered will influence how an infection develops, and this will vary between individuals for all sorts of reasons in addition to age. Some of the differences we observe between children and adults may help us to think about how we gauge personal risk for adults as a way of mitigating serious illness and death.”

Jonah Cool, Program Officer for Single-Cell Biology at the Chan-Zuckerberg Initiative, said: “The results are insightful not only for addressing COVID-19, but more broadly for understanding changes in the airway and blood throughout childhood. They demonstrate the power of single-cell resolution to reveal differences in the biology of children and adults, while pointing to very different considerations when thinking about how a specific disease arises and may be treated.”

**Research published in the Lancet