Researchers from UCL and the University of Bristol have used cutting-edge techniques to digitally reconstruct the skull of one of the earliest limbed animals, revealing how it would have bit into its prey. 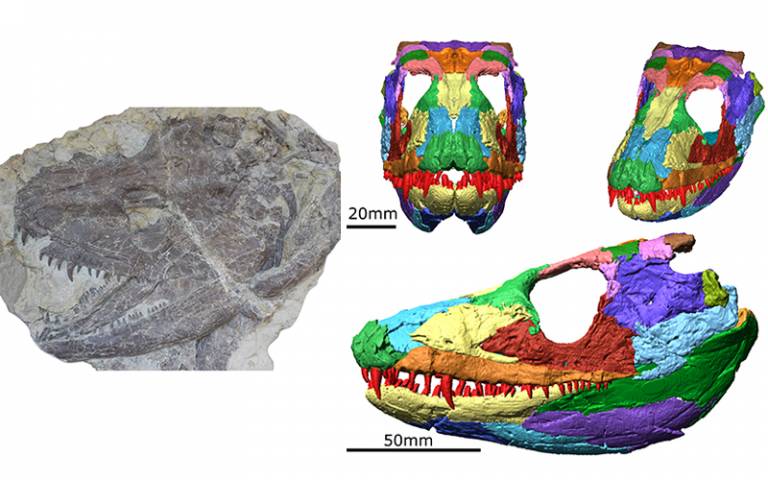 The study, which was recently published in the Journal of Vertebrate Paleontology, depicts the reconstructed skull of a prehistoric amphibian, the 340-million year old Whatcheeria deltae, to reveal what this animal looked like and how it may have fed.

First discovered in Iowa in 1995, the fossils of Whatcheeria were originally squashed flat after being buried by mud at the bottom of an ancient swamp, but palaeontologists were able to use computational methods to restore the bones to their original arrangement. The fossils were put through a CT scanner to create exact digital copies, and software was used to separate each bone from the surrounding rock. These digital bones were then repaired and reassembled to produce a 3D model of the skull as it would have appeared while the animal was alive.

The authors found that Whatcheeria possessed a tall and narrow skull quite unlike many other early tetrapods that were alive at the time.Tetrapods include mammals, reptiles and amphibians - everything from salamanders to humans. Their origin represents a crucial time in animal evolution, from the development of limbs with digits and the shift from water on to land.

Lead author James Rawson (University of Bristol) said: “Most early tetrapods had very flat heads which might hint that Whatcheeria was feeding in a slightly different way to its relatives, so we decided to look at the way the skull bones were connected to investigate further.”

By tracing the connecting edges of the skull bones, known as sutures, the authors were able to figure out how this animal tackled its prey. Co-author Professor Emily Rayfield (University of Bristol) said: “We found that the skull of Whatcheeria would have made it well-adapted to delivering powerful bites using its large fangs.”

Co-author Dr Laura Porro (UCL Cell & Developmental Biology) said: “There are a few types of sutures that connect skull bones together and they all respond differently to various types of force. Some are better at dealing with compression, some can handle more tension, twisting and so on. By mapping these suture types across the skull, we can predict what forces were acting on it and what type of feeding may have caused those forces.”

The authors found that the snout had lots of overlapping sutures to resist twisting forces from struggling prey, while the back of the skull was more solidly connected to resist compression during biting.

Mr Rawson added: “Although this animal was still probably doing most of its hunting in the water, a bit like a modern crocodilian, we’re starting to see the sorts of adaptations that enabled later tetrapods to feed more efficiently on land.”