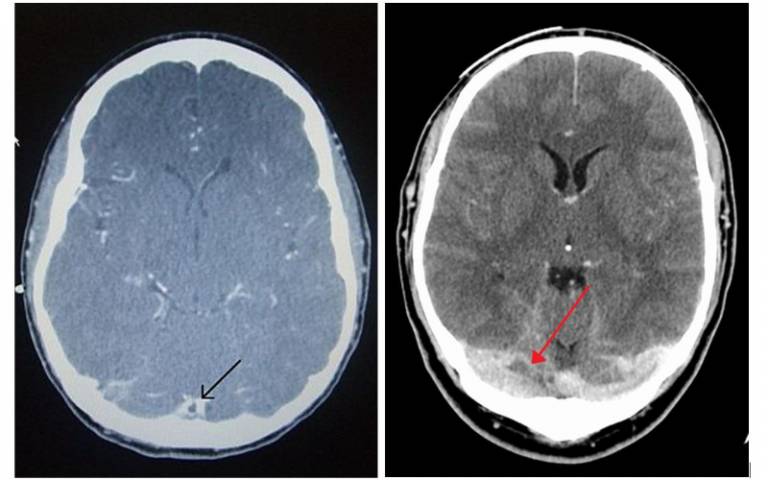 The research, published in The Lancet, is the most detailed account of the characteristics of CVT, when it is caused by the novel condition vaccine-induced immune thrombotic thrombocytopenia (VITT).

VITT is a condition characterised by a blockage of the veins and a marked reduction of platelets, blood components which are an important part of the blood clotting system. The commonest and severest manifestation of VITT is CVT, in which veins draining blood from the brain become blocked.

This new study looks in detail at 70 patients with VITT-associated CVT following vaccination are compared to 25 with CVT without evidence of VITT.

The authors suggest that some treatments such as intravenous immunoglobulin seem to be associated with better outcomes but caution against reading too much into the findings of the observational study, saying that reliable evidence about treatments can only be obtained in a randomised clinical trial.

The NHS’s success with the vaccination programme makes the UK a very good place to study rare side-effects of COVID-19 vaccination. The authors started collecting their cases within a few weeks of the discovery of this new condition and submitted their report within two months of it being reported in the medical literature.

This poorer outcome is explained at least in part because the abnormal blockage of veins is much more extensive in this condition, with more veins blocked both in the head and elsewhere in the body.

Lead author, Dr Richard Perry, consultant neurologist at the National Hospital for Neurology and Neurosurgery and Module Convenor for the Stroke Medicine MSc at UCL Queen Square Institute of Neurology, said: “With an illness of such severity, often in young patients who were previously fit and well, doctors have been desperate for evidence regarding treatments that might prevent some of the death and disability that arises from this condition.

“While an observational study is not the ideal platform to provide evidence for which medications work, it may be a long time before we have evidence from randomised clinical trials, the gold standard for testing new treatments. For the moment we are dependent on observational studies like CAIAC for our evidence.”

The study provides support for the three principles of treatment established so far by the Expert Haematology Panel, based on early work at UCLH and two other European sites:

Co-author, Professor David Werring (UCL Queen Square Institute of Neurology) said: “Although this syndrome has previously been reported, this multicentre UK-wide study is the most detailed description to date of the clinical and radiological features, which should help clinicians to recognise and treat it promptly.”

Co-author Marie Scully, a Professor of Haemostasis and Thrombosis at UCL Institute of Cardiovascular Science and UCLH consultant haematologist, said: “Tempting though it might be to replace the platelets that are missing in this condition by infusing new platelets from blood donors, we do not advise this approach. However, it is difficult in cases requiring neurosurgical interventions and in such situations they are required to prevent bleeding.  Presumably, the reason why the numbers of platelets in the bloodstream is so low in VITT is because they are quickly used up by the abnormal clotting. Infusing more platelets may simply add more fuel to the fire.”

Co-author, Christine Roffe, Professor of Stroke Medicine at Keele University, said “Although there are sound theoretical reasons supporting the adoption of these treatment strategies, until now there has been no clinical evidence for their use. In our study, non-heparin blood thinners and intravenous immunoglobulin were both associated with better patient outcomes, providing the first clinical evidence from a large case series in support of these treatments.”

Dr Alastair Webb, consultant neurologist at the John Radcliffe Hospital in Oxford said: “We found that those patients who were given intravenous immunoglobulin – the treatment in which the body is flooded with normal antibodies to try to reduce the effects of the abnormal one – were more likely to leave hospital alive and able to live an independent life rather than depending on carers or family to look after them.

“Use of non-heparin blood thinners was similarly associated with a more favourable outcome. Our data does not prove that these treatments work, as the most severely affected patients may have been too unwell to receive them in time, but the results support their use whilst we seek better evidence,” he said.

On the other hand, platelet transfusions were associated with a worse outcome in patients with VITT-associated CVT. Although observational data cannot prove harm from this treatment approach, the study provides support for the concern that has already been raised about the potential harm of platelet transfusions.

Although VITT-associated CVT is a severe condition, it appears to be extremely rare and the authors stress that, for most individuals, the risk to their health of not getting vaccinated against COVID-19 is likely to be much higher.