Congratulations to PhD student Annalisa Bettini (UCL Institute of Cardiovascular Science) who has been named one of the winners of a national science image competition run by the British Heart Foundation (BHF). 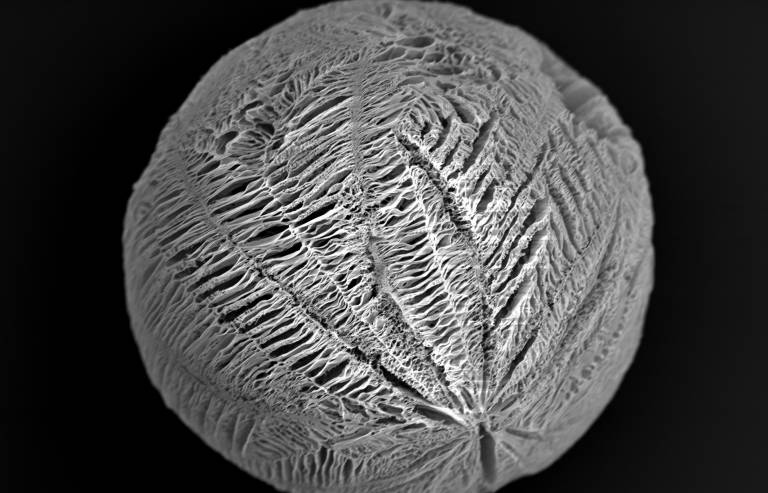 The annual ‘Reflections of Research’ contest allows art and science to collide, as BHF-funded scientists are encouraged to showcase their research on heart and circulatory disease through captivating pictures.

Annalisa’s entry, “Biodegradable microspheres for healing hearts”, was taken as part of her PhD research at UCL.

And, out of the 11 shortlisted images, the astounding picture has been voted the Supporters’ Favourite, following a vote on the BHF’s Facebook page.

Speaking of her achievement, Annalisa said: “I am honoured to have been voted the Supporters’ favourite for the British Heart Foundation’s annual Reflections of Research science image competition.

“As scientists, it is important that the public that fund our research can visualise what we do in the lab. By winning the competition, we are bringing awareness to the multidisciplinary nature of our research, and how as scientists we can use creative approaches and new technology to address important issues.”

Annalisa’s image shows a tiny microsphere made from biodegradable material, that is just a quarter of a millimetre wide.

The state-of-the-art technology can be used to deliver heart cells generated from stem cells to repair damaged hearts after a heart attack.

This type of cell therapy could one day cure debilitating heart failure, which affects an estimated 920,00 people in the UK and continues to rise as more people are surviving a heart attack than ever before.

Annalisa explained: “The image was taken using scanning electron microscopy in the UCL Institute of Archaeology Wolfson Science Laboratories. The high magnification image shows the surface topography of the biomaterial that is used to attached cells to.

“I have been fabricating the microspheres as part of my PhD project, which is focusing on how to improve the attachment and delivery of stem cells and cardiomyocytes (heart muscle cells) derived from stem cells that can be used to regenerate the failing heart.”

For years researchers have been investigating stem cells as a treatment for heart failure to try to restore its function. However, they’ve found that the cells don’t stick or survive in the heart long enough to provide any benefit.

However, the human stem cells which are grown on the microspheres make connections with each other and are able to beat for up to 40 days in a dish.

Their small size also means that they can be easily injected into the heart muscle using a needle.

Annalisa said: “The use of cell therapy for cardiac regeneration has attracted much interest. However, many challenges remain. These include trying to localise cells to the site of injury, as cells are rapidly lost from the site of injection and improving cell viability after transplantation into the harsh environment in the failing heart.”

It is hoped that the research will be tested in human clinical trials in the next 10 years.

The Judge’s Winner of the BHF competition came from the Dr Elisa Avolio, a Post-Doctoral Research Associate at the University of Bristol.

The structures were created using a mixture of two types of heart cells – cardiac endothelial cells, which line the inside of every blood vessel, and pericytes, which “hug” the outside of blood vessels to support the vessel and help it function.

This knowledge could be used in the future to develop new treatments for patients after a heart attack.