We are saddened to hear of the death of David Bowles, former Vice-Provost, who worked at UCL from 1970–1996. 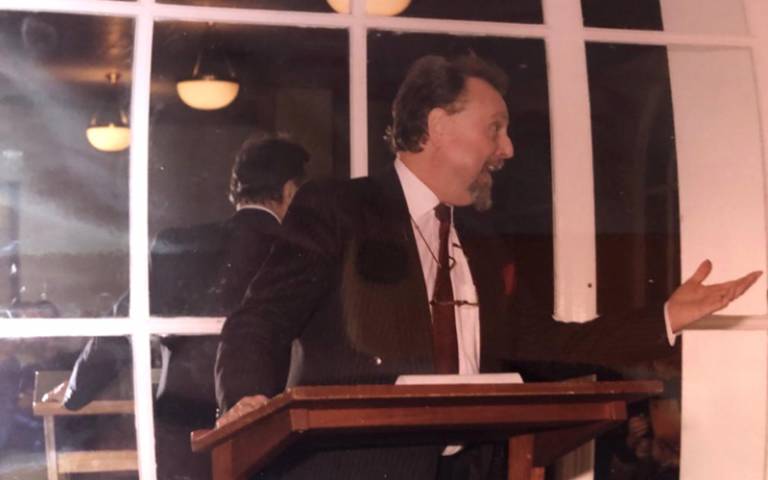 David was born in Hampstead, north-west London, into a close-knit and loving family when World War II and its aftermath of austerity dominated the lives of everyone in Britain. Upon returning to London from Bournemouth, where he had been evacuated during the Blitz, his quick mind, love of literature and theatrical talent won him a scholarship to Marylebone Grammar School – the first in his family to attend such an establishment. Upon leaving school he took a job as an articled clerk at a chartered accountancy firm to support his family, but in the course of time realised his ambition of getting a degree in English Literature by studying at Birkbeck during nights, even when he was working for his accountancy papers by day.

In 1970 David joined UCL from Middlesex Hospital Medical School, as an officer in the Finance Department. His analytical mind, keen eye for detail and diligence ensured the upward trajectory of his career; in 1978 he became Finance Secretary and Accountant and was promoted to Director of Finance and Planning in 1989. In the 1980s, with the then Provost Sir James Lighthill, he played a major role in reorientating more equitably the way the University Grants Committee’s grant was distributed to the colleges of the federal University of London.

In 1991 David became an Honorary Fellow of UCL and was promoted to Vice-Provost, a move that was considered unusual at a time when this role had traditionally been taken up by a member of academic staff. During his time as Vice-Provost he was responsible for setting the financial strategy for the institution and did much to ensure that UCL was on a sound financial footing, including advising government on Higher Education finance policy.

David’s contemporaries at UCL remember a generous, gregarious and knowledgeable colleague, much admired and respected for his “staff-first” approach to all of his roles – an approach exemplified when he gave up his office to accommodate two new staff members joining the team who had nowhere to sit! He made numerous lifelong friends from across the university, sharing his love of travelling (particularly exploring in a VW camper van) and doing his best to ensure that colleagues were also bitten by the motorhoming bug.

He was a familiar face in the Housman room at lunchtimes, and he helped to establish the Professors’ Dining Club (of which he was to become an enthusiastic member). He was also involved in the work of UCL’s Crabtree Foundation, dedicated to researching and publicising the life and work of the poet and polymath Joseph Crabtree (1754–1854).

David held the position of Vice-Provost until his early retirement in 1996 although he continued to work for UCL as a consultant until 2001. In retirement he continued to pursue his interests of literature, theatre and travel – falling in love with New Zealand, which he continued to visit for over a decade – and exercised his literary talents to write a novel, Recovery Position. He remained an ardent and very knowledgeable football fan; his clubs were Brighton and Hove Albion and Fulham where for many years he was a season-ticket-holder.

David is survived by his children Hamish and Sarah, grandchildren Billy and Sid, his widow Marion Bowles and her children Paul, Lynne, and Richard.

Image: David Bowles at his retirement in 1996; photo kindly supplied by Marion Bowles