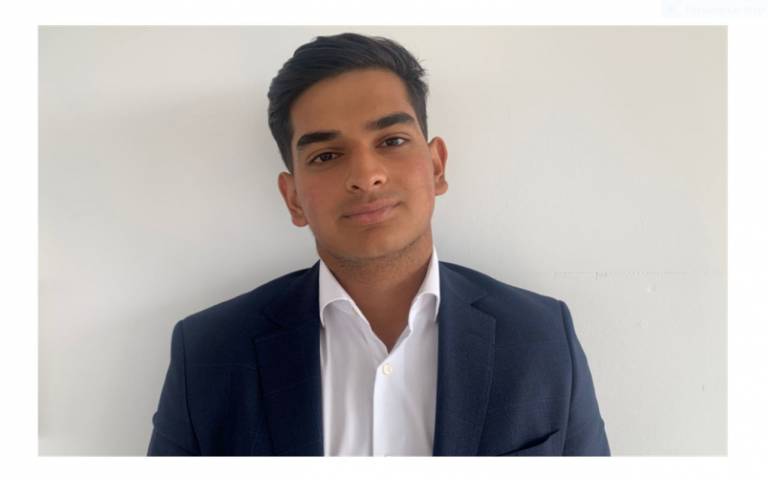 Zak, who started the network from scratch in March last year after helping neighbours who were shielding and seeing a wider need for this kind of support, has been honoured with a Points of Light award from the Prime Minister – an award recognising outstanding volunteers in the UK.

Zak, who started his LLB in September, initially set up a Facebook group which gained 1,000 members in three days. As the number of volunteers grew, Zak managed the network and co-ordinated deliveries through dozens of WhatsApp groups, working 12 hours a day.

He also partnered with AFC Wimbledon Fans, securing a £10,000 grant to supply and deliver laptops and tablets to digitally excluded children.

In a Facebook video series profiling people who have used digital tools to make a difference to their communities, Zak said: “We raised over £22,000, delivered thousands of items to local food banks and the NHS, and delivered over 56 laptops to children in need.
“And I couldn’t have done it without the support of thousands of members of Merton, who really did put in their all.”

In addition to the Points of Light award, Zak was named a Make a Difference Hero by BBC Radio London after being nominated by Merton Borough Council. Mark Allison, the leader of the council, said: “By organising a small army of volunteers in our community, he showed great leadership, empathy, and tenacity.

“These are admirable traits for anyone to hold, but when you consider that Zak was just 18 at the time, you start to realise just how special he is.”

The Points of Light awards were established in the UK in 2014, adopting a practice started by the White House in 1990 of celebrating outstanding volunteers who have made a difference to their communities.

The Prime Minister, Boris Johnson, wrote to thank Zak, saying he was “particularly inspired” to hear about the partnership with fans of AFC Wimbledon delivering laptops to children in need.

Writing about the rewarding nature of the work, Zak told UCL Laws earlier this year: “I've always enjoyed chatting to and helping elderly people and it was amazing to speak to people that I would never otherwise have had a chance to in my life and make a profound difference to their lives.

“It's also so pleasing to look back in fond recollection of the many people I worked with who voluntarily gave their time and effort to help their neighbours. It really inspired me to be the best person I could be and help others.

He added: “One thing that surprised me was that I was never looked down on based on my age. I joined council meetings, spoke to people in their 90s, and worked with thousands of people but not once did others dismiss my views because of my age. This really encouraged me to work hard, unimpeded from criticism.”