Climate change is already widespread, rapid, and intensifying, according to a new report released today by the UN’s Intergovernmental Panel on Climate Change (IPCC), involving contributions from UCL academics. 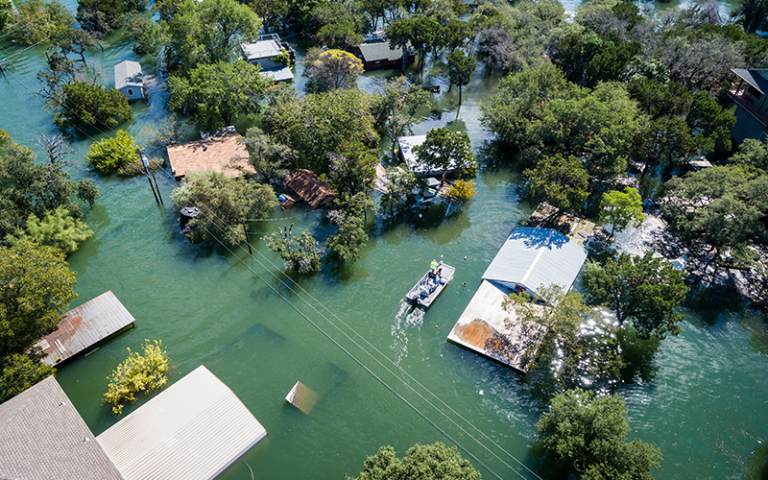 The report, which assesses the physical science behind climate change, highlights that changes in the Earth’s climate have already been observed in every region of the globe and across the whole climate system – including the atmosphere, oceans, rivers and lakes, and land – many of which are unprecedented.

It also highlights that limiting warming to close to 1.5°C or 2°C will be impossible without immediate, rapid and large-scale action to reduce levels of carbon dioxide (CO2) and other greenhouse gas emissions.

Published ahead of November’s UN Climate Change Conference in Glasgow, COP26, the report is the first of three volumes from IPCC Working Groups to be released over the next eight months, providing a collective view of the latest science on climate change as agreed by 195 member governments of the IPCC.

UCL Professor of Earth System Science Mark Maslin (UCL Geography) said: “This report is a scientific and political wake-up call for all governments of the world to take climate change seriously. It acts as a reminder of the urgency of the climate crisis. Governments must now work in solidarity, taking heed of this report and increasing their ambitions to ensure we can avoid the worst of climate change, adapt to its impacts, and protect our most vulnerable populations.

“The science in this report must inform the firm pledges, commitments and binding agreements made at COP26 later this year, helping ensure we can halve global emissions by 2030 and hit net zero by 2050 to limit warming to 1.5˚C.”

Comprising 12 chapters exploring different aspects of climate science, Climate Change 2021: The Physical Science Basis involved hundreds of scientists from around the world - including three from UCL - who assessed evidence from over 14,000 scientific publications.

Dr Chris Brierley (UCL Geography), a contributor to Chapter 3 on ‘Human Influence on the Climate System’, said: “Previous reports have clearly highlighted the urgency of the issue – but since then, we’ve learnt even more about the science behind climate change. It’s now more important than ever that we both adapt to the climatic changes we’re already experiencing and rapidly put new systems in place that mean we can stop burning fossil fuels, which are the key cause of this warming.”

PhD student Anni Zhao (UCL Geography) also contributed to Chapter 3, stating: “Using the latest climate models together with updated paleo record and observations, we were able to update our assessment of human influence on the climate system since the last IPCC reports. We found that human influence is more clearly linked to changes in global sea level rise, ocean heat content and subsurface ocean salinity, as well as changes in rainfall, snow cover and atmospheric circulation.”

Previously, it was thought that global warming amplified existing variations in precipitation with wet areas becoming wetter and dry areas becoming drier. This assumption has been found to be invalid so that the impact of climate change on where and when rain or snow will fall is even more uncertain than previous assessments had claimed.

There is, however, a clear consensus that global warming intensifies precipitation, resulting in fewer but heavier rainfalls and snowfalls. The hydrological consequences include reduced soil moisture as well as an increased frequency and severity of floods and droughts.

These changes have vital repercussions for global food and water security. The report also provides evidence of potential ‘silver lining’ to this transformation in precipitation. Replenishment of groundwater, the world’s largest distributed store of freshwater, is often found to occur disproportionately from heavy rainfalls.

Professor Taylor said: “The intensification of precipitation brought about by climate change, which is most pronounced in the tropics, is observed to enhance groundwater recharge in many environments. In a warming world, groundwater therefore could become a logical source not only to enable adaptation to increased freshwater demand for irrigated agriculture but also to sustain drinking-water supplies.”

The latest volume is one of eight reports released during the sixth IPCC assessment cycle (2015 – 2023) - the most ambitious to date. These include three Special Reports (1.5 Degrees, Climate and Land, and The Ocean), the three IPCC Working Group contributions (WGI: The Physical Science Basis, WGII: Impacts, Adaptation and Vulnerability (report due in February 2022), WGIII: Mitigation of Climate Change (report due in March/April 2022)), a refinement to its latest Methodology Report, and a final Synthesis Report building on the findings from all the reports in this cycle, due in September 2022.

The reports aim to help policymakers understand what scientists know about climate change, provide the most up to date knowledge to address issues related to climate change, and form the scientific basis to inform climate change policies - as well as the UN Sustainable Development Goals. They are considered an important resource for society, domestic policymaking, and global climate negotiations, including November’s COP26.