Hidden air pollutants on the rise in India and UK

Levels of air pollutants in cities in India and the UK are on the rise, according to a new study led by UCL and the University of Birmingham. 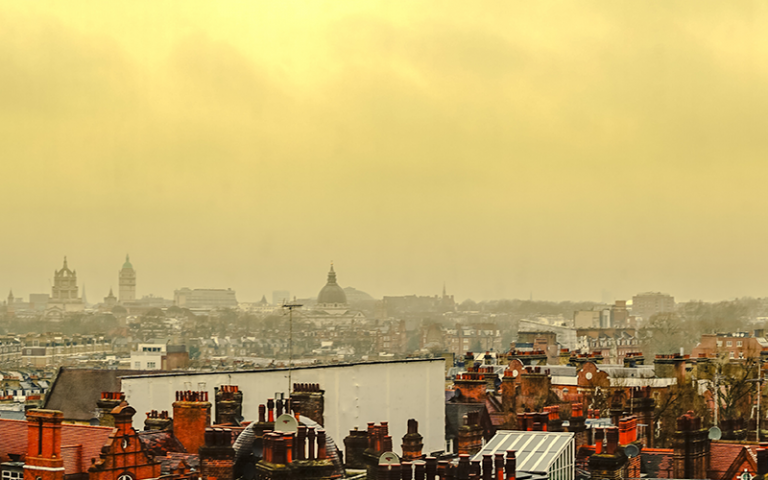 Published today in the journal Atmospheric Chemistry and Physics, researchers analysed satellite data to estimate trends in a range of air pollutants for 2005 to 2018. They targeted four cities at distinct development stages and at various stages of implementing air quality policy: London and Birmingham in the UK and Delhi and Kanpur in India.

The international team of scientists from Belgium, India, Jamaica and the UK found increases in PM2.5, fine particles that are the leading contributor to premature death from exposure to air pollution, and nitrogen dioxide (NO2) in Kanpur and Delhi. The increases in PM2.5 in Kanpur, identified by the World Health Organization (WHO) as the most polluted city in the world in 2018, were both significant and substantial, at 3.1% per year. The researchers speculate that these increases are due to increasing vehicle ownership and industrialisation.

The researchers also found increases in the air pollutant formaldehyde. Formed from chemicals collectively known as non-methane volatile organic compounds or NMVOCs, formaldehyde is an ideal marker for NMVOCs emissions. NMVOCs are emitted from many sources in cities, including vehicles, solvents, building materials, adhesives, and household and personal care products - and interact with other chemicals to form PM2.5 and ozone. A significant rise in formaldehyde was detected in Delhi, with a recent sharp increase in London of 9% per year from 2012 to 2018.

The researchers suggest that vehicle emissions of NMVOCs are contributing to the rise in formaldehyde levels in India, whilst NMVOCs emissions from the food and beverage industry, personal care and cleaning products and a range of other household sources could be responsible for the increase seen in the UK’s capital, as cars are relatively small sources of NMVOCs due to air quality policies in place in the UK.

In London, levels of PM2.5 and NO2 were found to be decreasing, whilst all air pollutants included in the study were found to be in decline in Birmingham. For both cities, the declines in NO2 and PM2.5 were significant, with the researchers noting that this reflects the success of policies targeting these emissions sources.

This is in stark contrast to Kanpur and Delhi, where increases in these pollutants indicates that air pollution policies and mitigation measures - including the roll out of controls in the industrial and transport sectors - are having a limited effect.

The researchers highlight the importance of satellite data from space-based instruments in helping derive long-term pollution trends to monitor emissions and inform policies to reduce pollution, with their results confirming that vigilance and urgent action are needed across the globe to reduce air pollution levels.

Conceptual study lead and Associate Professor Dr Eloise Marais (UCL Department of Geography) said: “There is more than a decade of freely available observations from instruments in space to monitor and assess air quality in cities throughout the world. Greater use of these in the UK, India, and beyond is paramount to successful air quality policies.

“Measures to tackle pollution take time, so a long and consistent record of observations is vital for assessing the success or inadequacies of current mitigation measures. The mix of pollutants in cities that contribute to poor air quality changes over time in response to population changes, air quality policies, prevalence of new sources, and the chemical composition of the atmosphere. Satellite observations offer the advantage of tracking these seemingly invisible pollutants.”

Karn Vohra, study lead author and PhD student (University of Birmingham), said: “We wanted to demonstrate the utility of satellite observations to monitor city-wide air pollution in the UK where ground-based measurements are in abundance and in India where they are not. Our approach will be able to provide useful information about air quality trends in cities with limited surface monitoring capabilities. This is critical, as the WHO estimates that outdoor air pollution causes 4.2 million deaths a year.”

Study co-author Professor William Bloss (University of Birmingham) said: “We were surprised to see the increase in formaldehyde above Delhi, Kanpur and London – a clue that emissions of other volatile organic compounds may be changing, potentially driven by economic development and changes in domestic behaviour.  Our results emphasise the need to monitor our air for the unexpected, and the importance of ongoing enforcement of measures for cleaner air.”