This week we speak to Simon, Head of Coordination for the Sustainable Development Goals (SDGs) at UCL. Simon tells us about the importance of the SDGs, the varied roles he's had at UCL, and the time he turned down the chance to interview one of Britain's biggest bands... 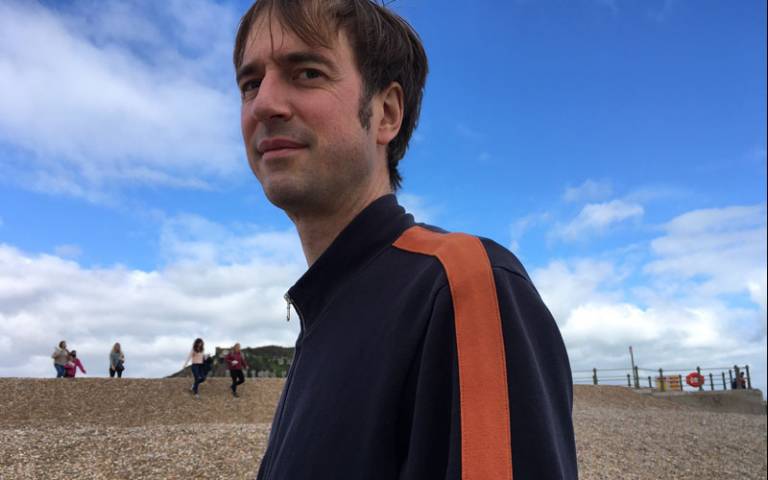 I am working with colleagues across UCL to develop and implement an institution-wide initiative to maximise our impact on the UN’s Sustainable Development Goals (SDGs), across our teaching, research, student activities, operations and public engagement.

The SDGs are 17 Goals agreed by UN Member States in 2015 to provide a framework for promoting sustainable development: the need for ongoing economic growth while responding to the different acute challenges facing the planet.

Universities can play an essential part in responding to these challenges. The new initiative is exploring how UCL can continue playing a leading role in these efforts, and through doing so help to make the world a better place.

Before this role, I worked in UCL’s Sustainability team and prior to that I managed communications for CLOSER, a research unit in the UCL Institute of Education.

However, my first period at UCL was in the 1990s, as a student in UCL Geography, a sabbatical officer for UCL’s student union, and working in the Development Office, a forerunner of OVPA. In all, I’ve spent more than 13 years in and around UCL.

Between these two periods I left for a few years to see some of the ‘outside world’, including working for the Olympic Delivery Authority (ODA) on the London 2012 Games.

At the ODA, I created and edited ‘Park Life’, the monthly newspaper for the Olympic Park construction site, which was produced to inspire and engage the 10,000-strong workforce and to convey vital health and safety information. Going by the construction industry average statistics, six people should have been killed in the course of building the Olympic Park and venues. In fact, no one died. I like to think I played a small part in that achievement.

As the first step in UCL’s SDG initiative, I’m currently identifying the many ways our staff and students are already supporting the SDGs through their research, teaching, public engagement or operational activities. You can suggest how your work is contributing to the Goals using this online form.

Album: Bobbie Gentry’s ‘The Delta Sweete’, and the latest albums by Slowthai and Fontaines D.C. are currently on rotation on Spotify, but my favourite of all time is ‘Pod’ by The Breeders.

Film: ‘After Hours’, a black comedy by Martin Scorsese.

Book: I’m currently enjoying ‘Prisoners of Geography: Ten Maps That Tell You Everything you need to Know about Global Politics’ by Tim Marshall.

Why did George Michael have chocolate on his T-shirt? He was careless with his Wispa

I turned down the opportunity to interview Oasis for UCL’s student magazine in 1994 before the release of their first album. I didn’t rate their first single and thought they would quickly fade away.

Take a year out to visit more of the world, which I regret not having done. And interview Oasis if you ever get the chance.