Global animal populations have on average declined by two-thirds in less than half a century, according to the WWF’s Living Planet Report 2020 involving UCL researchers, released today. 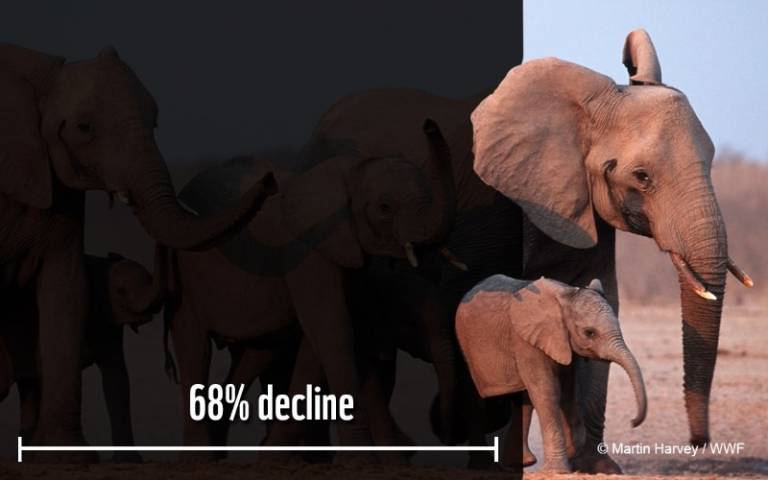 The Living Planet Index (LPI), provided by the Zoological Society of London (ZSL), shows that factors believed to increase the planet’s vulnerability to pandemics such as COVID-19 - including land-use change and the use and trade of wildlife - were also some of the drivers behind the 68% average decline in global mammal, bird, amphibian, reptile and fish populations between 1970 and 2016.

The report presents a comprehensive overview of the state of the natural world through the LPI, which tracks trends in global wildlife abundance, and contributions from more than 125 experts from around the world. It shows that the main cause of the dramatic decline in species populations on land observed in the LPI is habitat loss and degradation, including deforestation, driven by how we as humanity produce food.

Endangered species captured in the LPI include the eastern lowland gorilla, whose numbers in the Kahuzi-Biega National Park, Democratic Republic of Congo have seen an estimated 87% decline between 1994 and 2015 mostly due to illegal hunting, and the African grey parrot in southwest Ghana, whose numbers fell by up to 99% between 1992 and 2014 due to threats posed by trapping for the wild bird trade and habitat loss.

The LPI, which tracked almost 21,000 populations of more than 4,000 vertebrate species between 1970 and 2016, also shows that wildlife populations found in freshwater habitats have suffered a decline of 84% - the starkest average population decline in any biome, equivalent to 4% per year since 1970.

Three UCL Centre for Biodiversity & Environment Research academics wrote a section of the report focused on biodiversity collapse on land and how it is driven mainly by land use change, in addition to climate change, overexploitation, pollution, and invasive species.

Co-author Dr Tim Newbold (UCL Centre for Biodiversity & Environment Research) said: “Land use change, whether for agriculture, energy, transportation or housing, has a profound impact on biodiversity as many plants and animals can no longer survive in a modified environment, and the remaining natural wilderness may not be large enough to sustain a species. This is now impacting the makeup of plants and animals, as ecological generalists are more able to survive while more specialist species go extinct.”

An accompanying report published in Nature finds that without ambitious, integrated action combining conservation and restoration efforts with a transformation of the food system, turning the tide of biodiversity change by 2050 or earlier will not be possible.

For global trends of terrestrial biodiversity as affected by land use change to stop declining and start recovering by 2050 or earlier, the researchers say that action is needed in two key areas:

“It will require actions from other sectors, and here we show that the food system will be particularly important, both from the agricultural sector on the supply side, and consumers on the demand side. Our planet urgently needs integrated and coordinated actions.”

Co-author of the Living Planet Report, PhD student Adrienne Etard (UCL Centre for Biodiversity & Environment Research) commented: “Agriculture is the biggest contributor to land use changes that harm biodiversity, so it’s vital that we find ways to reduce the environmental impact of our food system. More efficient farming methods, reducing food waste, and a move towards plant-based diets that require less land, may be necessary to preserve plants and animals across the globe.”

Co-author of the Living Planet Report, PhD student Jessica Williams (UCL Centre for Biodiversity & Environment Research) added: “The impact of land-use change on biodiversity loss cannot be downplayed, particularly as it interacts with other drivers of biodiversity loss such as climate change. For example, not only can changes in land use exacerbate changes in local climate (such as increases in maximum temperatures), fragmented habitats also make it more difficult for a species to move with a changing climate.”