Dr Alexander Piel (UCL Anthropology) and his colleagues suggest that chimpanzees’ known adaptability to varied habitats may be the key to their surviving the environmental effects of climate change. 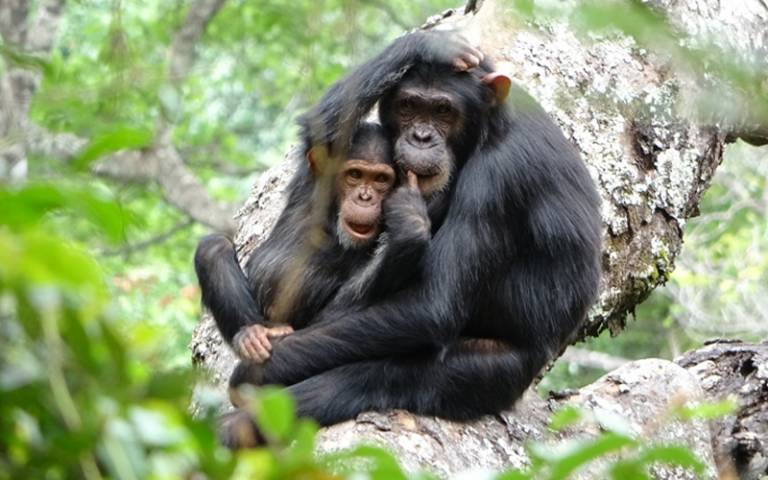 One of the reasons humans are so resilient is our ability to mould our behaviour to ever changing situations. It wasn’t so long ago that many of us hugged when we met. In the middle of a pandemic, in which close contact between people can help spread a deadly virus, we now stand (often awkwardly) two meters apart. This is just one example of our ability to adapt to changing circumstances that can otherwise be harmful. This capacity to cope and respond flexibly to unpredictable changes in our environment has shaped our evolution.

In the past, radically shifting climates caused forests to expand and contract over time, and our early human ancestors had to cope with changes in the amount and types of food and shelter that were available. As forests gradually shrank a couple of million years ago, they were replaced by open habitats with fewer trees – mosaics of savanna and woodland. Early humans were able to adapt to these changes, allowing us to expand into new, less familiar habitats.

Ironically, humans are now driving more extreme climate changes than the planet has ever seen. Many animals may not be able to adapt, but the species which do succeed will rely on being able to change their behaviour to accommodate seasonal shifts in weather and food availability.

Much in the same way that some people use chopsticks while others use a fork or their hands, chimpanzees that live in similar habitats approach a task, like termite fishing, in different ways. They are capable of remarkable behavioural variability, and we think this might have allowed chimpanzees to range in harsher and drier habitats, and in environments that change radically between seasons, akin to our early human ancestors.

As their modern environment changes rapidly with global heating, their past may be their best defence in an uncertain future.

As part of a team led by Ammie Kalan of the Max Planck Institute for Evolutionary Anthropology in Germany, we compiled data from 144 wild chimpanzee communities. These ranged from those living in the wettest tropical forests of central Congo to others living in some of the driest landscapes where chimpanzees are found, bordering the Sahel desert in Senegal.

We wanted to know why some of these populations had diverse repertoires of behaviour, with more types of tool use and local customs such as fishing for algae with sticks, or well digging, and some didn’t. We looked at three possibilities to explain this variation – modern differences in temperature and rainfall patterns, whether the chimpanzee groups lived in forested or savanna habitats, and their distance from forest refugia – areas of woodland that have persisted as shelter for millions of years, even as the climate has fluctuated.

It turns out that all three were important. Chimpanzees living in seasonal habitats – with large temperature swings over the year, or rainfall restricted to certain months – and with fewer trees were more likely to show certain behaviours that their neighbours weren’t, and to show more types of behaviour than chimpanzees living in environments that were seasonally stable, with similar temperatures and weather year-round. The further that chimpanzees lived from historical forest refuges, the greater the different types of behaviour they exhibited too.

Scientists have known for some time that species living in landscapes that change dramatically from season to season are more likely to be highly adapted to their own particular patches. Chimpanzees living in fairly open habitats, like savannas and grasslands where there are large changes in temperature and vegetation between the seasons show local patterns in their behaviour that help them cope with extreme conditions.

In Senegal, for example, chimpanzees live in temperatures that reach 40°C and use caves and take baths in groundwater pools. Elsewhere in Senegal and in Uganda, chimpanzees dig wells in river beds to reach fresh water. These behaviours make sense in light of the challenges that these chimpanzee face on the savanna. In other words, chimpanzees meet variable habitats with variable behaviour.

As forests gradually contracted over millions of years, mosaics of savanna and woodland presented human ancestors with new challenges. It paid to be behaviourally flexible. There were fewer trees in which to escape from predators and as the canopy disappeared, they were more often exposed to soaring temperatures and water tended to evaporate for long stretches of the year. While chimpanzees and humans may have emerged from this period as separate species, they’re likely to have responded to these challenges in similar ways – by adopting new behaviours to help them cope and survive.

As the consequences of climate change bear down on all species today, flexible behaviour in chimpanzees may be more necessary than ever. Global warming threatens more unpredictable weather patterns worldwide. In East Africa in particular, droughts and floods are on the rise. This unpredictability in seasonal weather will be a challenge to all wildlife, but especially those species less familiar with living in a volatile environment. How chimpanzees respond and their future success as a species may come down to how they’ve adapted in the past.

This article was first published in the Conversation on 15 September.