Professor Hiranya Peiris (UCL Physics & Astronomy) has been awarded the Max Born Medal and Prize 2021 for her outstanding contributions to the field of cosmology. 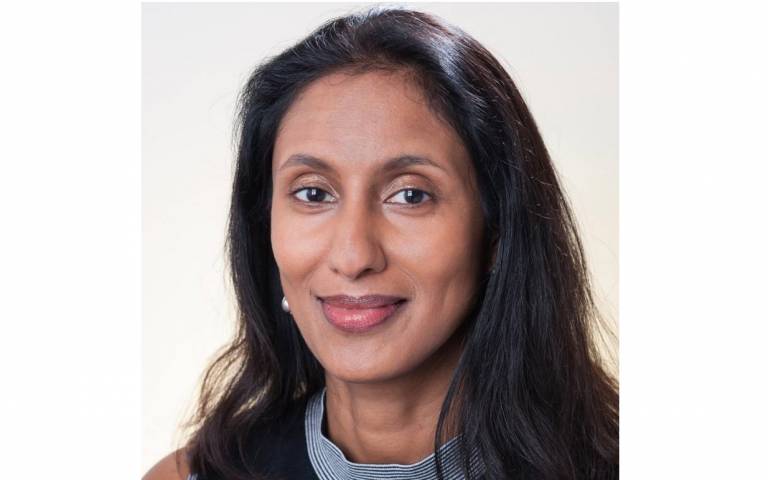 The annual prize is given jointly by the Institute of Physics (IOP) and the German Physical Society (DPG) for outstanding contributions to physics.

The citation noted that Professor Peiris, whose research has helped to further our understanding of the Universe, had created new interdisciplinary connections between cosmology and high-energy physics.

Professor Peiris said: “It is a great honour to receive this recognition from the international physics community, and I am particularly excited by the fact that the award recognises the value of interdisciplinary fundamental research.“

Professor Peiris is Director of the UCL Cosmoparticle Initiative, a five-year programme linking cosmologists, high energy physicists and space scientists at UCL Physics & Astronomy and the Mullard Space Science Laboratory, bringing together the study of the very large (the universe) and the very small (elementary particles). In addition to her appointments at UCL, Professor Peiris is Director of the Oskar Klein Centre for Cosmoparticle Physics in Stockholm.

Her research aims to test fundamental physics using large cosmological datasets such as galaxy surveys and the cosmic microwave background (CMB) – that is, the light left over from the Big Bang.

Professor Peiris is the recipient of many prizes and, in 2018, was part of a team of 27 scientists who received the Breakthrough Prize in Fundamental Physics for “their detailed maps of the early universe”.  This was for work she undertook while a PhD student on the NASA satellite known as Wilkinson Microwave Anisotropy Probe, which helped improve understanding of the Universe’s contents, history, expansion rate and likely fate.